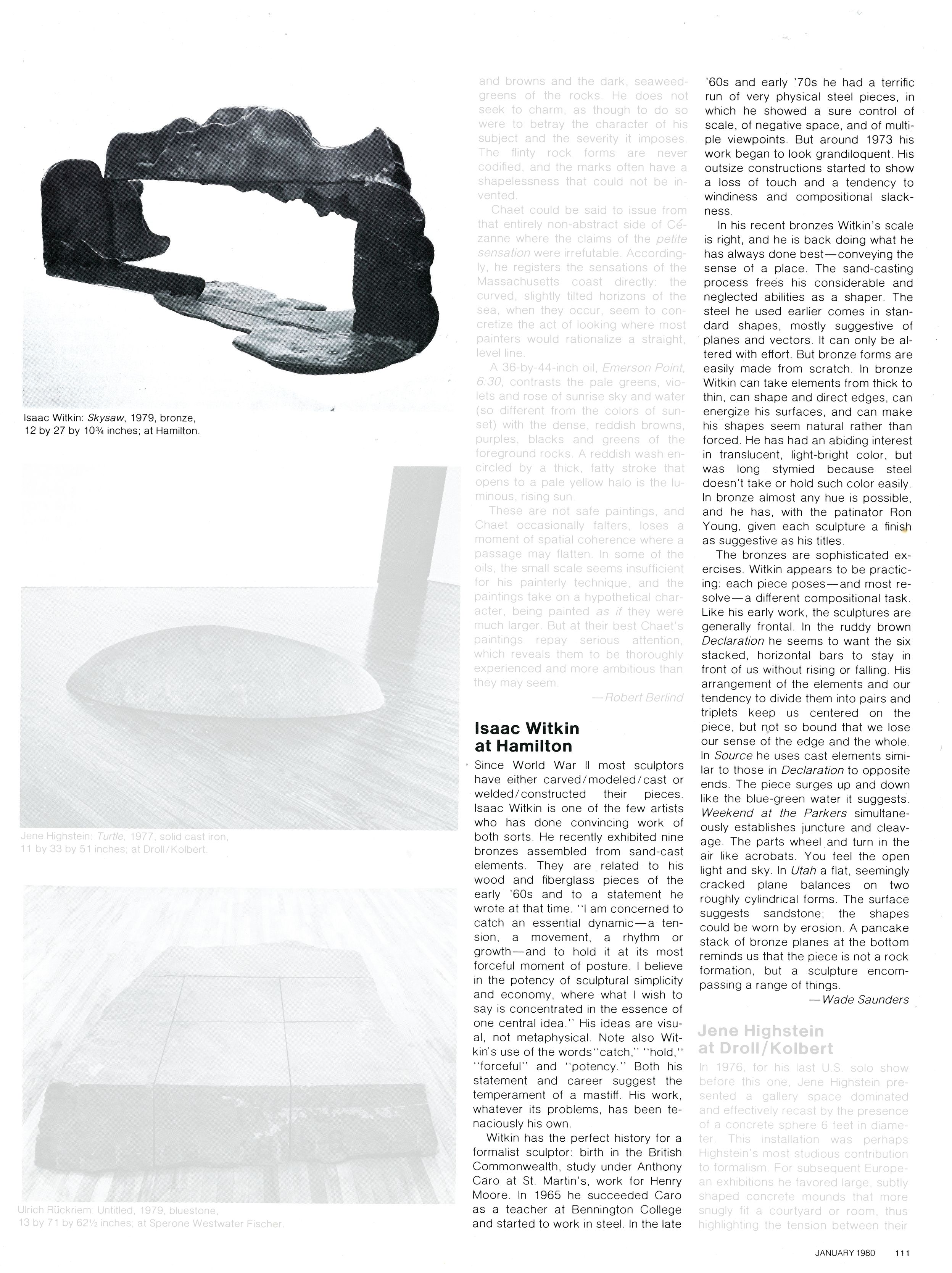 Since World War II most sculptors have either carved/modeled/cast or welded/constructed their pieces. Isaac Witkin is one of the few artists who has done convincing work of both sorts. He recently exhibited nine bronzes assembled from sand-cast elements. They are related to his wood and fiberglass pieces of the early ’60s and to a statement he wrote at that time. “I am concerned to catch an essential dynamic — a tension, a movement, a rhythm or growth—and to hold it at its most forceful moment of posture. I believe in the potency of sculptural simplicity and economy, where what I wish to say is concentrated in the essence of one central idea.” His ideas are visual, not metaphysical. Note also Witkin’s use of the words “catch,” “hold,” “forceful” and “potency.” Both his statement and career suggest the temperament of a mastiff. His work, whatever its problems, has been tenaciously his own.

Witkin has the perfect history for a formalist sculptor: birth in the British Commonwealth, study under Anthony Caro at St. Martin’s, work for Henry Moore. In 1965 he succeeded Caro as a teacher at Bennington College and started to work in steel. In the late ’60s and early ’70s he had a terrific run of very physical steel pieces, in which he showed a sure control of scale, of negative space, and of multiple viewpoints. But around 1973 his work began to look grandiloquent. His outsize constructions started to show a loss of touch and a tendency to windiness and compositional slackness.

In his recent bronzes Witkin’s scale is right, and he is back doing what he has always done best—conveying the sense of a place. The sand-casting process frees his considerable and neglected abilities as a shaper. The steel he used earlier comes in standard shapes, mostly suggestive of planes and vectors. It can only be altered with effort. But bronze forms are easily made from scratch. In bronze Witkin can take elements from thick to thin, can shape and direct edges, can energize his surfaces, and can make his shapes seem natural rather than forced. He has had an abiding interest in translucent, light-bright color, but was long stymied because steel doesn’t take or hold such color easily. In bronze almost any hue is possible, and he has, with the patinator Ron Young, given each sculpture a finish as suggestive as his titles.

The bronzes are sophisticated exercises. Witkin appears to be practicing: each piece poses—and most resolve—a different compositional task. Like his early work, the sculptures are generally frontal. In the ruddy brown Declaration he seems to want the six stacked, horizontal bars to stay in front of us without rising or falling. His arrangement of the elements and our tendency to divide them into pairs and triplets keep us centered on the piece, but not so bound that we lose our sense of the edge and the whole. In Source he uses cast elements similar to those in Declaration to opposite ends. The piece surges up and down like the blue-green water it suggests. Weekend at the Parkers simultaneously establishes juncture and cleavage. The parts wheel and turn in the air like acrobats. You feel the open light and sky. In Utah a flat, seemingly cracked plane balances on two roughly cylindrical forms. The surface suggests sandstone; the shapes could be worn by erosion. A pancake stack of bronze planes at the bottom reminds us that the piece is not a rock formation, but a sculpture encompassing a range of things.