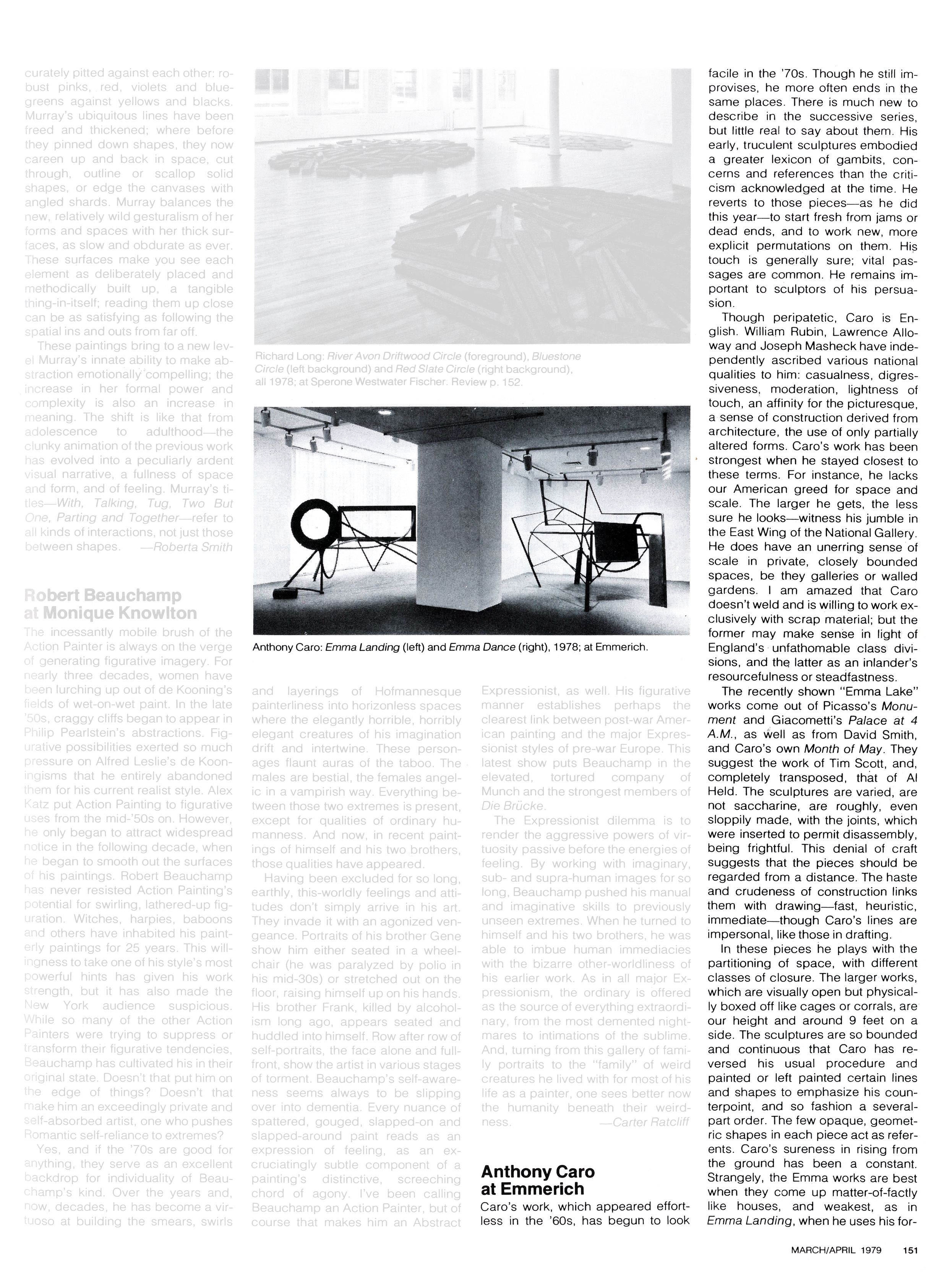 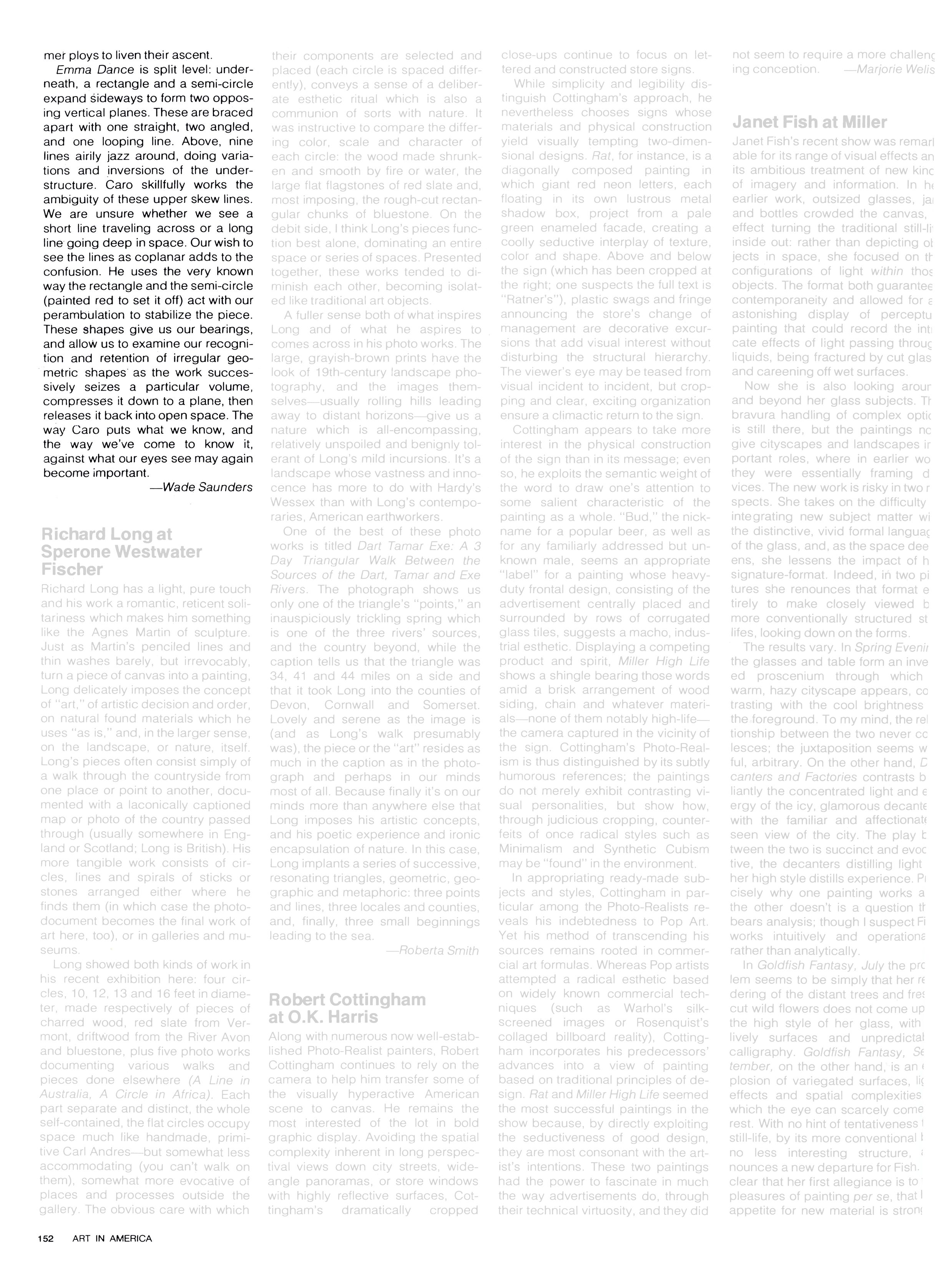 Caro’s work, which appeared effortless in the ‘60s, has begun to look facile in the ‘70s. Though he still improvises, he more often ends in the same places. There is much new to describe in the successive series, but little real to say about them. His early, truculent sculptures embodied a greater lexicon of gambits, concerns and references than the criticism acknowledged at the time. He reverts to those pieces—as he did this year—to start fresh from jams or dead ends, and to work new, more explicit permutations on them. His touch is generally sure; vital passages are common. He remains important to sculptors of his persuasion.

Though peripatetic, Caro is English. William Rubin, Lawrence Alloway and Joseph Masheck have independently ascribed various national qualities to him: casualness, digressiveness, moderation, lightness of touch, an affinity for the picturesque, a sense of construction derived from architecture, the use of only partially altered forms. Caro’s work has been strongest when he stayed closest to these terms. For instance, he lacks our American greed for space and scale. The larger he gets, the less sure he looks—witness his jumble in the East Wing of the National Gallery. He does have an unerring sense of scale in private, closely bounded spaces, be they galleries or walled gardens. I am amazed that Caro doesn’t weld and is willing to work exclusively with scrap material; but the former may make sense in light of England’s unfathomable class divisions, and the latter as an islander’s resourcefulness or steadfastness.

The recently shown “Emma Lake” works come out of Picasso’s Monument and Giacometti’s Palace at 4 A.M., as well as from David Smith, and Caro’s own Month of May. They suggest the work of Tim Scott, and, completely transposed, that of Al Held. The sculptures are varied, are not saccharine, are roughly, even sloppily made, with the joints, which were inserted to permit disassembly, being frightful. This denial of craft suggests that the pieces should be regarded from a distance. The haste and crudeness of construction links them with drawing—fast, heuristic, immediate—though Caro’s lines are impersonal, like those in drafting.

In these pieces he plays with the partitioning of space, with different classes of closure. The larger works, which are visually open but physically boxed off like cages or corrals, are our height and around 9 feet on a side. The sculptures are so bounded and continuous that Caro has reversed his usual procedure and painted or left painted certain lines and shapes to emphasize his counterpoint, and so fashion a several-part order. The few opaque, geometric shapes in each piece act as referents. Caro’s sureness in rising from the ground has been a constant. Strangely, the Emma works are best when they come up matter-of-factly like houses, and weakest, as in Emma Landing, when he uses his former ploys to liven their ascent.

Emma Dance is split level: underneath, a rectangle and a semi-circle expand sideways to form two opposing vertical planes. These are braced apart with one straight, two angled, and one looping line. Above, nine lines airily jazz around, doing variations and inversions of the understructure. Caro skillfully works the ambiguity of these upper skew lines. We are unsure whether we see a short line traveling across or a long line going deep in space. Our wish to see the lines as coplanar adds to the confusion. He uses the very known way the rectangle and the semi-circle (painted red to set it off) act with our perambulation to stabilize the piece. These shapes give us our bearings, and allow us to examine our recognition and retention of irregular geometric shapes as the work successively seizes a particular volume, compresses it down to a plane, then releases it back into open space. The way Caro puts what we know, and the way we’ve come to know it, against what our eyes see may again become important.