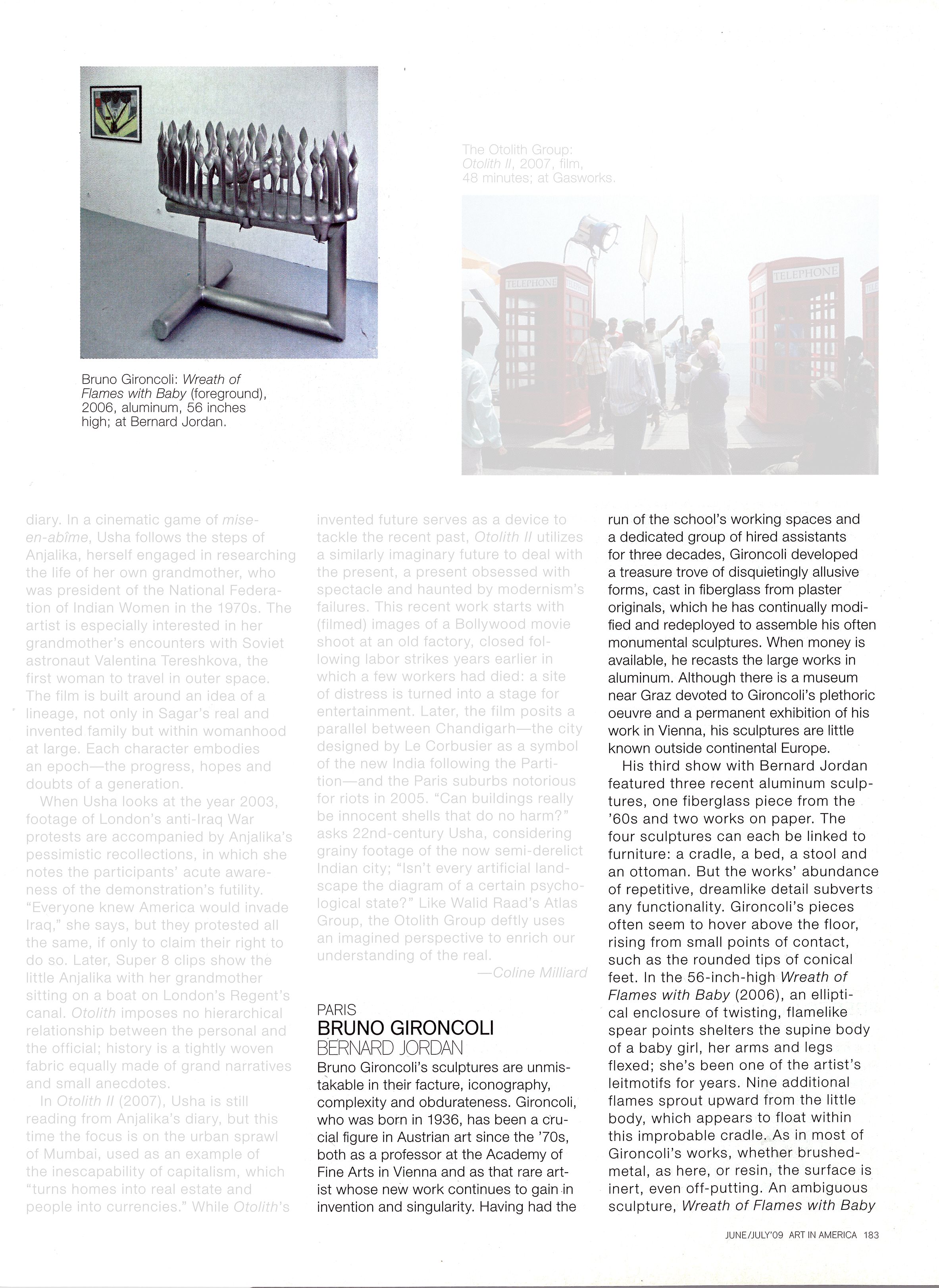 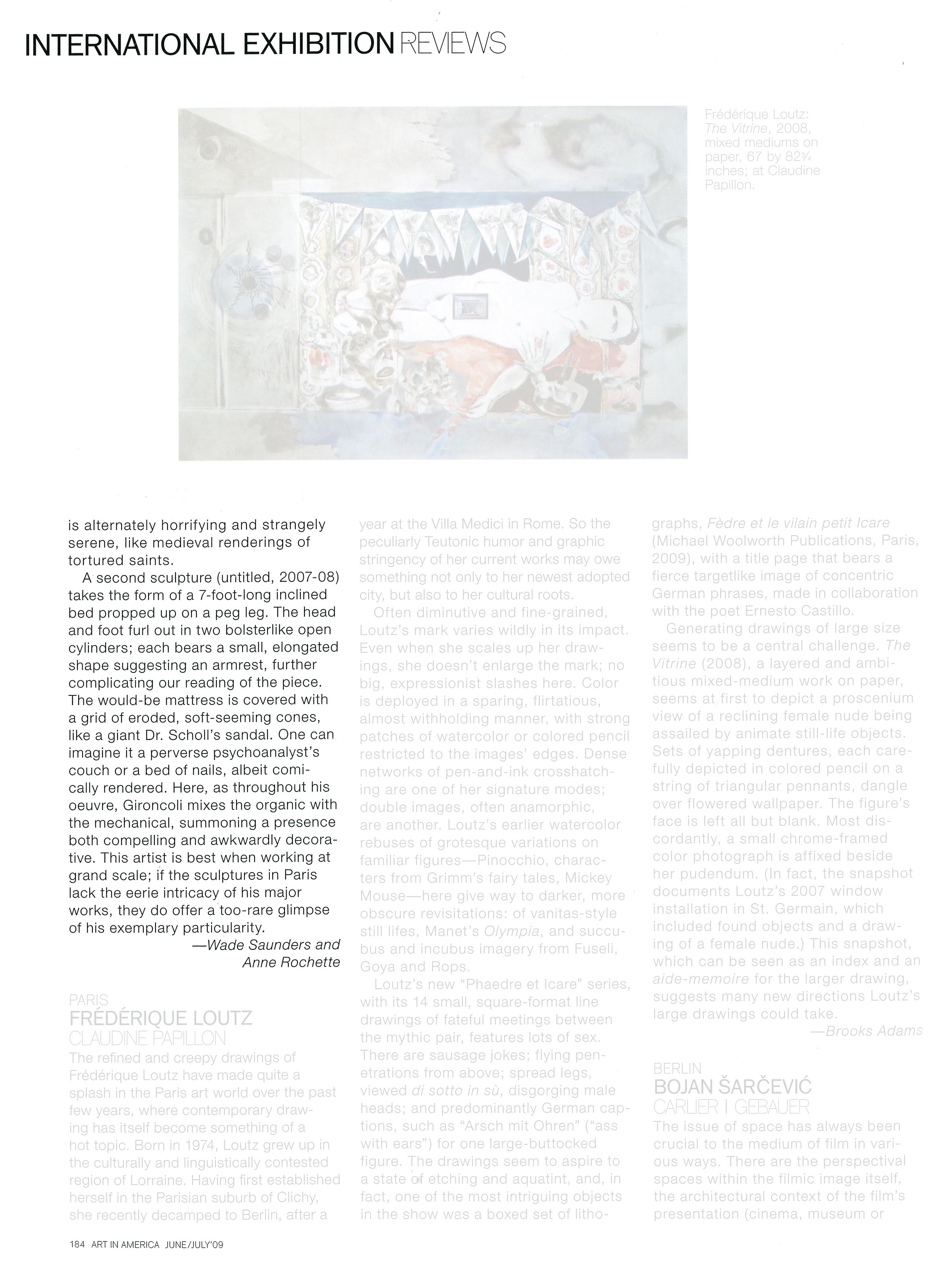 Bruno Gironcoli’s sculptures are unmistakable in their facture, iconography, complexity and obdurateness. Gironcoli, who was born in 1936, has been a crucial figure in Austrian art since the 70s, both as a professor at the Academy of Fine Arts in Vienna and as that rare artist whose new work continues to gain in invention and singularity. Having had the run of the school’s working spaces and a dedicated group of hired assistants for three decades, Gironcoli developed a treasure trove of disquietingly allusive forms, cast in fiberglass from plaster originals, which he has continually modified and redeployed to assemble his often monumental sculptures. When money is available, he recasts the large works in aluminum. Although there is a museum near Graz devoted to Gironcoli’s plethoric oeuvre and a permanent exhibition of his work in Vienna, his sculptures are little known outside continental Europe.

His third show with Bernard Jordan featured three recent aluminum sculptures, one fiberglass piece from the ’60s and two works on paper. The four sculptures can each be linked to furniture: a cradle, a bed, a stool and an ottoman. But the works’ abundance of repetitive, dreamlike detail subverts any functionality. Gironcoli’s pieces often seem to hover above the floor, rising from small points of contact, such as the rounded tips of conical feet. In the 56-inch-high Wreath of Flames with Baby (2006), an elliptical enclosure of twisting, flamelike spear points shelters the supine body of a baby girl, her arms and legs flexed; she’s been one of the artist’s leitmotifs for years. Nine additional flames sprout upward from the little body, which appears to float within this improbable cradle. As in most of Gironcoli’s works, whether brushed- metal, as here, or resin, the surface is inert, even off-putting. An ambiguous sculpture, Wreath of Flames with Baby is alternately horrifying and strangely serene, like medieval renderings of tortured saints.

A second sculpture (untitled, 2007-08) takes the form of a 7-foot-long inclined bed propped up on a peg leg. The head and foot furl out in two bolsterlike open cylinders; each bears a small, elongated shape suggesting an armrest, further complicating our reading of the piece. The would-be mattress is covered with a grid of eroded, soft-seeming cones, like a giant Dr. Scholl’s sandal. One can imagine it a perverse psychoanalyst’s couch or a bed of nails, albeit comically rendered. Here, as throughout his oeuvre, Gironcoli mixes the organic with the mechanical, summoning a presence both compelling and awkwardly decorative. This artist is best when working at grand scale; if the sculptures in Paris lack the eerie intricacy of his major works, they do offer a too-rare glimpse of his exemplary particularity.