Vito Acconci at International with Monument 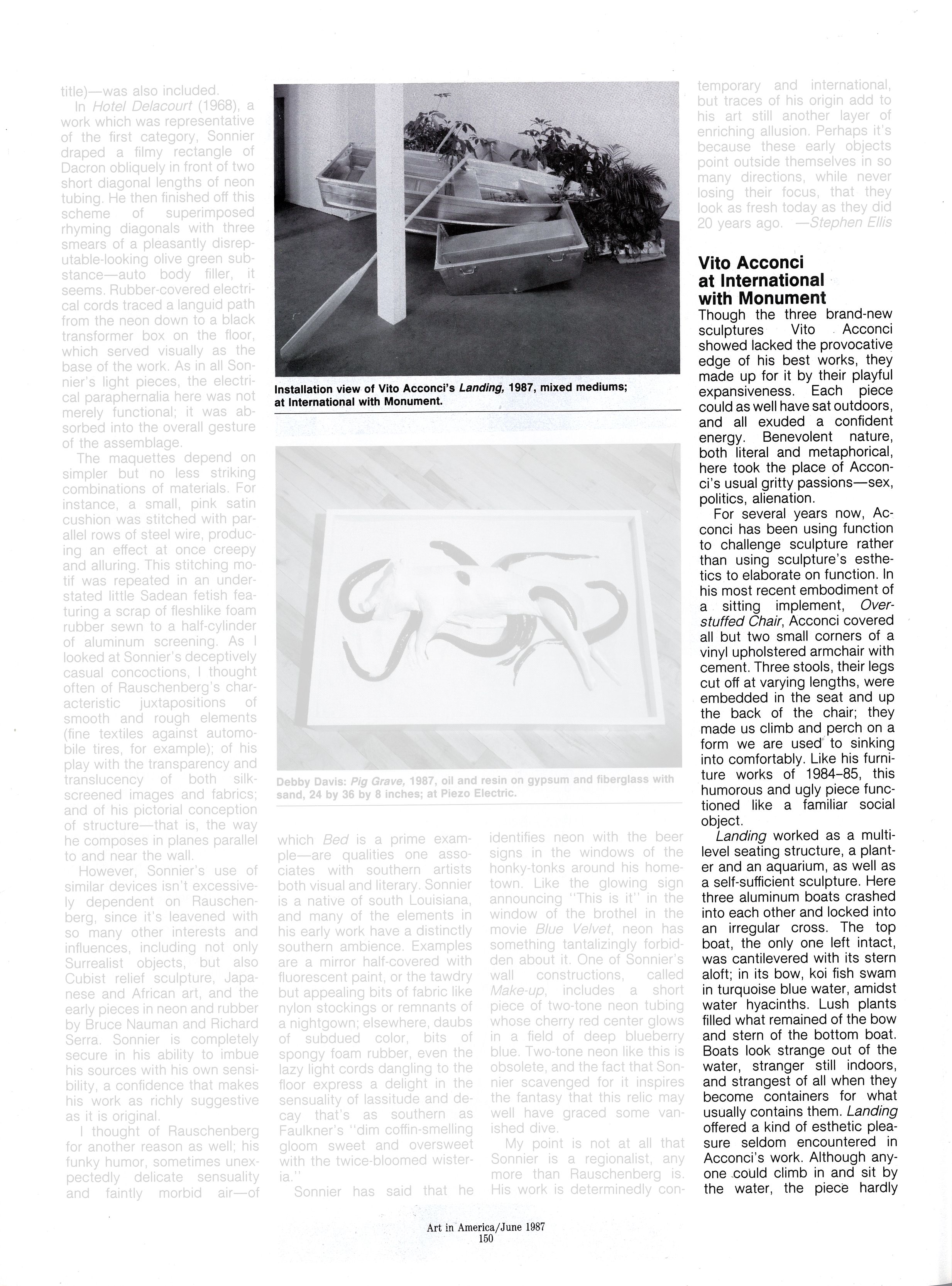 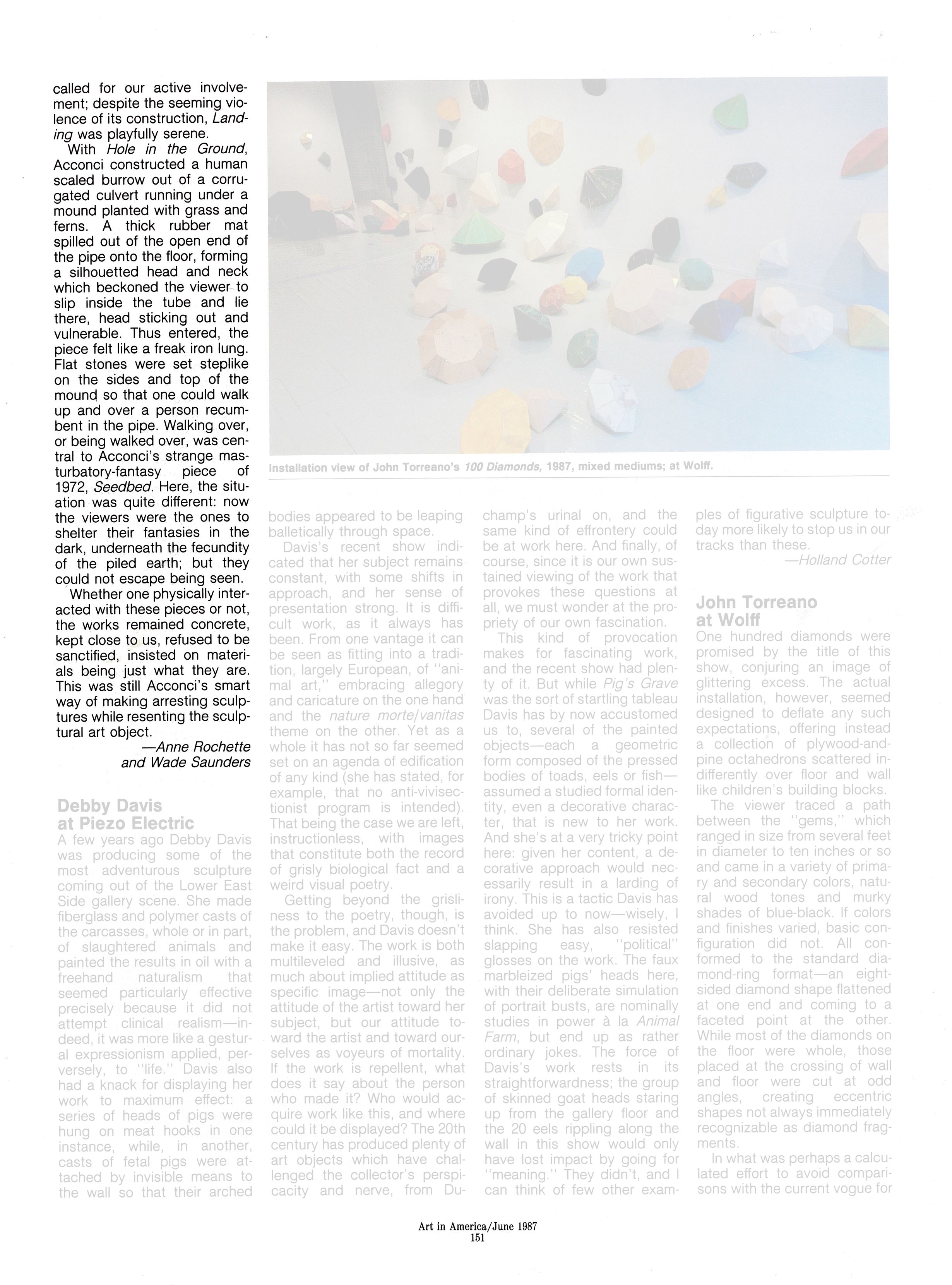 Though the three brand-new sculptures Vito Acconci showed lacked the provocative edge of his best works, they made up for it by their playful expansiveness. Each piece could as well have sat outdoors, and all exuded a confident energy. Benevolent nature, both literal and metaphorical, here took the place of Acconci’s usual gritty passions—sex, politics, alienation.

For several years now, Acconci has been using function to challenge sculpture rather than using sculpture’s esthetics to elaborate on function. In his most recent embodiment of a sitting implement, Overstuffed Chair, Acconci covered all but two small corners of a vinyl upholstered armchair with cement. Three stools, their legs cut off at varying lengths, were embedded in the seat and up the back of the chair; they made us climb and perch on a form we are used to sinking into comfortably. Like his furniture works of 1984-85, this humorous and ugly piece functioned like a familiar social object.

Landing worked as a multilevel seating structure, a planter and an aquarium, as well as a self-sufficient sculpture. Here three aluminum boats crashed into each other and locked into an irregular cross. The top boat, the only one left intact, was cantilevered with its stern aloft; in its bow, koi fish swam in turquoise blue water, amidst water hyacinths. Lush plants filled what remained of the bow and stern of the bottom boat. Boats look strange out of the water, stranger still indoors, and strangest of all when they become containers for what usually contains them. Landing offered a kind of esthetic pleasure seldom encountered in Acconci’s work. Although anyone could climb in and sit by the water, the piece hardly called for our active involvement; despite the seeming violence of its construction, Landing was playfully serene.

With Hole in the Ground, Acconci constructed a human scaled burrow out of a corrugated culvert running under a mound planted with grass and ferns. A thick rubber mat spilled out of the open end of the pipe onto the floor, forming a silhouetted head and neck which beckoned the viewer to slip inside the tube and lie there, head sticking out and vulnerable. Thus entered, the piece felt like a freak iron lung. Flat stones were set steplike on the sides and top of the mound so that one could walk up and over a person recumbent in the pipe. Walking over, or being walked over, was central to Acconci’s strange masturbatory-fantasy piece of 1972, Seedbed. Here, the situation was quite different, now the viewers were the ones to shelter their fantasies in the dark, underneath the fecundity of the piled earth; but they could not escape being seen.

Whether one physically interacted with these pieces or not, the works remained concrete, kept close to us, refused to be sanctified, insisted on materials being just what they are. This was still Acconci’s smart way of making arresting sculptures while resenting the sculptural art object.