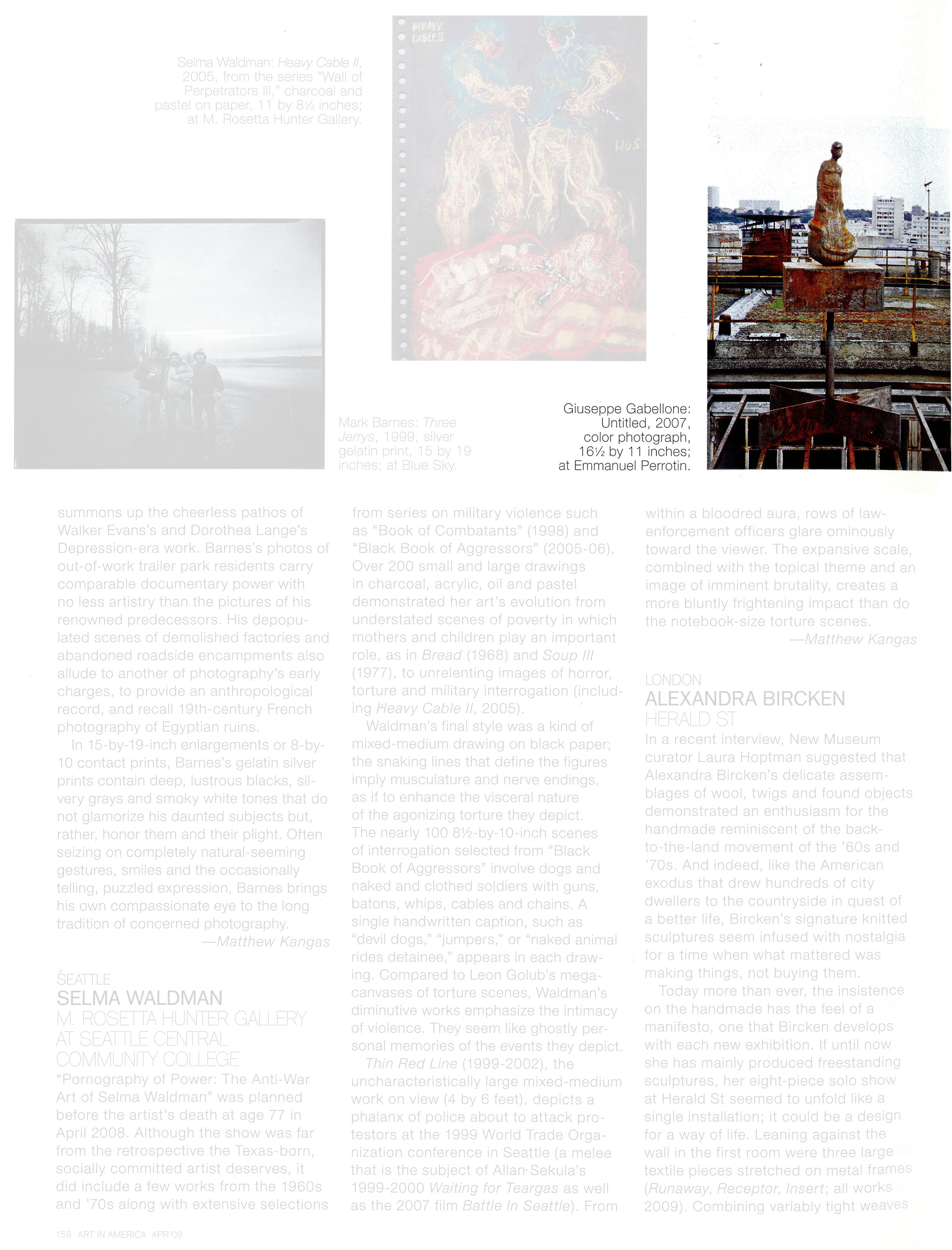 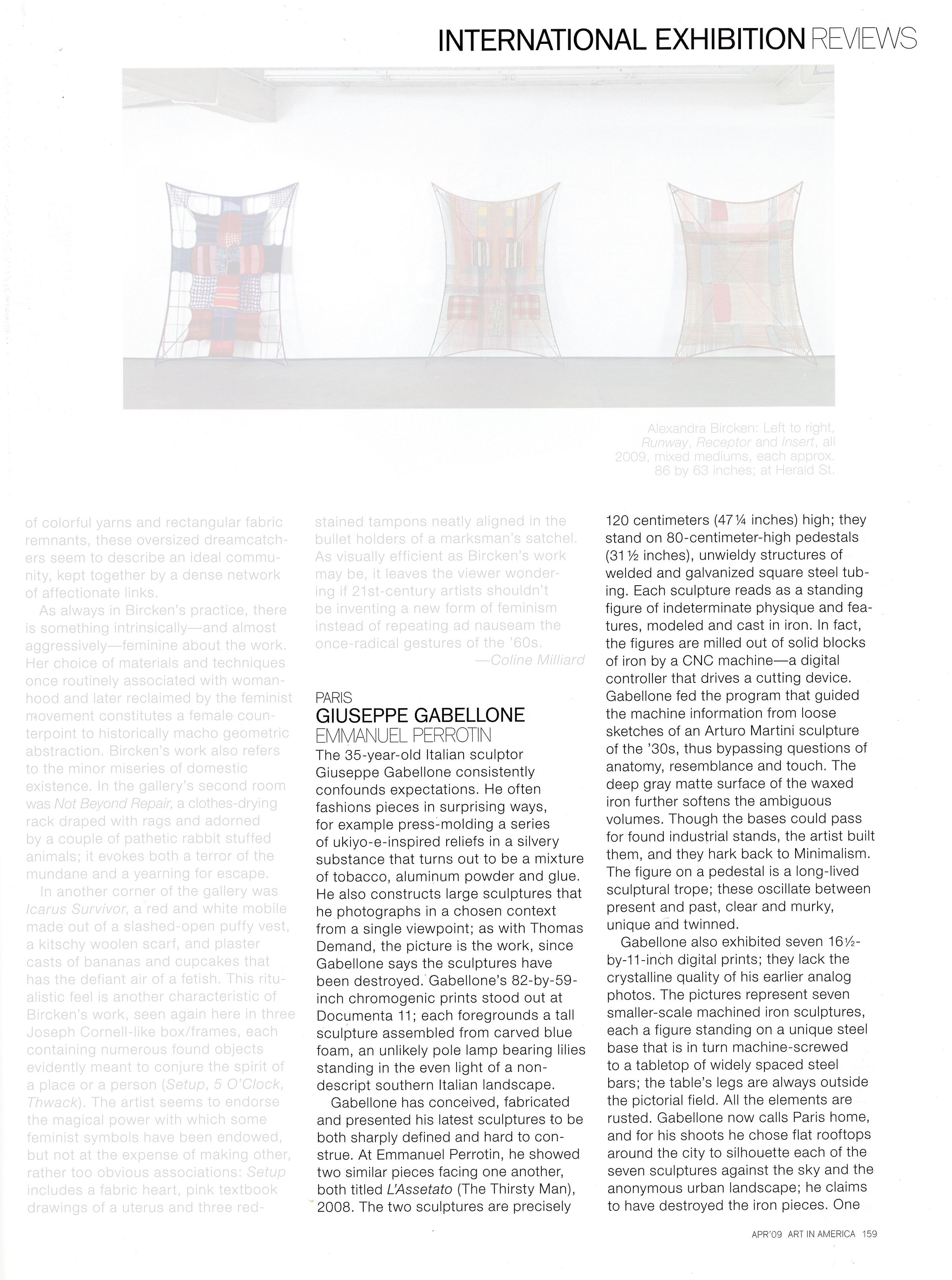 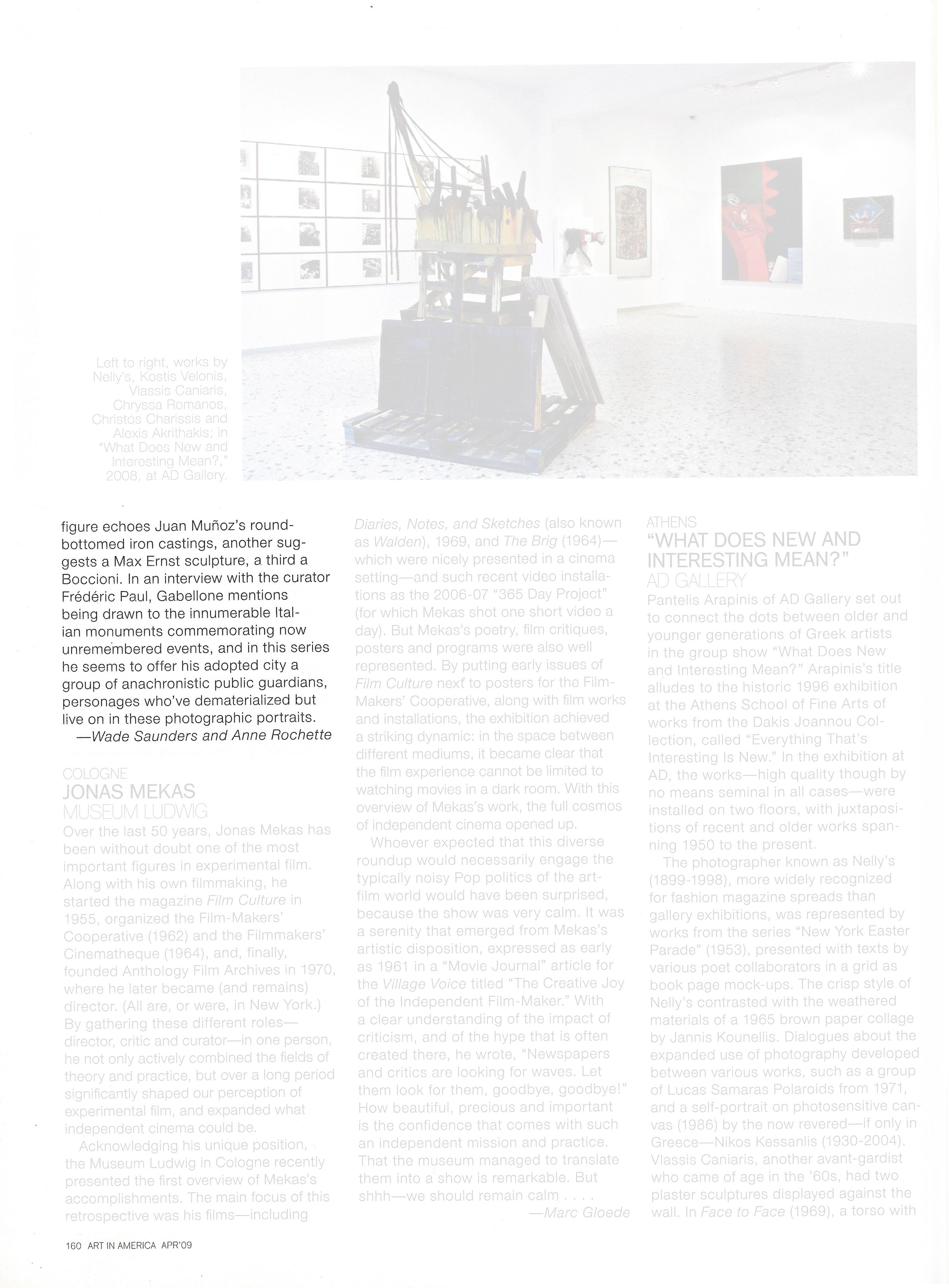 The 35-year-old Italian sculptor Giuseppe Gabellone consistently confounds expectations. He often fashions pieces in surprising ways, for example press-molding a series of ukiyo-e-inspired reliefs in a silvery substance that turns out to be a DIY mixture of tobacco, aluminum powder and glue. He also constructs large sculptures that he photographs in a chosen context from a single viewpoint, and then destroys; the picture is the work. Gabellone’s 82-by-59-inch chromogenic prints stood out at Documenta 11; each foregrounds a tall sculpture assembled from carved blue foam, an unlikely pole lamp bearing lilies, standing in the even light of a nondescript southern Italian landscape.

Gabellone has conceived, fabricated and presented his latest sculptures to be both sharply defined and hard to construe. At Emmanuel Perrotin, he showed two similar pieces facing one another, both titled L’Assetato (The Thirsty Man), 2008. The two sculptures are precisely 120 centimeters (47¼ inches) tall; they stand on 80-centimeter-high pedestals (31½-inches), unwieldy structures of square steel tubing welded and galvanized. Each sculpture reads as a standing figure of indeterminate physique and features, modeled and cast in iron. In fact, the figures are milled out of solid blocks of iron by a CNC machine—a digital controller that drives a cutting device. Gabellone fed the program that guided the machine information from loose sketches of an Arturo Martini sculpture of the ’30s thus bypassing questions of anatomy, resemblance and touch. The deep gray matte surface of the waxed iron further softens the ambiguous volumes. Though the bases could pass for found industrial stands, the artist built them, and they hark back to Minimalism. The figure on a pedestal is a long-lived sculptural trope; these oscillate between present and past, clear and murky, unique and twinned. The staying power of this strange pairing of deceptively traditional works owes much to the subtle precision of the artist’s choices.

Gabellone also exhibited seven 16-by-11-inch digital prints; they lack the crystalline quality of his earlier analog photos. The pictures represent seven smaller-scale machined iron sculptures, each a figure standing on a unique steel base that is in turn machine-screwed to a tabletop of widely spaced steel bars; the table’s legs are always outside the pictorial field. All the elements are rusted. Gabellone now calls Paris home, and for his shoots he chose flat rooftops around the city to silhouette each of the seven sculptures against the sky and the anonymous urban landscape; he claims to have destroyed the iron pieces. One figure echoes Juan Muñoz’s round-bottomed iron castings, another suggests a Max Ernst sculpture, a third and fourth Boccionis; the figures appear oddly engaged with their contexts. In an interview with the curator Frédéric Paul, published in a 2008 catalog, Gabellone mentions being drawn to the innumerable Italian monuments commemorating now unremembered events, and in this series he seems to offer his adopted city a group of anachronistic public guardians, personages who’ve dematerialized but live on in these photographic portraits.