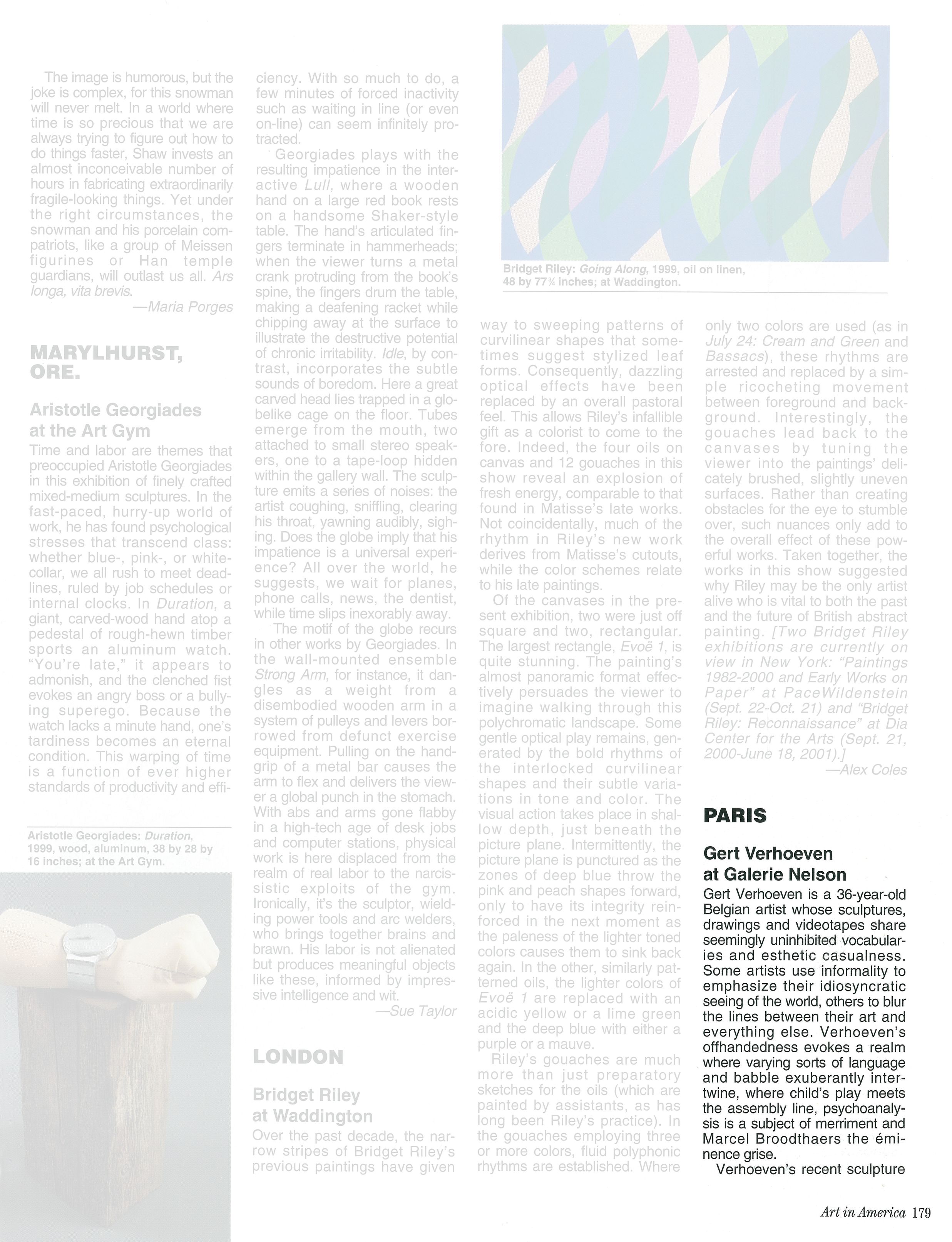 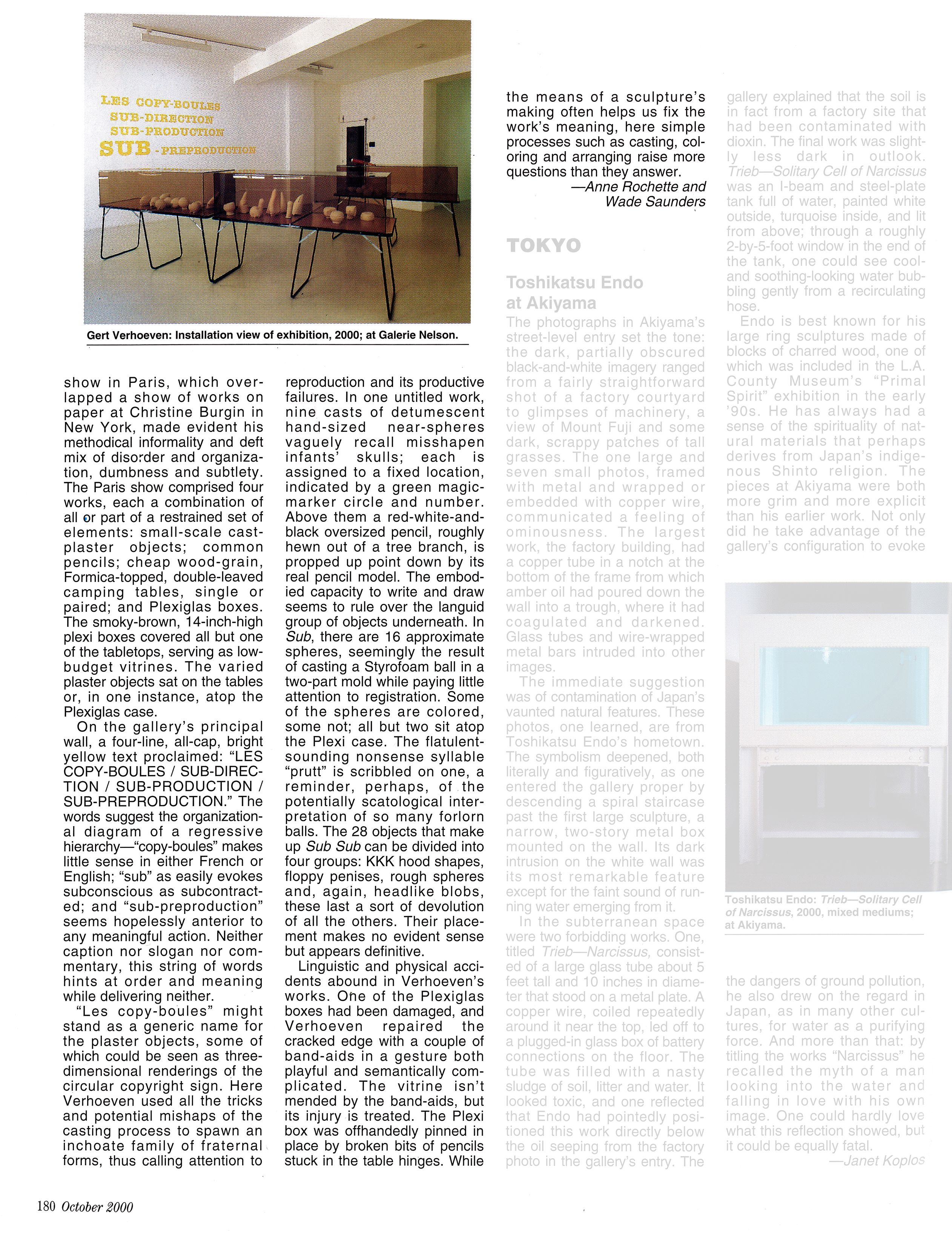 Gert Verhoeven is a 36-year-old Belgian artist whose sculptures, drawings and videotapes share seemingly uninhibited vocabularies and esthetic casualness. Some artists use informality to emphasize their idiosyncratic seeing of the world, others to blur the lines between their art and everything else. Verhoeven’s offhandedness evokes a realm where varying sorts of language and babble exuberantly intertwine, where child’s play meets the assembly line, psychoanalysis is a subject of merriment and Marcel Broodthaers the éminence grise.

Verhoeven’s recent sculpture show in Paris, which overlapped a show of works on paper at Christine Burgin in New York, made evident his methodical informality and deft mix of disorder and organization, dumbness and subtlety. The Paris show comprised four works, each a combination of all or part of a restrained set of elements: small-scale cast- plaster objects; common pencils; cheap wood-grain, Formica-topped, double-leaved camping tables, single or paired; and Plexiglas boxes. The smoky-brown, 14-inch-high plexi boxes covered all but one of the tabletops, serving as low- budget vitrines. The varied plaster objects sat on the tables or, in one instance, atop the Plexiglas case.

On the gallery’s principal wall, a four-line, all-cap, bright yellow text proclaimed: “LES COPY-BOULES / SUB-DIRECTION / SUB-PRODUCTION / SUB-PREPRODUCTION.” The words suggest the organizational diagram of a regressive hierarchy—“copy-boules” makes little sense in either French or English; “sub” as easily evokes subconscious as subcontracted; and “sub-preproduction” seems hopelessly anterior to any meaningful action. Neither caption nor slogan nor commentary, this string of words hints at order and meaning while delivering neither.

“Les copy-boules” might stand as a generic name for the plaster objects, some of which could be seen as three-dimensional renderings of the circular copyright sign. Here Verhoeven used all the tricks and potential mishaps of the casting process to spawn an inchoate family of fraternal forms, thus calling attention to reproduction and its productive failures. In one untitled work, nine casts of detumescent hand-sized near-spheres vaguely recall misshapen infants’ skulls; each is assigned to a fixed location, indicated by a green magic-marker circle and number. Above them a red-white-and-black oversized pencil, roughly hewn out of a tree branch, is propped up point down by its real pencil model. The embodied capacity to write and draw seems to rule over the languid group of objects underneath. In Sub, there are 16 approximate spheres, seemingly the result of casting a Styrofoam ball in a two-part mold while paying little attention to registration. Some of the spheres are colored, some not; all but two sit atop the Plexi case. The flatulent-sounding nonsense syllable “prutt” is scribbled on one, a reminder, perhaps, of the potentially scatological interpretation of so many forlorn balls. The 28 objects that make up Sub Sub can be divided into four groups: KKK hood shapes, floppy penises, rough spheres and, again, headlike blobs, these last a sort of devolution of all the others. Their placement makes no evident sense but appears definitive.

Linguistic and physical accidents abound in Verhoeven’s works. One of the Plexiglas boxes had been damaged, and Verhoeven repaired the cracked edge with a couple of band-aids in a gesture both playful and semantically complicated. The vitrine isn’t mended by the band-aids, but its injury is treated. The Plexi box was offhandedly pinned in place by broken bits of pencils stuck in the table hinges. While the means of a sculpture’s making often helps us fix the work’s meaning, here simple processes such as casting, coloring and arranging raise more questions than they answer.