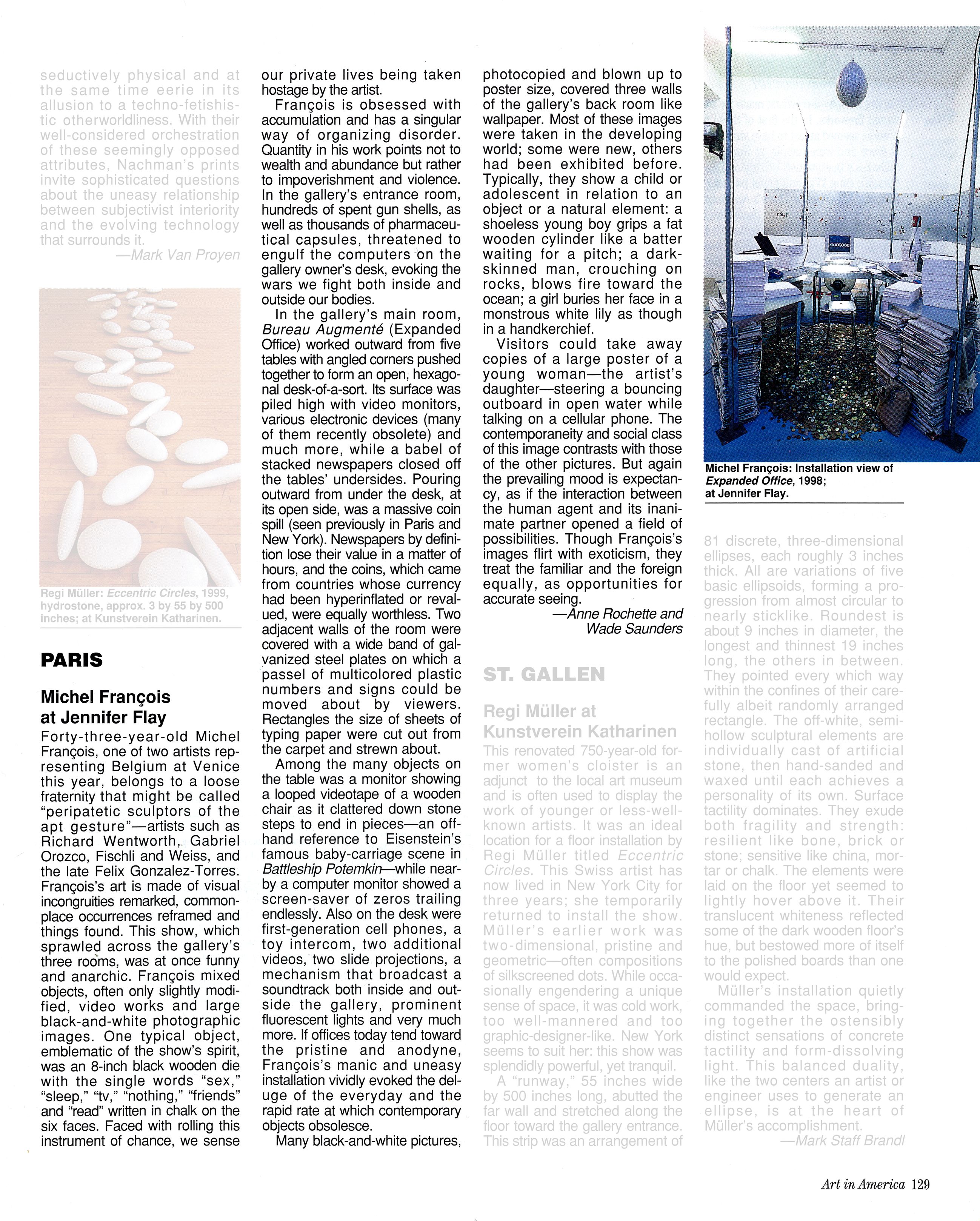 Forty-three-year-old Michel François, one of two artists representing Belgium at Venice this year, belongs to a loose fraternity that might be called “peripatetic sculptors of the apt gesture”—artists such as Richard Wentworth, Gabriel Orozco, Fischli and Weiss, and the late Felix Gonzalez-Torres. François’s art is made of visual incongruities remarked, commonplace occurrences reframed and things found. This show, which sprawled across the gallery’s three rooms, was at once funny and anarchic. François mixed objects, often only slightly modified, video works and large black-and-white photographic images. One typical object, emblematic of the show’s spirit, was an 8-inch black wooden die with the single words “sex,” “sleep,” “tv,” “nothing,” “friends” and “read” written in chalk on the six faces. Faced with rolling this instrument of chance, we sense our private lives being taken hostage by the artist.

François is obsessed with accumulation and has a singular way of organizing disorder. Quantity in his work points not to wealth and abundance but rather to impoverishment and violence. In the gallery’s entrance room, hundreds of spent gun shells, as well as thousands of pharmaceutical capsules, threatened to engulf the computers on the gallery owner’s desk, evoking the wars we fight both inside and outside our bodies.

In the gallery’s main room, Bureau Augmenté (Expanded Office) worked outward from five tables with angled corners pushed together to form an open, hexagonal desk-of-a-sort. Its surface was piled high with video monitors, various electronic devices (many of them recently obsolete) and much more, while a babel of stacked newspapers closed off the tables’ undersides. Pouring outward from under the desk, at its open side, was a massive coin spill (seen previously in Paris and New York). Newspapers by definition lose their value in a matter of hours, and the coins, which came from countries whose currency had been hyperinflated or revalued, were equally worthless. Two adjacent walls of the room were covered with a wide band of galvanized steel plates on which a passel of multicolored plastic numbers and signs could be moved about by viewers. Rectangles the size of sheets of typing paper were cut out from the carpet and strewn about.

Among the many objects on the table was a monitor showing a looped videotape of a wooden chair as it clattered down stone steps to end in pieces—an offhand reference to Eisenstein’s famous baby-carriage scene in Battleship Potemkin—while nearby a computer monitor showed a screen-saver of zeros trailing endlessly. Also on the desk were first-generation cell phones, a toy intercom, two additional videos, two slide projections, a mechanism that broadcast a soundtrack both inside and outside the gallery, prominent fluorescent lights and very much more. If offices today tend toward the pristine and anodyne, François’s manic and uneasy installation vividly evoked the deluge of the everyday and the rapid rate at which contemporary objects obsolesce.

Many black-and-white pictures, photocopied and blown up to poster size, covered three walls of the gallery’s back room like wallpaper. Most of these images were taken in the developing world; some were new, others had been exhibited before. Typically, they show a child or adolescent in relation to an object or a natural element: a shoeless young boy grips a fat wooden cylinder like a batter waiting for a pitch; a dark-skinned man, crouching on rocks, blows fire toward the ocean; a girl buries her face in a monstrous white lily as though in a handkerchief.

Visitors could take away copies of a large poster of a young woman—the artist’s daughter—steering a bouncing outboard in open water while talking on a cellular phone. The contemporaneity and social class of this image contrasts with those of the other pictures. But again the prevailing mood is expectancy, as if the interaction between the human agent and its inanimate partner opened a field of possibilities. Though François’s images flirt with exoticism, they treat the familiar and the foreign equally, as opportunities for accurate seeing.