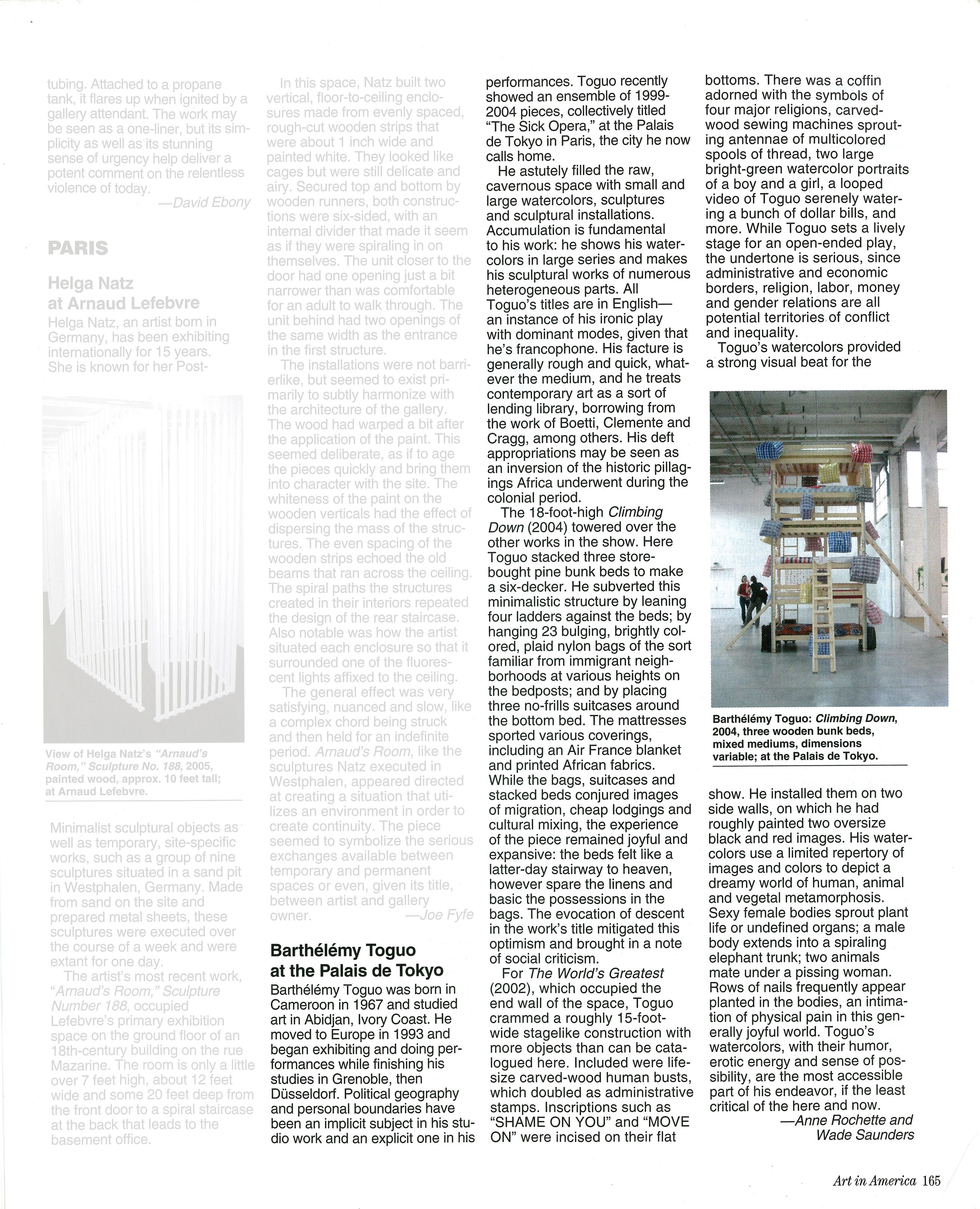 Barthélémy Toguo was born in Cameroon in 1967 and studied art in Abidjan, Ivory Coast. He moved to Europe in 1993 and began exhibiting and doing performances while finishing his studies in Grenoble, then Düsseldorf. Political geography and personal boundaries have been an implicit subject in his studio work and an explicit one in his performances. Toguo recently showed an ensemble of 1999- 2004 pieces, collectively titled “The Sick Opera,” at the Palais de Tokyo in Paris, the city he now calls home.

He astutely filled the raw, cavernous space with small and large watercolors, sculptures and sculptural installations. Accumulation is fundamental to his work: he shows his water- colors in large series and makes his sculptural works of numerous heterogeneous parts. All Toguo’s titles are in English—an instance of his ironic play with dominant modes, given that he’s francophone. His facture is generally rough and quick, whatever the medium, and he treats contemporary art as a sort of lending library, borrowing from the work of Boetti, Clemente and Cragg, among others. His deft appropriations may be seen as an inversion of the historic pillagings Africa underwent during the colonial period.

The 18-foot-high Climbing Down (2004) towered over the other works in the show. Here Toguo stacked three store-bought pine bunk beds to make a six-decker. He subverted this minimalistic structure by leaning four ladders against the beds; by hanging 23 bulging, brightly colored, plaid nylon bags of the sort familiar from immigrant neighborhoods at various heights on the bedposts; and by placing three no-frills suitcases around the bottom bed. The mattresses sported various coverings, including an Air France blanket and printed African fabrics. While the bags, suitcases and stacked beds conjured images of migration, cheap lodgings and cultural mixing, the experience of the piece remained joyful and expansive: the beds felt like a latter-day stairway to heaven, however spare the linens and basic the possessions in the bags. The evocation of descent in the work’s title mitigated this optimism and brought in a note of social criticism.

For The World’s Greatest (2002), which occupied the end wall of the space, Toguo crammed a roughly 15-foot- wide stagelike construction with more objects than can be catalogued here. Included were life-size carved-wood human busts, which doubled as administrative stamps. Inscriptions such as “SHAME ON YOU” and “MOVE ON” were incised on their flat bottoms. There was a coffin adorned with the symbols of four major religions, carved- wood sewing machines sprouting antennae of multicolored spools of thread, two large bright-green watercolor portraits of a boy and a girl, a looped video of Toguo serenely watering a bunch of dollar bills, and more. While Toguo sets a lively stage for an open-ended play, the undertone is serious, since administrative and economic borders, religion, labor, money and gender relations are all potential territories of conflict and inequality.

Toguo’s watercolors provided a strong visual beat for the show. He installed them on two side walls, on which he had roughly painted two oversize black and red images. His water-colors use a limited repertory of images and colors to depict a dreamy world of human, animal and vegetal metamorphosis. Sexy female bodies sprout plant life or undefined organs; a male body extends into a spiraling elephant trunk; two animals mate under a pissing woman. Rows of nails frequently appear planted in the bodies, an intimation of physical pain in this generally joyful world. Toguo’s watercolors, with their humor, erotic energy and sense of possibility, are the most accessible part of his endeavor, if the least critical of the here and now.