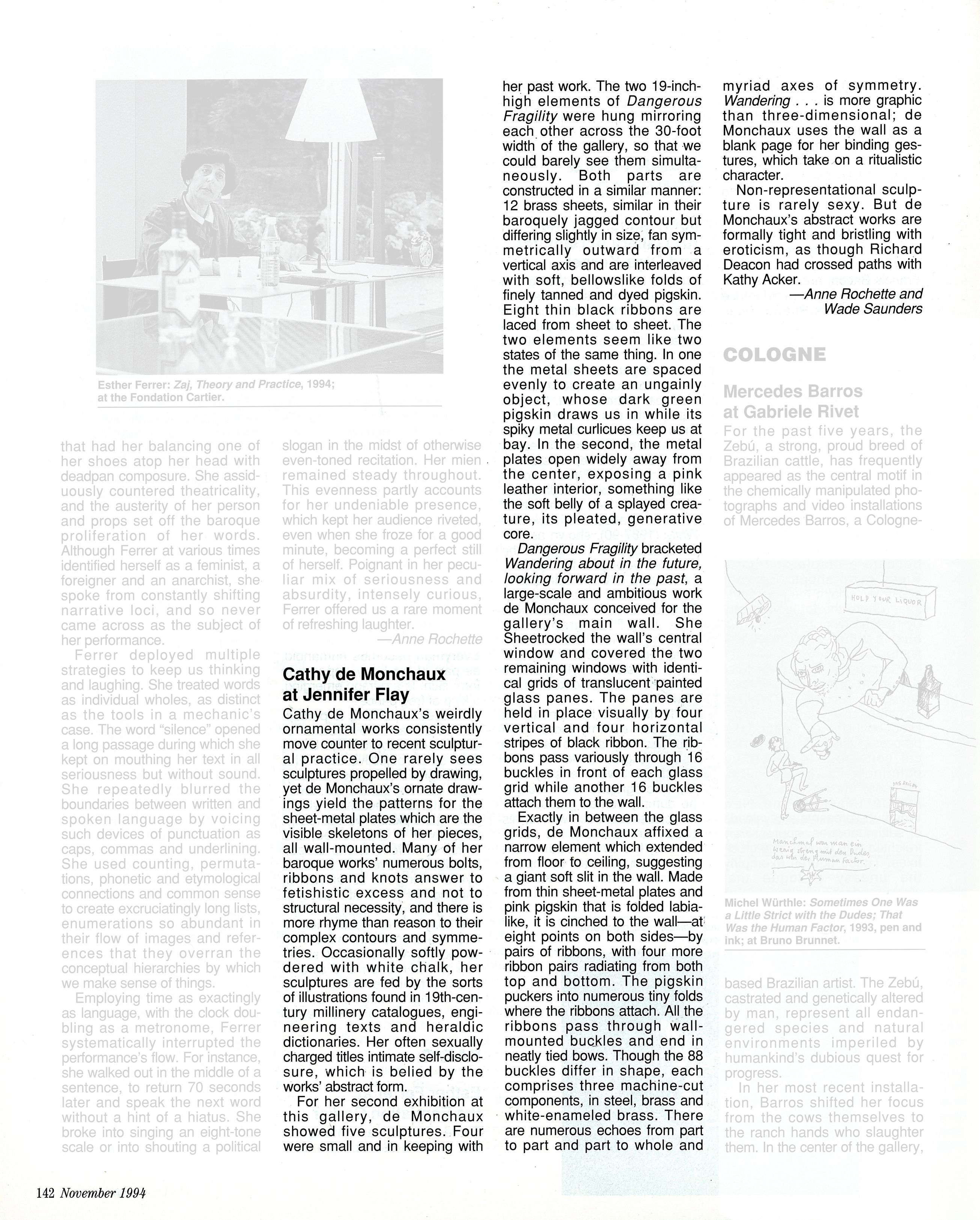 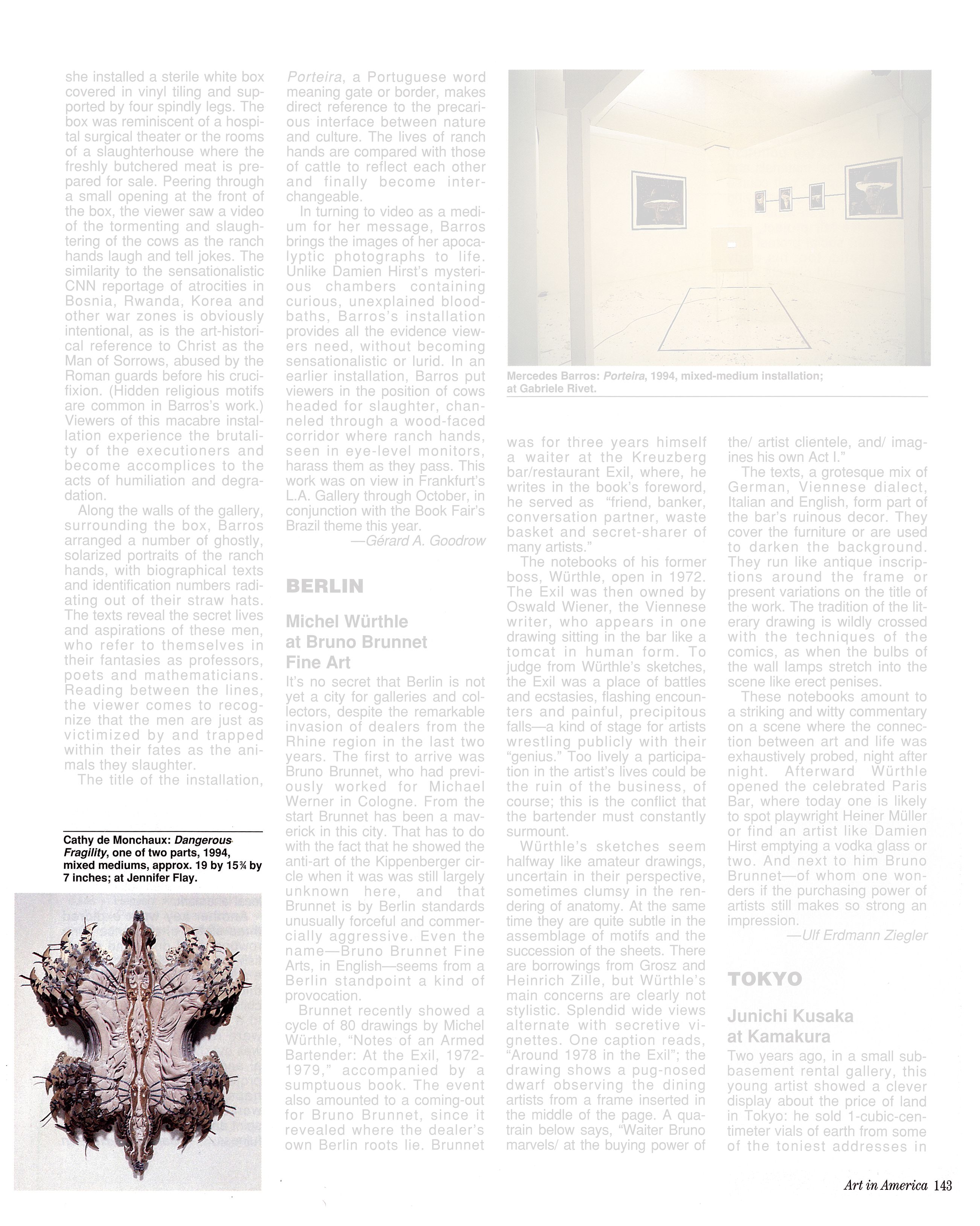 Cathy de Monchaux’s weirdly ornamental works consistently move counter to recent sculptural practice. One rarely sees sculptures propelled by drawing, yet de Monchaux’s ornate drawings yield the patterns for the sheet-metal plates which are the visible skeletons of her pieces, all wall-mounted. Many of her baroque works’ numerous bolts, ribbons and knots answer to fetishistic excess and not to structural necessity, and there is more rhyme than reason to their complex contours and symmetries. Occasionally softly powdered with white chalk, her sculptures are fed by the sorts of illustrations found in 19th-century millinery catalogues, engineering texts and heraldic dictionaries. Her often sexually charged titles intimate self-disclosure, which is belied by the works’ abstract form.

For her second exhibition at this gallery, de Monchaux showed five sculptures. Four were small and in keeping with her past work. The two 19-inch- high elements of Dangerous Fragility were hung mirroring each other across the 30-foot width of the gallery, so that we could barely see them simultaneously. Both parts are constructed in a similar manner: 12 brass sheets, similar in their baroquely jagged contour but differing slightly in size, fan symmetrically outward from a vertical axis and are interleaved with soft, bellowslike folds of finely tanned and dyed pigskin. Eight thin black ribbons are laced from sheet to sheet. The two elements seem like two states of the same thing. In one the metal sheets are spaced evenly to create an ungainly object, whose dark green pigskin draws us in while its spiky metal curlicues keep us at bay. In the second, the metal plates open widely away from the center, exposing a pink leather interior, something like the soft belly of a splayed creature, its pleated, generative core.

Dangerous Fragility bracketed Wandering about in the future, looking forward in the past, a large-scale and ambitious work de Monchaux conceived for the gallery’s main wall. She Sheetrocked the wall’s central window and covered the two remaining windows with identical grids of translucent painted glass panes. The panes are held in place visually by four vertical and four horizontal stripes of black ribbon. The ribbons pass variously through 16 buckles in front of each glass grid while another 16 buckles attach them to the wall.

Exactly in between the glass grids, de Monchaux affixed a narrow element which extended from floor to ceiling, suggesting a giant soft slit in the wall. Made from thin sheet-metal plates and pink pigskin that is folded labia-like, it is cinched to the wall—at eight points on both sides—by pairs of ribbons, with four more ribbon pairs radiating from both top and bottom. The pigskin puckers into numerous tiny folds where the ribbons attach. All the ribbons pass through wall-mounted buckles and end in neatly tied bows. Though the 88 buckles differ in shape, each comprises three machine-cut components, in steel, brass and white-enameled brass. There are numerous echoes from part to part and part to whole and myriad axes of symmetry. Wandering … is more graphic than three-dimensional; de Monchaux uses the wall as a blank page for her binding gestures, which take on a ritualistic character.

Non-representational sculpture is rarely sexy. But de Monchaux’s abstract works are formally tight and bristling with eroticism, as though Richard Deacon had crossed paths with Kathy Acker.