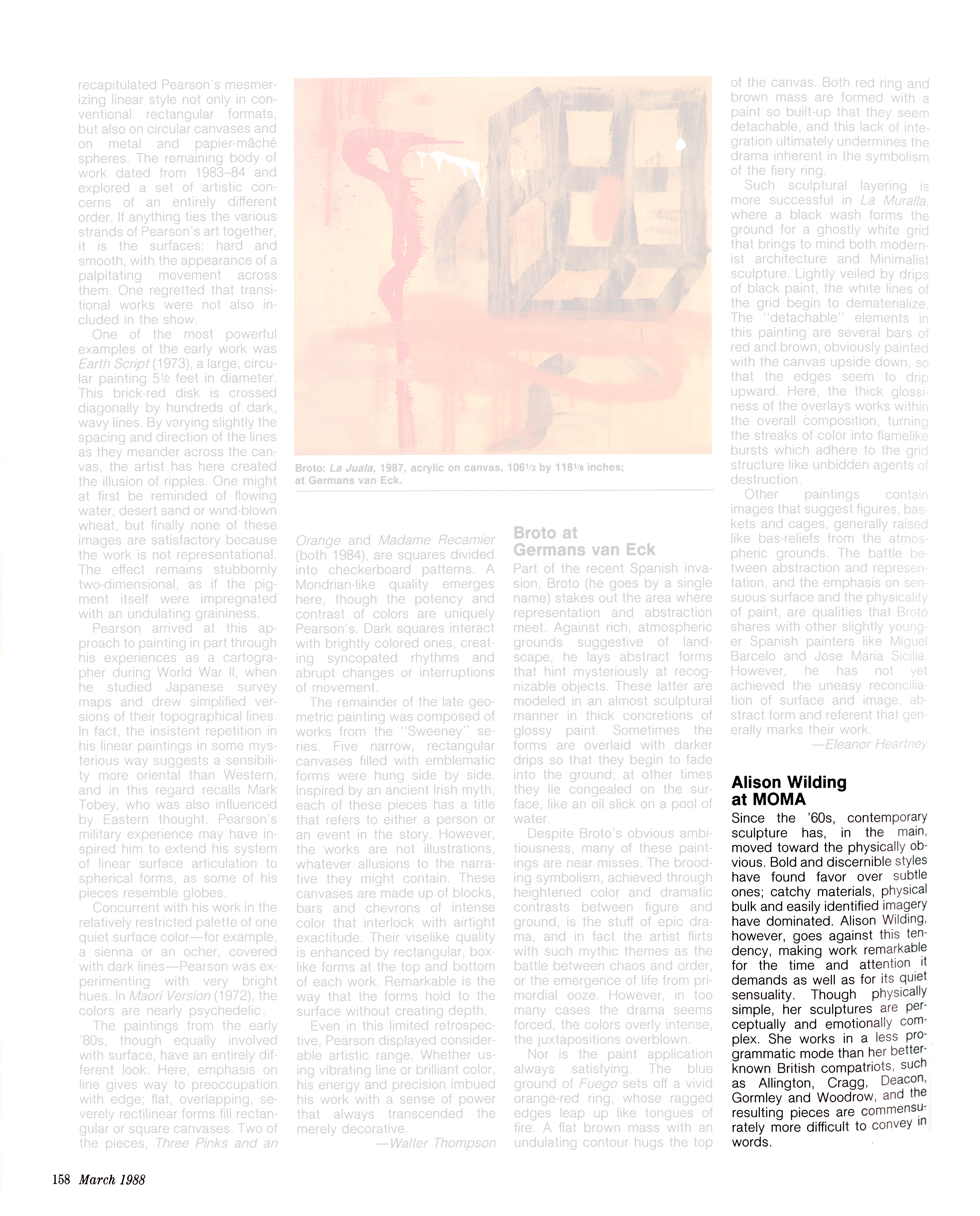 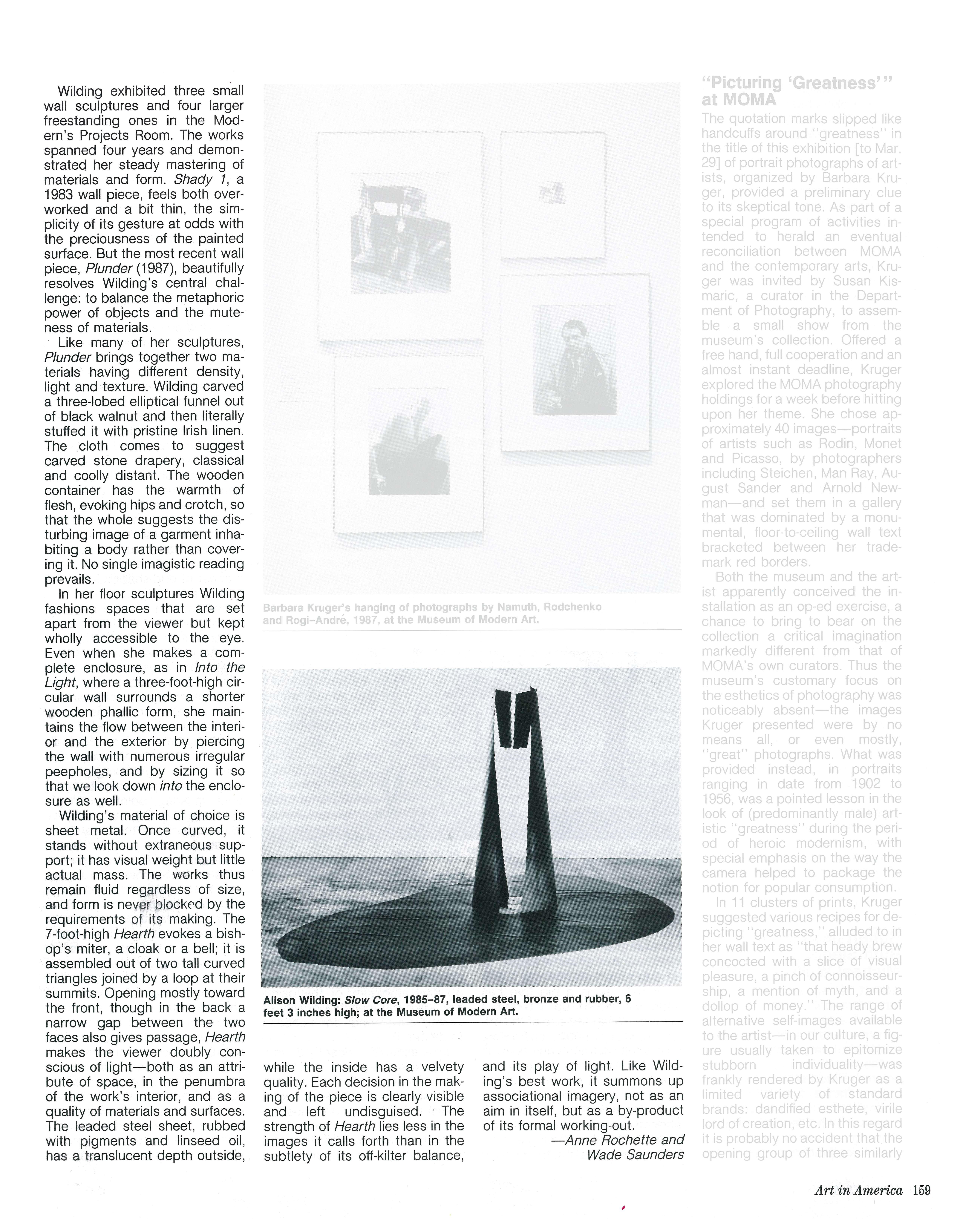 Since the ’60s, contemporary sculpture has, in the main, moved toward the physically obvious. Bold and discernible styles have found favor over subtle ones; catchy materials, physical bulk and easily identified imagery have dominated. Alison Wilding, however, goes against this tendency, making work remarkable for the time and attention it demands as well as for its quiet sensuality. Though physically simple, her sculptures are perceptually and emotionally complex. She works in a less programmatic mode than her better-known British compatriots, such as Allington, Cragg, Deacon, Gormley and Woodrow, and the resulting pieces are commensurately more difficult to convey in words.

Wilding exhibited three small wall sculptures and four larger freestanding ones in the Modern’s Projects Room. The works spanned four years and demonstrated her steady mastering of materials and form. Shady 1, a 1983 wall piece, feels both overworked and a bit thin, the simplicity of its gesture at odds with the preciousness of the painted surface. But the most recent wall piece, Plunder (1987), beautifully resolves Wilding’s central challenge: to balance the metaphoric power of objects and the muteness of materials.

Like many of her sculptures, Plunder brings together two materials having different density, light and texture. Wilding carved a three-lobed elliptical funnel out of black walnut and then literally stuffed it with pristine Irish linen. The cloth comes to suggest carved stone drapery, classical and coolly distant. The wooden container has the warmth of flesh, evoking hips and crotch, so that the whole suggests the disturbing image of a garment inhabiting a body rather than covering it. No single imagistic reading prevails.

In her floor sculptures Wilding fashions spaces that are set apart from the viewer but kept wholly accessible to the eye. Even when she makes a complete enclosure, as in Into the Light, where a three-foot-high circular wall surrounds a shorter wooden phallic form, she maintains the flow between the interior and the exterior by piercing the wall with numerous irregular peepholes, and by sizing it so that we look down into the enclosure as well.

Wilding’s material of choice is sheet metal. Once curved, it stands without extraneous support; it has visual weight but little actual mass. The works thus remain fluid regardless of size, and form is never blocked by the requirements of its making. The 7-foot-high Hearth evokes a bishop’s miter, a cloak or a bell; it is assembled out of two tall curved triangles joined by a loop at their summits. Opening mostly toward the front, though in the back a narrow gap between the two faces also gives passage, Hearth makes the viewer doubly conscious of light—both as an attribute of space, in the penumbra of the work’s interior, and as a quality of materials and surfaces. The thin steel sheet, rubbed with pigments and linseed oil, has a translucent depth outside, while the inside has a velvety quality. Each decision in the making of the piece is clearly visible and left undisguised. The strength of Hearth lies less in the images it calls forth than in the subtlety of its off-kilter balance, and its play of light. Like Wilding’s best work, it summons up associational imagery, not as an aim in itself, but as a by-product of its formal working-out.