Eric Bainbridge at Salvatore Ala 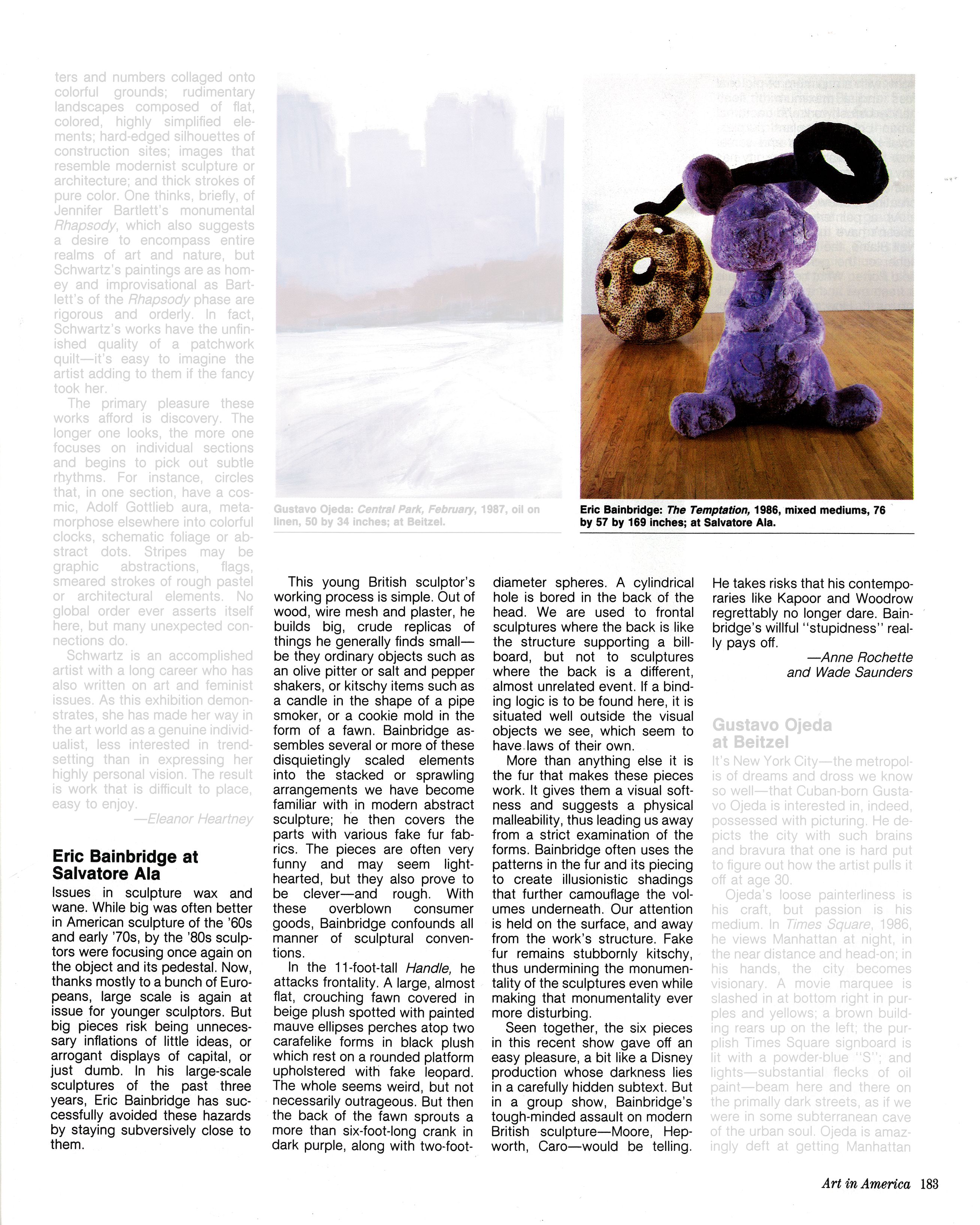 Issues in sculpture wax and wane. While big was often better in American sculpture of the ’60s and early ’70s, by the ’80s sculptors were focusing once again on the object and its pedestal. Now, thanks mostly to a bunch of Europeans, large scale is again at issue for younger sculptors. But big pieces risk being unnecessary inflations of little ideas, or arrogant displays of capital, or just dumb. In his large-scale sculptures of the past three years, Eric Bainbridge has successfully avoided these hazards by staying subversively close to them.

This young British sculptor’s working process is simple. Out of wood, wire mesh and plaster, he builds big, crude replicas of things he generally finds small— be they ordinary objects such as an olive pitter or salt and pepper shakers, or kitschy items such as a candle in the shape of a pipe smoker, or a cookie mold in the form of a fawn. Bainbridge assembles several or more of these disquietingly scaled elements into the stacked or sprawling arrangements we have become familiar with in modern abstract sculpture; he then covers the parts with various fake fur fabrics. The pieces are often very funny and may seem lighthearted, but they also prove to be clever—and rough. With these overblown consumer goods, Bainbridge confounds all manner of sculptural conventions.

In the 11-foot-tall Handle, he attacks frontality. A large, almost flat, crouching fawn covered in beige plush spotted with painted mauve ellipses perches atop two carafe like forms in black plush which rest on a rounded platform upholstered with fake leopard. The whole seems weird, but not necessarily outrageous. But then the back of the fawn sprouts a more than six-foot-long crank in dark purple, along with two-foot-diameter spheres. A cylindrical hole is bored in the back of the head. We are used to frontal sculptures where the back is like the structure supporting a billboard, but not to sculptures where the back is a different, almost unrelated event. If a binding logic is to be found here, it is situated well outside the visual objects we see, which seem to have laws of their own.

More than anything else it is the fur that makes these pieces work. It gives them a visual softness and suggests a physical malleability, thus leading us away from a strict examination of the forms. Bainbridge often uses the patterns in the fur and its piecing to create illusionistic shadings that further camouflage the volumes underneath. Our attention is held on the surface, and away from the work’s structure. Fake fur remains stubbornly kitschy, thus undermining the monumentality of the sculptures even while making that monumentality ever more disturbing.

Seen together, the six pieces in this recent show gave off an easy pleasure, a bit like a Disney production whose darkness lies in a carefully hidden subtext. But in a group show, Bainbridge’s tough-minded assault on modern British sculpture—Moore, Hepworth, Caro—would be telling. He takes risks that his contemporaries like Kapoor and Woodrow regrettably no longer dare. Bainbridge’s willful “stupidness” really pays off.