Michael Todd at the Oakland Museum 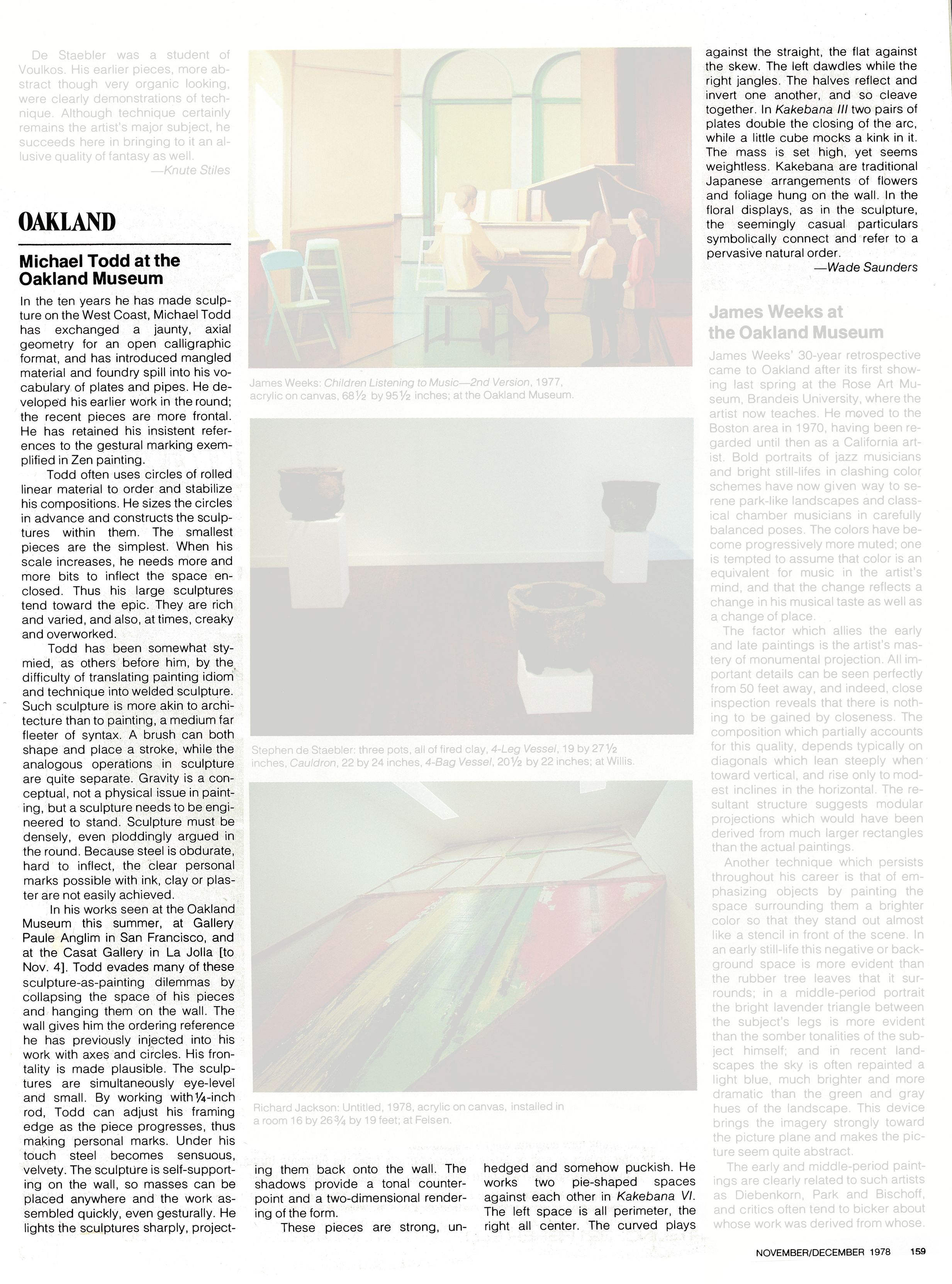 In the ten years he has made sculpture on the West Coast, Michael Todd has exchanged a jaunty, axial geometry for an open calligraphic format, and has introduced mangled material and foundry spill into his vocabulary of plates and pipes. He developed his earlier work in the round; the recent pieces are more frontal. He has retained his insistent references to the gestural marking exemplified in Zen painting.

Todd often uses circles of rolled linear material to order and stabilize his compositions. He sizes the circles in advance and constructs the sculptures within them. The smallest pieces are the simplest. When his scale increases, he needs more and more bits to inflect the space enclosed. Thus his large sculptures tend toward the epic. They are rich and varied, and also, at times, creaky and overworked.

Todd has been somewhat stymied, as others before him, by the difficulty of translating painting idiom and technique into welded sculpture. Such sculpture is more akin to architecture than to painting, a medium far fleeter of syntax. A brush can both shape and place a stroke, while the analogous operations in sculpture are quite separate. Gravity is a conceptual, not a physical issue in painting, but a sculpture needs to be engineered to stand. Sculpture must be densely, even ploddingly argued in the round. Because steel is obdurate, hard to inflect, the clear personal marks possible with ink, clay or plaster are not easily achieved.

In his works seen at the Oakland Museum this summer, at Gallery Paule Anglim in San Francisco, and at the Casat Gallery in La Jolla [to Nov. 4]. Todd evades many of these sculpture-as-painting dilemmas by collapsing the space of his pieces and hanging them on the wall. The wall gives him the ordering reference he has previously injected into his work with axes and circles. His frontality is made plausible. The sculptures are simultaneously eye-level and small. By working with 1/4-inch rod, Todd can adjust his framing edge as the piece progresses, thus making personal marks. Under his touch steel becomes sensuous, velvety. The sculpture is self-supporting on the wall, so masses can be placed anywhere and the work assembled quickly, even gesturally. He lights the sculptures sharply, projecting them back onto the wall. The shadows provide a tonal counterpoint and a two-dimensional rendering of the form.

These pieces are strong, unhedged and somehow puckish. He works two pie-shaped spaces against each other in Kakebana VI. The left space is all perimeter, the right all center. The curved plays against the straight, the flat against the skew. The left dawdles while the right jangles The halves reflect and invert one another, and so cleave together. In Kakebana III two pairs of plates double the closing of the arc, while a little cube mocks a kink in it. The mass is set high, yet seems weightless. Kakebana are traditional Japanese arrangements of flowers and foliage hung on the wall, in the floral displays, as in the sculpture, the seemingly casual particulars symbolically connect and refer to a pervasive natural order.