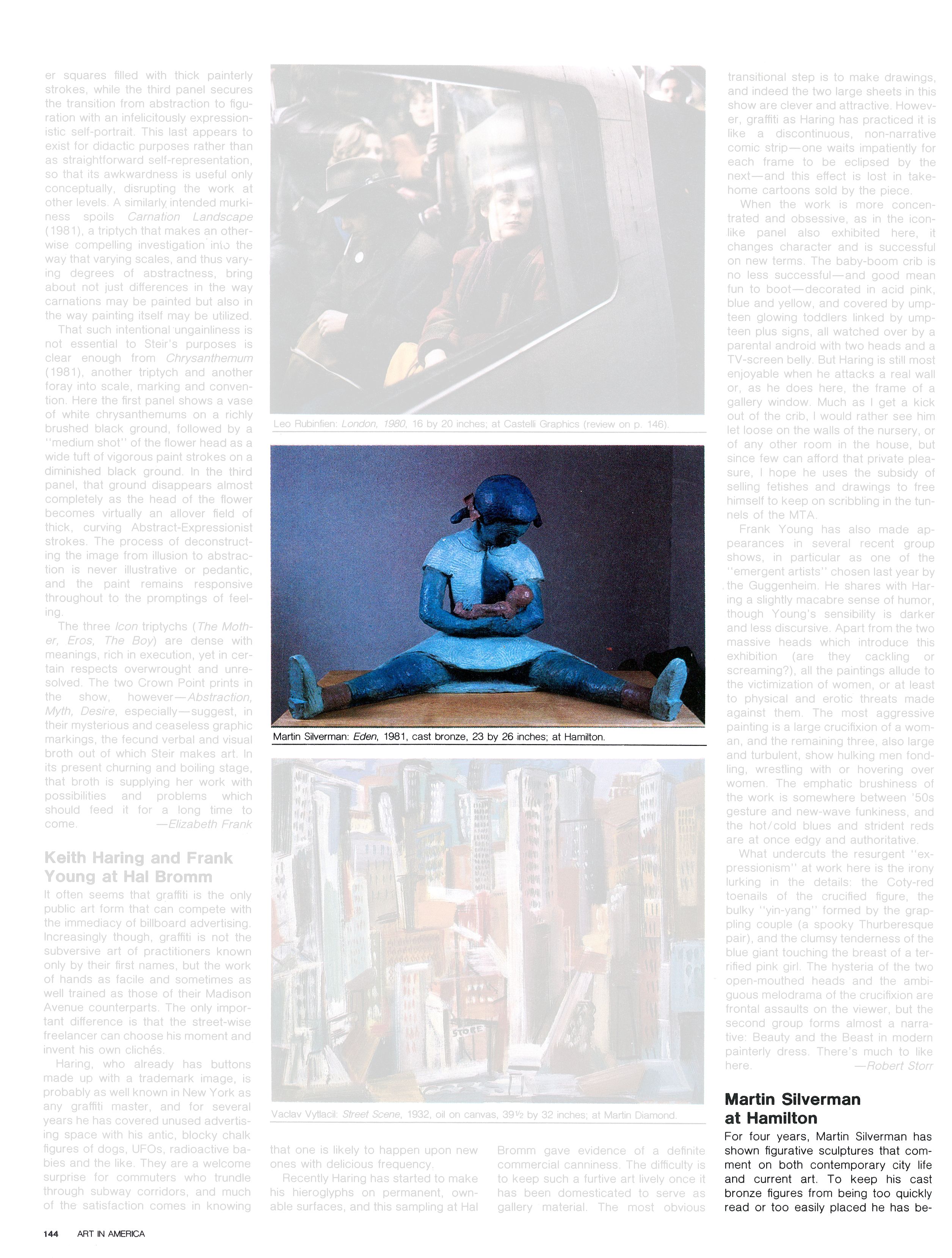 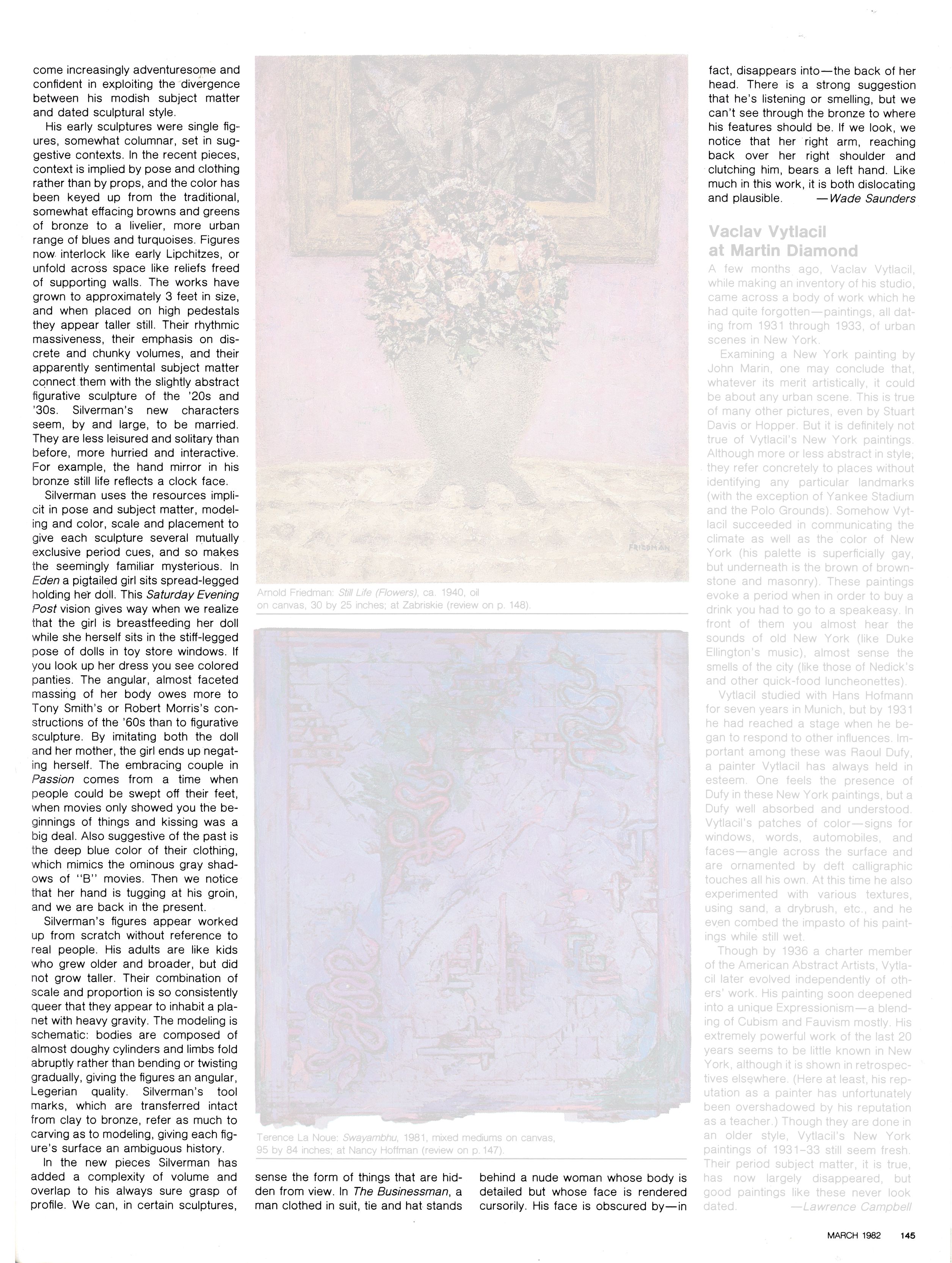 For four years, Martin Silverman has shown figurative sculptures that comment on both contemporary city life and current art. To keep his cast bronze figures from being too quickly read or too easily placed he has become increasingly adventuresome and confident in exploiting the divergence between his modish subject matter and dated sculptural style.

His early sculptures were single figures, somewhat columnar, set in suggestive contexts. In the recent pieces, context is implied by pose and clothing rather than by props, and the color has been keyed up from the traditional, somewhat effacing browns and greens of bronze to a livelier, more urban range of blues and turquoises. Figures now interlock like early Lipchitzes, or unfold across space like reliefs freed of supporting walls. The works have grown to approximately 3 feet in size, and when placed on high pedestals they appear taller still. Their rhythmic massiveness, their emphasis on discrete and chunky volumes, and their apparently sentimental subject matter connect them with the slightly abstract figurative sculpture of the ’20s and ’30s. Silverman’s new characters seem, by and large, to be married. They are less leisured and solitary than before, more hurried and interactive. For example, the hand mirror in his bronze still life reflects a clock face.

Silverman uses the resources implicit in pose and subject matter, modeling and color, scale and placement to give each sculpture several mutually exclusive period cues, and so makes the seemingly familiar mysterious. In Eden a pigtailed girl sits spread-legged holding her doll. This Saturday Evening Post vision gives way when we realize that the girl is breastfeeding her doll while she herself sits in the stiff-legged pose of dolls in toy store windows. If you look up her dress you see colored panties. The angular, almost faceted massing of her body owes more to Tony Smith’s or Robert Morris’s constructions of the ’60s than to figurative sculpture. By imitating both the doll and her mother, the girl ends up negating herself. The embracing couple in Passion comes from a time when people could be swept off their feet, when movies only showed you the beginnings of things and kissing was a big deal Also suggestive of the past is the deep blue color of their clothing, which mimics the ominous gray shadows of “B” movies. Then we notice that her hand is tugging at his groin, and we are back in the present.

Silverman’s figures appear worked up from scratch without reference to real people. His adults are like kids who grew older and broader, but did not grow taller. Their combination of scale and proportion is so consistently queer that they appear to inhabit a planet with heavy gravity. The modeling is schematic: bodies are composed of almost doughy cylinders and limbs fold abruptly rather than bending or twisting gradually, giving the figures an angular, Legerian quality. Silverman’s tool marks, which are transferred intact from clay to bronze, refer as much to carving as to modeling, giving each figure’s surface an ambiguous history.

In the new pieces Silverman has added a complexity of volume and overlap to his always sure grasp of profile We can, in certain sculptures, sense the form of things that are hidden from view. In The Businessman, a man clothed in suit, tie and hat stands behind a nude woman whose body is detailed but whose face is rendered cursorily. His face is obscured by—in fact, disappears into—the back of her head. There is a strong suggestion that he’s listening or smelling, but we can’t see through the bronze to where his features should be. If we look, we notice that her right arm. reaching back over her right shoulder and clutching him, bears a left hand. Like much in this work, it is both dislocating and plausible.