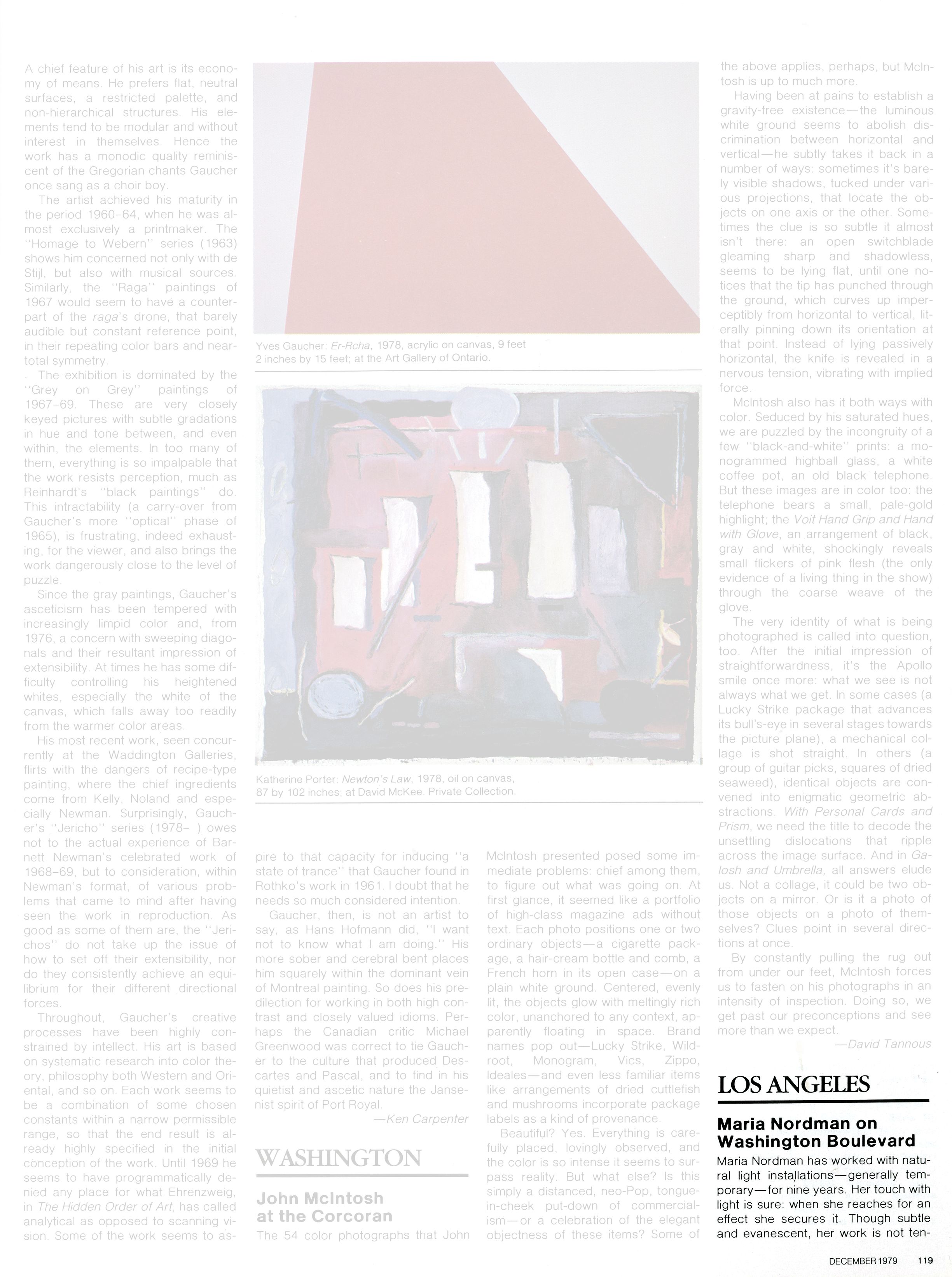 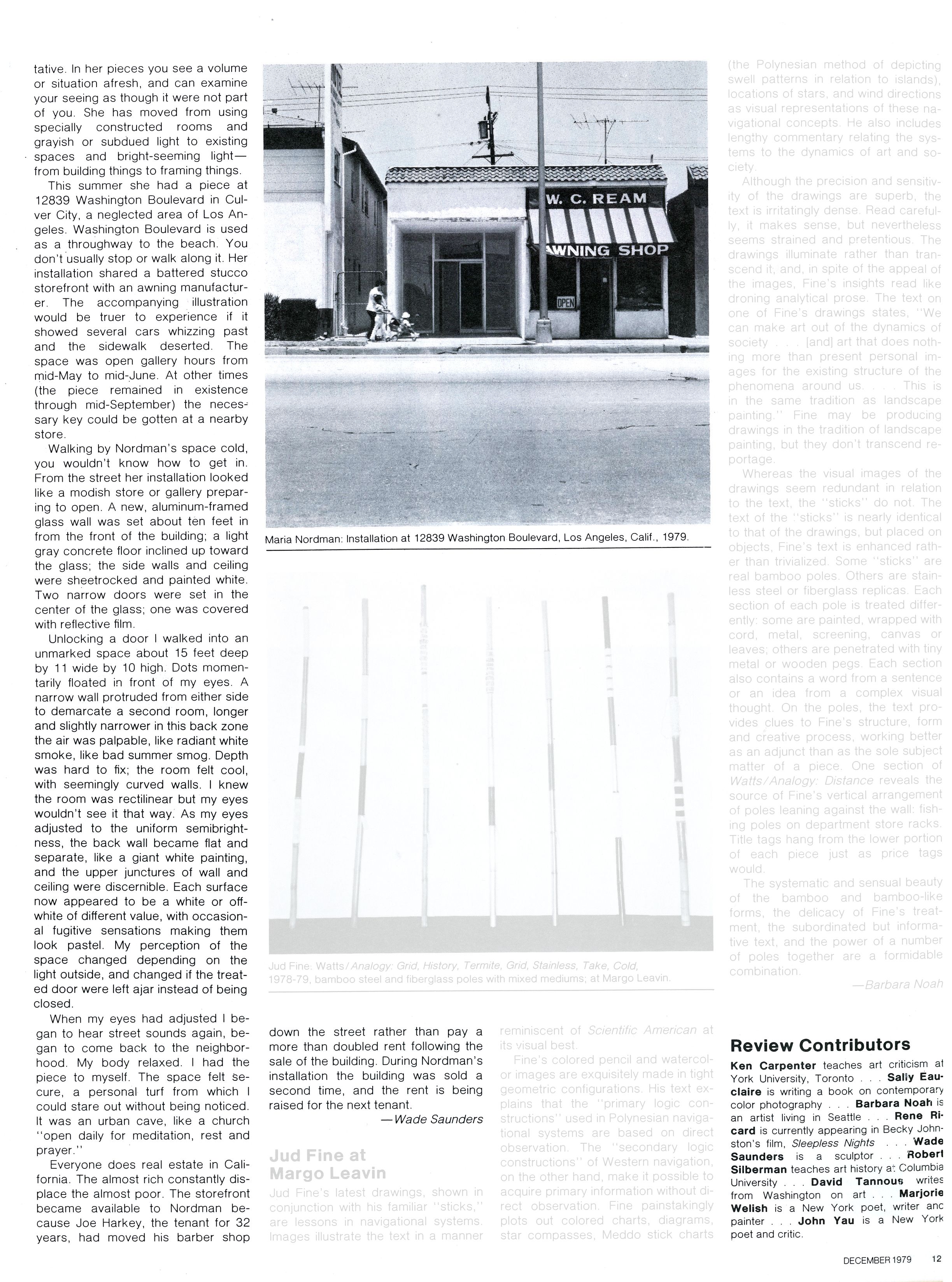 Maria Nordman has worked with natural light installations—generally temporary—for nine years. Her touch with light is sure: when she reaches for an effect she secures it. Though subtle and evanescent, her work is not tentative. In her pieces you see a volume or situation afresh, and can examine your seeing as though it were not part of you. She has moved from using specially constructed rooms and grayish or subdued light to existing spaces and bright-seeming light—from building things to framing things.

This summer she had a piece at 12839 Washington Boulevard in Culver City, a neglected area of Los Angeles. Washington Boulevard is used as a throughway to the beach. You don’t usually stop or walk along it. Her installation shared a battered stucco storefront with an awning manufacturer. The accompanying illustration would be truer to experience if it showed several cars whizzing past and the sidewalk deserted. The space was open gallery hours from mid-May to mid-June. At other times (the piece remained in existence through mid-September) the necessary key could be gotten at a nearby store.

Walking by Nordman’s space cold, you wouldn’t know how to get in. From the street her installation looked like a modish store or gallery preparing to open. A new, aluminum-framed glass wall was set about ten feet in from the front of the building; a light gray concrete floor inclined up toward the glass; the side walls and ceiling were sheetrocked and painted white. Two narrow doors were set in the center of the glass; one was covered with reflective film.

Unlocking a door I walked into an unmarked space about 15 feet deep by 11 wide by 10 high. Dots momentarily floated in front of my eyes. A narrow wall protruded from either side to demarcate a second room, longer and slightly narrower. In this back zone the air was palpable, like radiant white smoke, like bad summer smog. Depth was hard to fix; the room felt cool, with seemingly curved walls. I knew the room was rectilinear but my eyes wouldn’t see it that way. As my eyes adjusted to the uniform semibrightness, the back wall became flat and separate, like a giant white painting, and the upper junctures of wall and ceiling were discernible. Each surface now appeared to be a white or off- white of different value, with occasional fugitive sensations making them look pastel. My perception of the space changed depending on the light outside, and changed if the treated door were left ajar instead of being closed.

When my eyes had adjusted I began to hear street sounds again, began to come back to the neighborhood. My body relaxed I had the piece to myself. The space felt secure, a personal turf from which I could stare out without being noticed. It was an urban cave, like a church “open daily for meditation, rest and prayer.”

Everyone does real estate in California. The almost rich constantly displace the almost poor. The storefront became available to Nordman because Joe Harkey, the tenant for 32 years, had moved his barber shop down the street rather than pay a more than doubled rent following the sale of the building. During Nordman’s installation the building was sold a second time, and the rent is being raised for the next tenant.