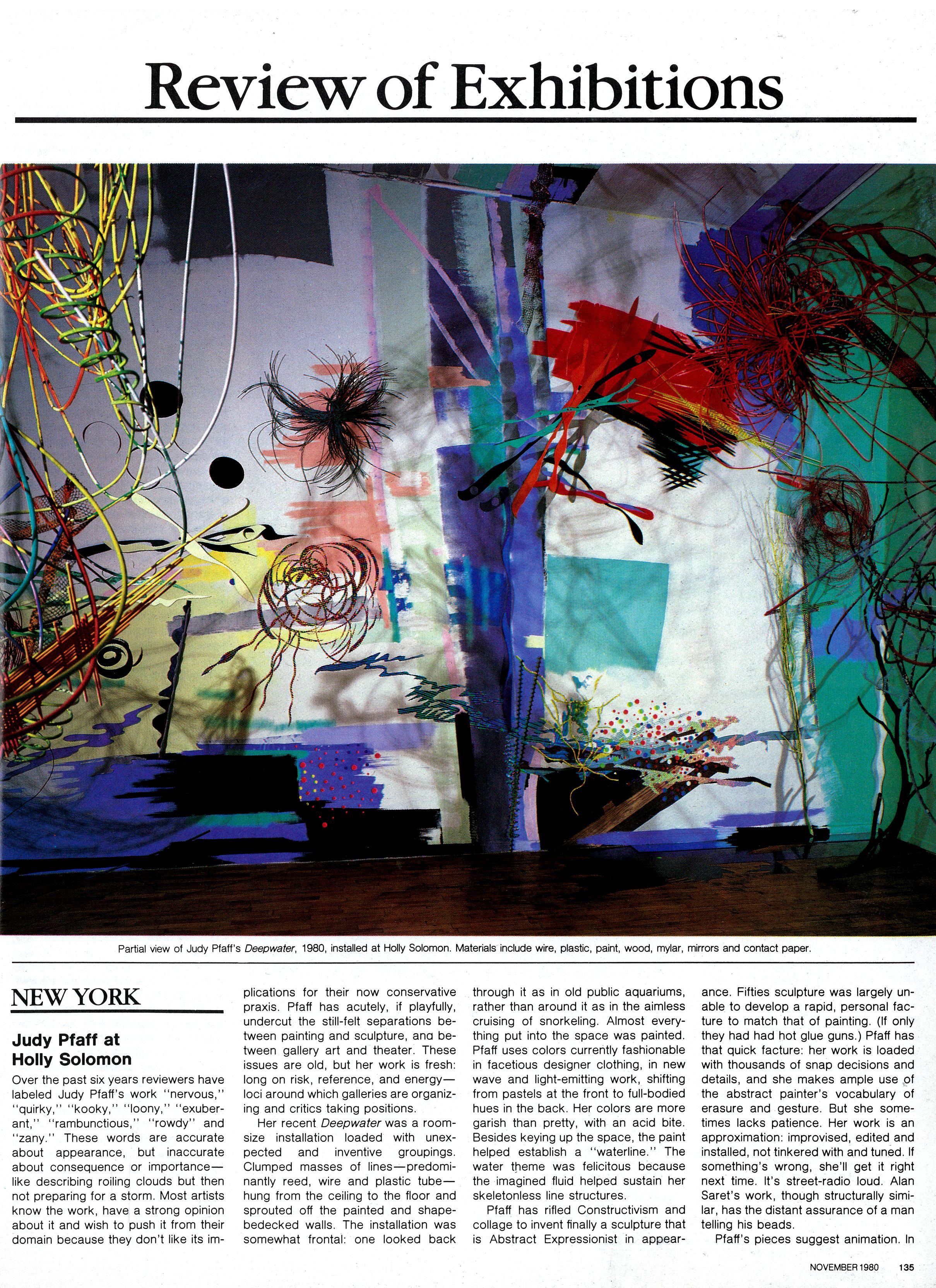 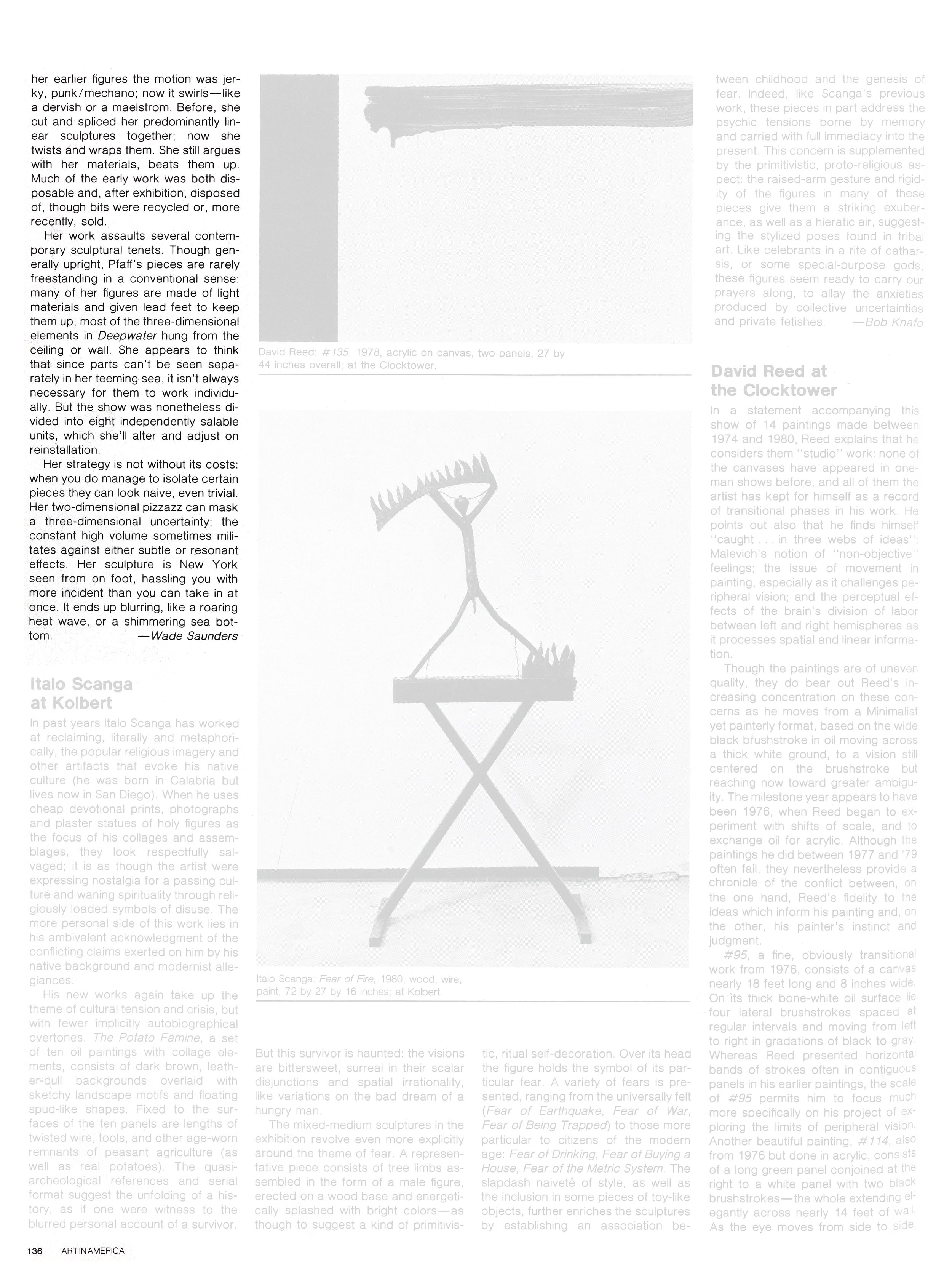 Over the past six years reviewers have labeled Judy Pfaff’s work “nervous,” “quirky,” “kooky,” “loony,” “exuberant,” “rambunctious,” “rowdy” and “zany.” These words are accurate about appearance, but inaccurate about consequence or importance—like describing roiling clouds but then not preparing for a storm. Most artists know the work, have a strong opinion about it and wish to push it from their domain because they don’t like its implications for their now conservative praxis. Pfaff has acutely, if playfully, undercut the still-felt separations between painting and sculpture, and between gallery art and theater. These issues are old, but her work is fresh: long on risk, reference, and energy—loci around which galleries are organizing and critics taking positions.

Her recent Deepwater was a room- size installation loaded with unexpected and inventive groupings. Clumped masses of lines—predominantly reed, wire and plastic tube—hung from the ceiling to the floor and sprouted off the painted and shape- bedecked walls. The installation was somewhat frontal: one looked back

through it as in old public aquariums, rather than around it as in the aimless cruising of snorkeling. Almost everything put into the space was painted. Pfaff uses colors currently fashionable in facetious designer clothing, in new wave and light-emitting work, shifting from pastels at the front to full-bodied hues in the back. Her colors are more garish than pretty, with an acid bite. Besides keying up the space, the paint helped establish a “waterline.” The water theme was felicitous because the imagined fluid helped sustain her skeletonless line structures.

Pfaff has rifled Constructivism and collage to invent finally a sculpture that is Abstract Expressionist in appearance. Fifties sculpture was largely unable to develop a rapid, personal facture to match that of painting. (If only they had had hot glue guns.) Pfaff has that quick facture: her work is loaded with thousands of snap decisions and details, and she makes ample use of the abstract painter’s vocabulary of erasure and gesture. But she sometimes lacks patience. Her work is an approximation: improvised, edited and installed, not tinkered with and tuned. If something’s wrong, she’ll get it right next time. It’s street-radio loud. Alan Saret’s work, though structurally similar, has the distant assurance of a man telling his beads.

Pfaff’s pieces suggest animation. In her earlier figures the motion was jerky, punk/mechano; now it swirls—like a dervish or a maelstrom. Before, she cut and spliced her predominantly linear sculptures together; now she twists and wraps them. She still argues with her materials, beats them up. Much of the early work was both disposable and, after exhibition, disposed of, though bits were recycled or, more recently, sold.

Her work assaults several contemporary sculptural tenets. Though generally upright, Pfaff’s pieces are rarely freestanding in a conventional sense: many of her figures are made of light materials and given lead feet to keep them up; most of the three-dimensional elements in Deepwater hung from the ceiling or wall. She appears to think that since parts can’t be seen separately in her teeming sea, it isn’t always necessary for them to work individually. But the show was nonetheless divided into eight independently salable units, which she’ll alter and adjust on reinstallation.

Her strategy is not without its costs: when you do manage to isolate certain pieces they can look naive, even trivial. Her two-dimensional pizzazz can mask a three-dimensional uncertainty; the constant high volume sometimes militates against either subtle or resonant effects. Her sculpture is New York seen from on foot, hassling you with more incident than you can take in at once. It ends up blurring, like a roaring heat wave, or a shimmering sea bottom.