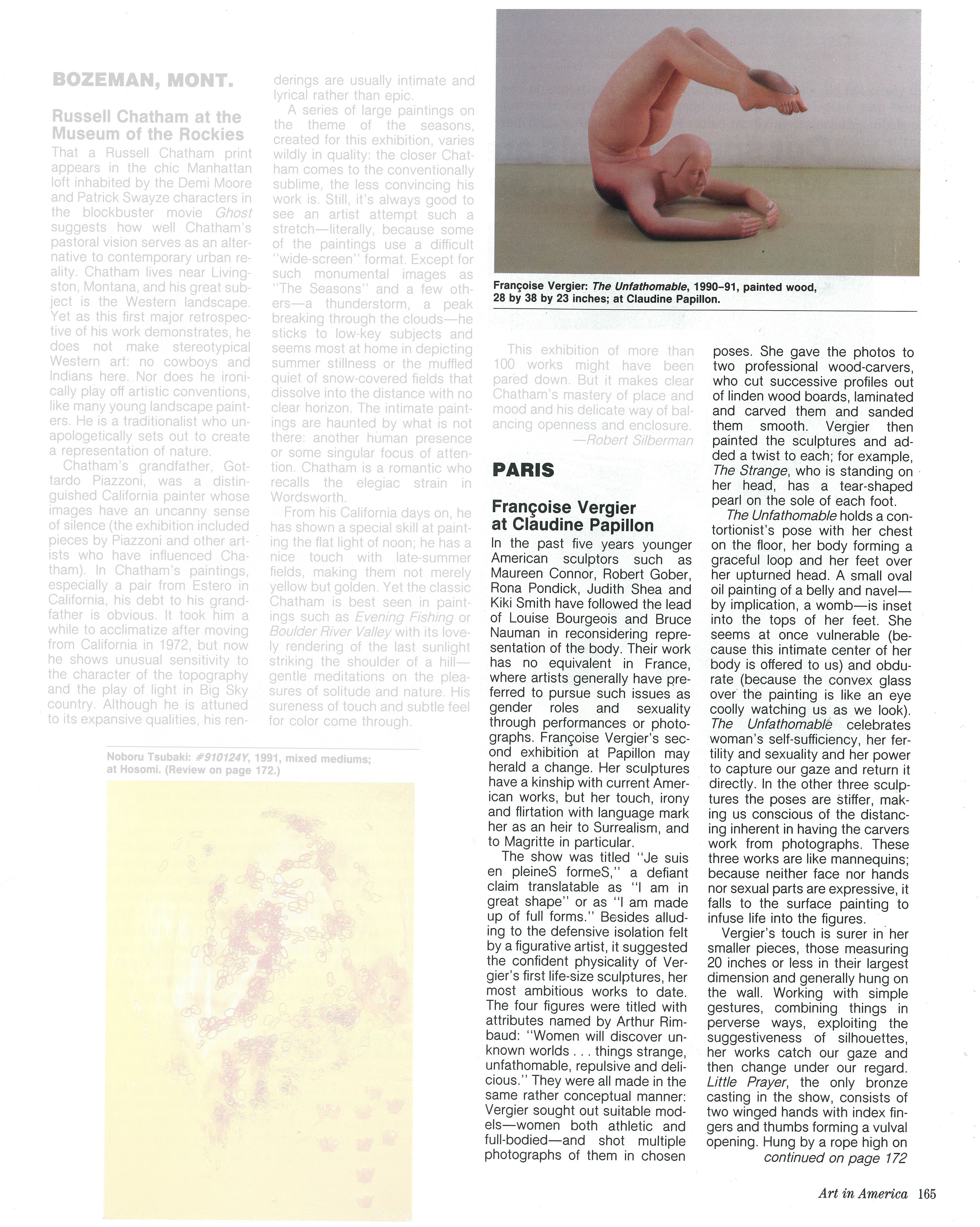 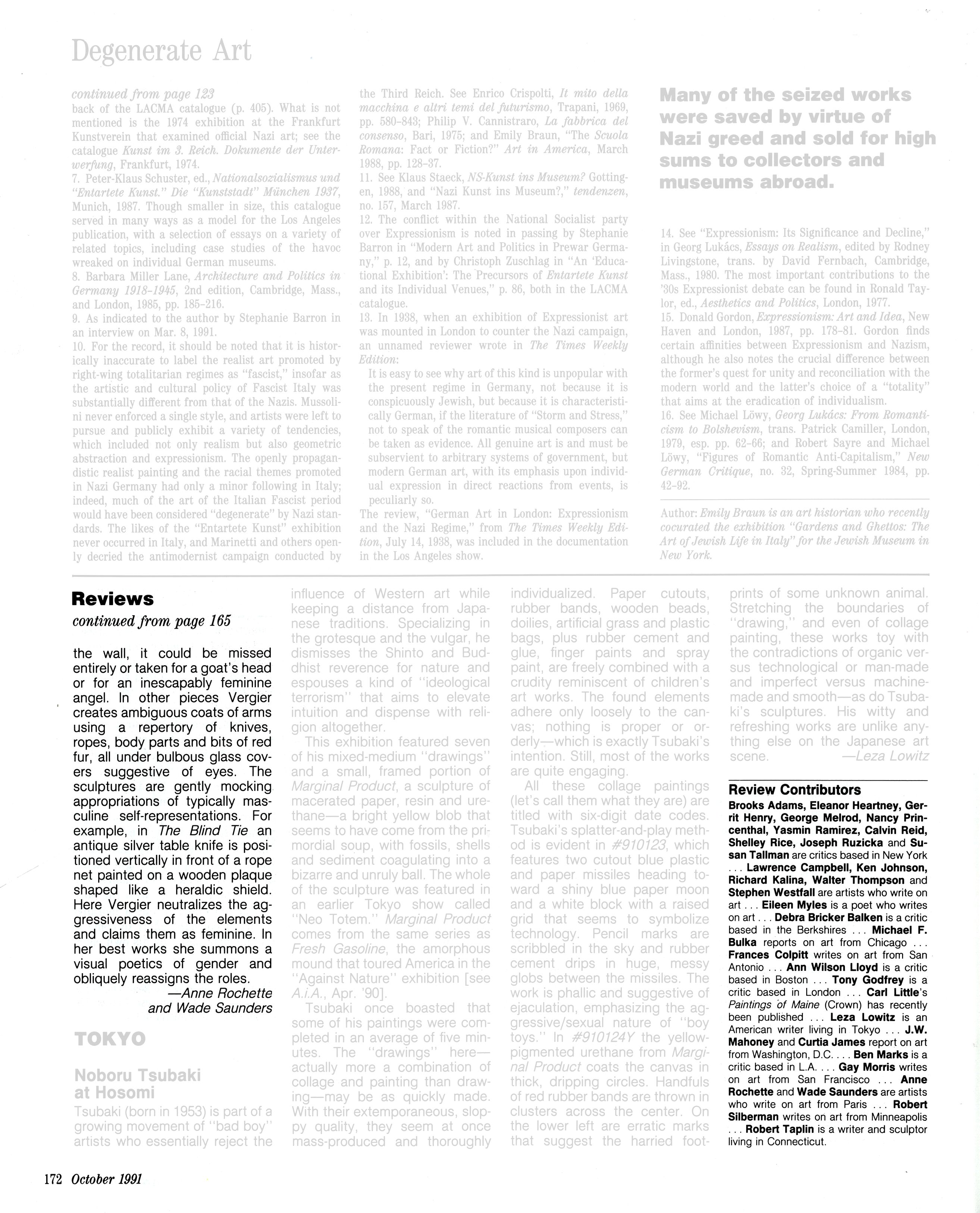 In the past five years younger American sculptors such as Maureen Connor, Robert Gober, Rona Pondick, Judith Shea and Kiki Smith have followed the lead of Louise Bourgeois and Bruce Nauman in reconsidering representation of the body. Their work has no equivalent in France, where artists generally have preferred to pursue such issues as gender roles and sexuality through performances or photographs. Françoise Vergier’s second exhibition at Papillon may herald a change. Her sculptures have a kinship with current American works, but her touch, irony and flirtation with language mark her as an heir to Surrealism, and to Magritte in particular.

The show was titled “Je suis en pleineS formeS,” a defiant claim translatable as “I am in great shape” or as “I am made up of full forms.” Besides alluding to the defensive isolation felt by a figurative artist, it suggested the confident physicality of Vergier’s first life-size sculptures, her most ambitious works to date. The four figures were titled with attributes named by Arthur Rimbaud: “Women will discover unknown worlds . . . things strange, unfathomable, repulsive and delicious.” They were all made in the same rather conceptual manner: Vergier sought out suitable models—women both athletic and full-bodied—and shot multiple photographs of them in chosen poses. She gave the photos to two professional wood-carvers, who cut successive profiles out of linden wood boards, laminated and carved them and sanded them smooth. Vergier then painted the sculptures and added a twist to each; for example, The Strange, who is standing on her head, has a tear-shaped pearl on the sole of each foot.

The Unfathomable holds a contortionist’s pose with her chest on the floor, her body forming a graceful loop and her feet over her upturned head. A small oval oil painting of a belly and navel— by implication, a womb—is inset into the tops of her feet. She seems at once vulnerable (because this intimate center of her body is offered to us) and obdurate (because the convex glass over the painting is like an eye coolly watching us as we look). The Unfathomable celebrates woman’s self-sufficiency, her fertility and sexuality and her power to capture our gaze and return it directly. In the other three sculptures the poses are stiffer, making us conscious of the distancing inherent in having the carvers work from photographs. These three works are like mannequins; because neither face nor hands nor sexual parts are expressive, it falls to the surface painting to infuse life into the figures.

Vergier’s touch is surer in her smaller pieces, those measuring 20 inches or less in their largest dimension and generally hung on the wall. Working with simple gestures, combining things in perverse ways, exploiting the suggestiveness of silhouettes, her works catch our gaze and then change under our regard. Little Prayer, the only bronze casting in the show, consists of two winged hands with index fingers and thumbs forming a vulval opening. Hung by a rope high on the wall, it could be missed entirely or taken for a goat’s head or for an inescapably feminine angel. In other pieces Vergier creates ambiguous coats of arms using a repertory of knives, ropes, body parts and bits of red fur, all under bulbous glass covers suggestive of eyes. The sculptures are gently mocking appropriations of typically masculine self-representations. For example, in The Blind Tie an antique silver table knife is positioned vertically in front of a rope net painted on a wooden plaque shaped like a heraldic shield. Here Vergier neutralizes the aggressiveness of the elements and claims them as feminine. In her best works she summons a visual poetics of gender and obliquely reassigns the roles.