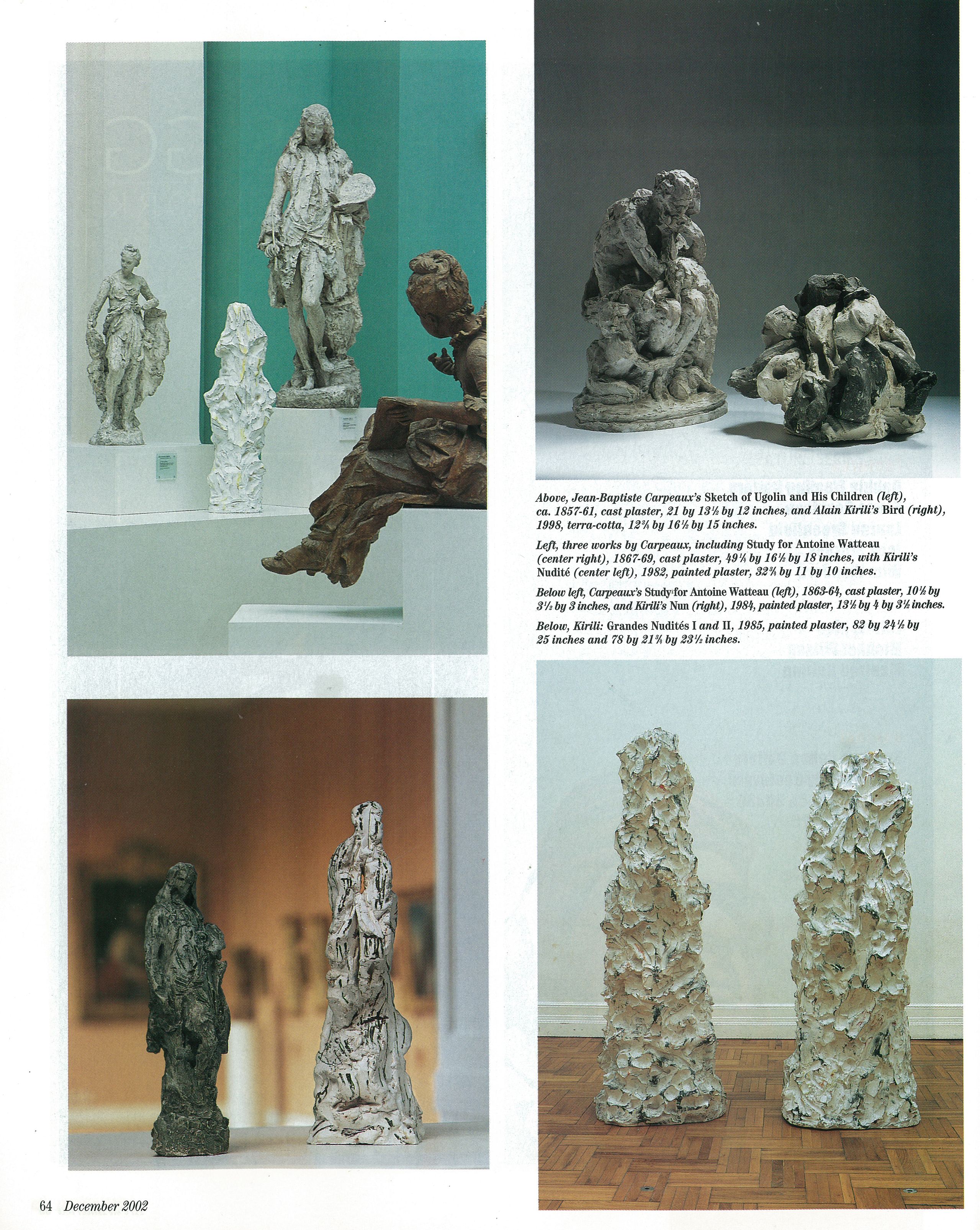 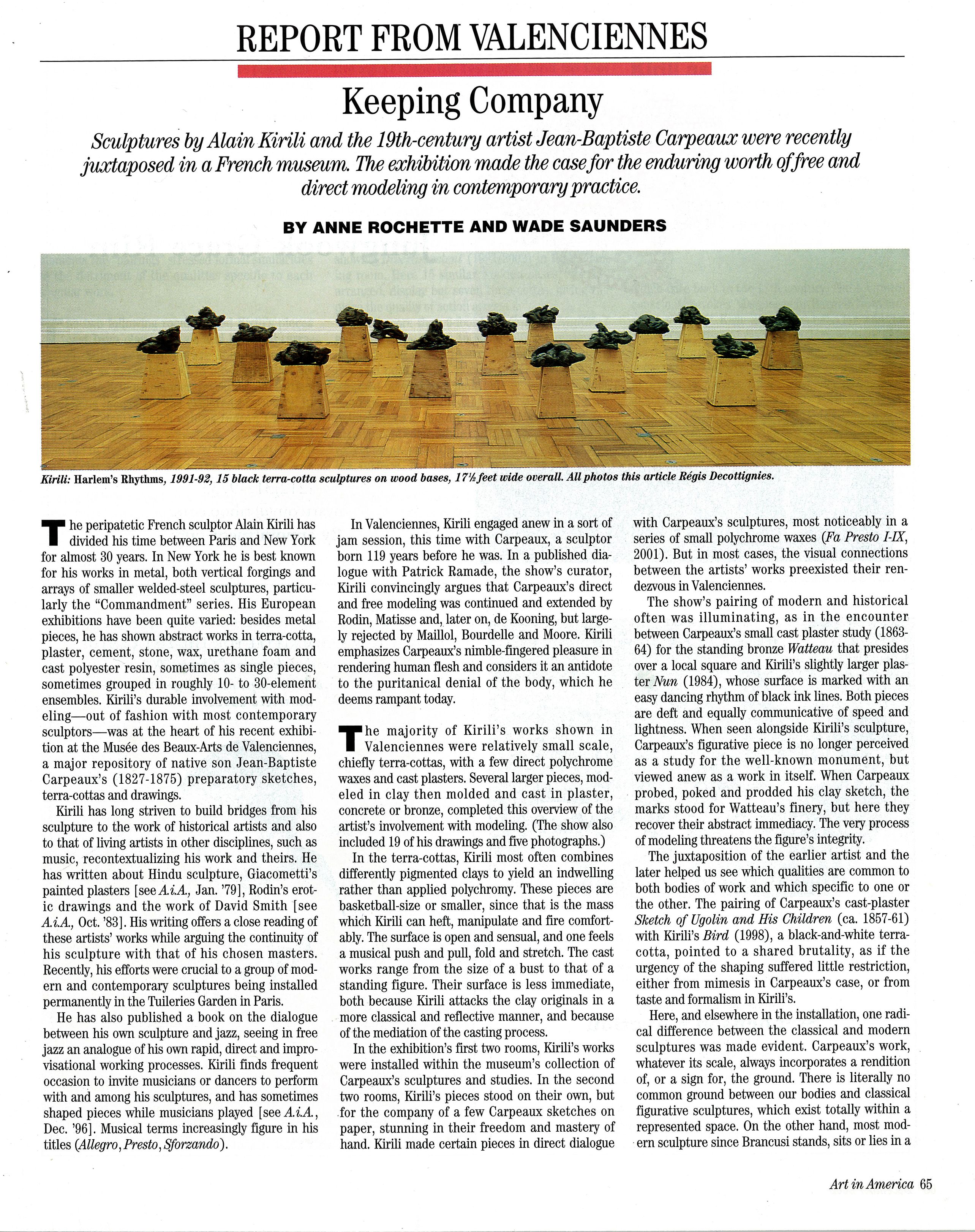 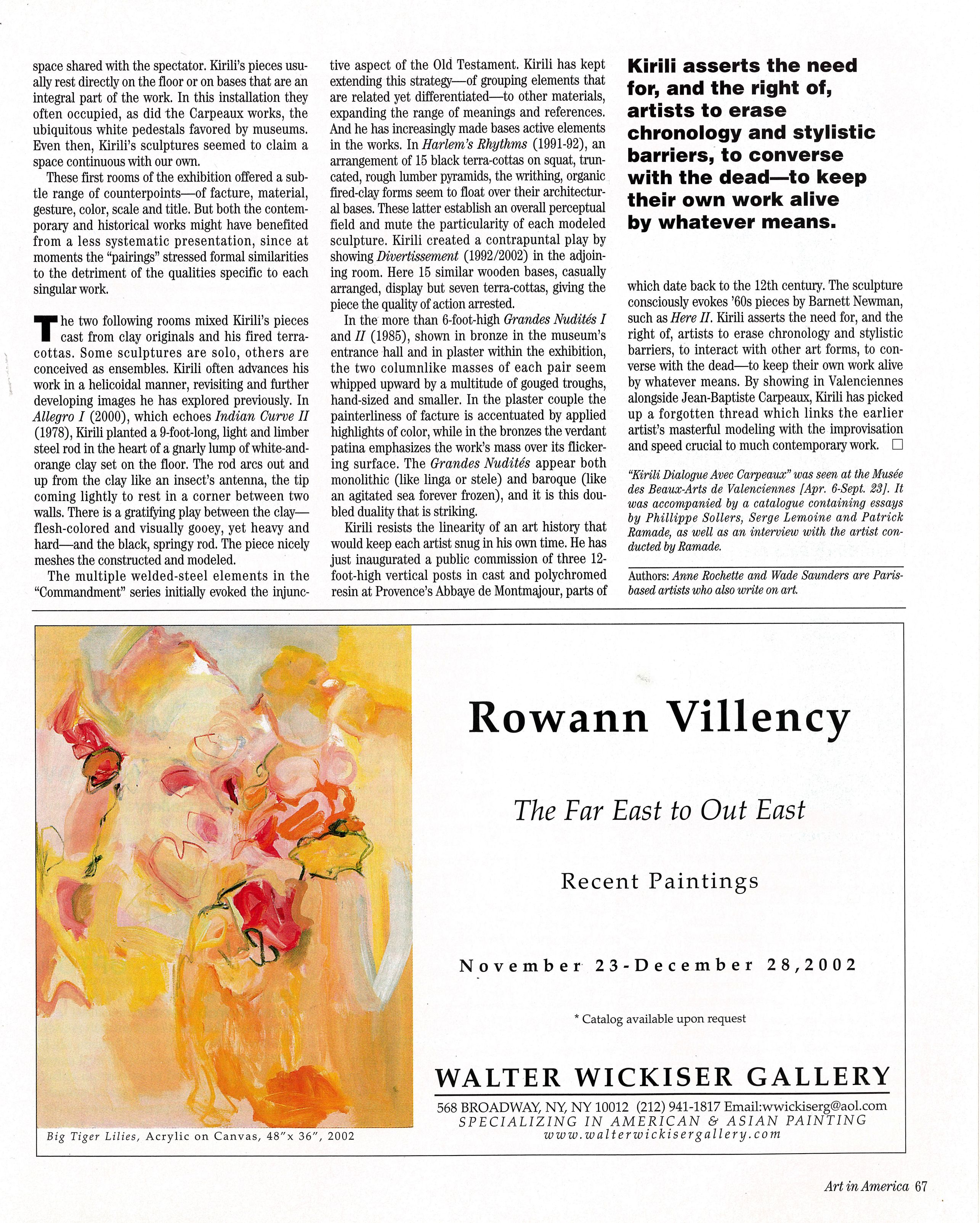 The peripatetic French sculptor Alain Kirili has divided his time between Paris and New York for almost 30 years. In New York he is best known for his works in metal, both vertical forgings and arrays of smaller welded-steel sculptures, particularly the “Commandment” series. His European exhibitions have been quite varied: besides metal pieces, he has shown abstract works in terra-cotta, plaster, cement, stone, wax, urethane foam and cast polyester resin, sometimes as single pieces, sometimes grouped in roughly 10- to 30-element ensembles. Kirili’s durable involvement with modeling—out of fashion with most contemporary sculptors—was at the heart of his recent exhibition at the Musée des Beaux-Arts de Valenciennes, a major repository of native son Jean-Baptiste Carpeaux’s (1827-1875) preparatory sketches, terra-cottas and drawings.

Kirili has long striven to build bridges from his sculpture to the work of historical artists and also to that of living artists in other disciplines, such as music, recontextualizing his work and theirs. He has written about Hindu sculpture, Giacometti’s painted plasters [see A.i.A., Jan. ’79], Rodin’s erotic drawings and the work of David Smith [see A.i.A., Oct. ’83]. His writing offers a close reading of these artists’ works while arguing the continuity of his sculpture with that of his chosen masters. Recently, his efforts were crucial to a group of modern and contemporary sculptures being installed permanently in the Tuileries Garden in Paris.

He has also published a book on the dialogue between his own sculpture and jazz, seeing in free jazz an analogue of his own rapid, direct and improvisational working processes. Kirili finds frequent occasion to invite musicians or dancers to perform with and among his sculptures, and has sometimes shaped pieces while musicians played [see A.i.A., Dec. ’96]. Musical terms increasingly figure in his titles (Allegro, Presto, Sforzando).

In Valenciennes, Kirili engaged anew in a sort of jam session, this time with Carpeaux, a sculptor born 119 years before he was. In a published dialogue with Patrick Ramade, the show’s curator, Kirili convincingly argues that Carpeaux’s direct and free modeling was continued and extended by Rodin, Matisse and, later on, de Kooning, but largely rejected by Maillol, Bourdelle and Moore. Kirili emphasizes Carpeaux’s nimble-fingered pleasure in rendering human flesh and considers it an antidote to the puritanical denial of the body, which he deems rampant today.

The majority of Kirili’s works shown in Valenciennes were relatively small scale, chiefly terra-cottas, with a few direct polychrome waxes and cast plasters. Several larger pieces, modeled in clay then molded and cast in plaster, concrete or bronze, completed this overview of the artist’s involvement with modeling. (The show also included 19 of his drawings and five photographs.)

In the terra-cottas, Kirili most often combines differently pigmented clays to yield an indwelling rather than applied polychromy. These pieces are basketball-size or smaller, since that is the mass which Kirili can heft, manipulate and fire comfortably. The surface is open and sensual, and one feels a musical push and pull, fold and stretch. The cast works range from the size of a bust to that of a standing figure. Their surface is less immediate, both because Kirili attacks the clay originals in a more classical and reflective manner, and because of the mediation of the casting process.

In the exhibition’s first two rooms, Kirili’s works were installed within the museum’s collection of Carpeaux’s sculptures and studies. In the second two rooms, Kirili’s pieces stood on their own, but for the company of a few Carpeaux sketches on paper, stunning in their freedom and mastery of hand. Kirili made certain pieces in direct dialogue with Carpeaux’s sculptures, most noticeably in a series of small polychrome waxes (Fa Presto I-IX, 2001). But in most cases, the visual connections between the artists’ works preexisted their rendezvous in Valenciennes.

The show’s pairing of modern and historical often was illuminating, as in the encounter between Carpeaux’s small cast plaster study (1863- 64) for the standing bronze Watteau that presides over a local square and Kirili’s slightly larger plaster Nun (1984), whose surface is marked with an easy dancing rhythm of black ink lines. Both pieces are deft and equally communicative of speed and lightness. When seen alongside Kirili’s sculpture, Carpeaux’s figurative piece is no longer perceived as a study for the well-known monument, but viewed anew as a work in itself. When Carpeaux probed, poked and prodded his clay sketch, the marks stood for Watteau’s finery, but here they recover their abstract immediacy. The very process of modeling threatens the figure’s integrity.

The juxtaposition of the earlier artist and the later helped us see which qualities are common to both bodies of work and which specific to one or the other. The pairing of Carpeaux’s cast-plaster Sketch of Ugolin and His Children (ca. 1857-61) with Kirili’s Bird (1998), a black-and-white terracotta, pointed to a shared brutality, as if the urgency of the shaping suffered little restriction, either from mimesis in Carpeaux’s case, or from taste and formalism in Kirili’s.

Here, and elsewhere in the installation, one radical difference between the classical and modern sculptures was made evident. Carpeaux’s work, whatever its scale, always incorporates a rendition of, or a sign for, the ground. There is literally no common ground between our bodies and classical figurative sculptures, which exist totally within a represented space. On the other hand, most modern sculpture since Brancusi stands, sits or lies in a space shared with the spectator. Kirili’s pieces usually rest directly on the floor or on bases that are an integral part of the work. In this installation they often occupied, as did the Carpeaux works, the ubiquitous white pedestals favored by museums. Even then, Kirili’s sculptures seemed to claim a space continuous with our own.

These first rooms of the exhibition offered a subtle range of counterpoints—of facture, material, gesture, color, scale and title. But both the contemporary and historical works might have benefited from a less systematic presentation, since at moments the “pairings” stressed formal similarities to the detriment of the qualities specific to each singular work.

The two following rooms mixed Kirili’s pieces cast from clay originals and his fired terracottas. Some sculptures are solo, others are conceived as ensembles. Kirili often advances his work in a helicoidal manner, revisiting and further developing images he has explored previously. In Allegro I (2000), which echoes Indian Curve II (1978), Kirili planted a 9-foot-long, light and limber steel rod in the heart of a gnarly lump of white-and-orange clay set on the floor. The rod arcs out and up from the clay like an insect’s antenna, the tip coming lightly to rest in a corner between two walls. There is a gratifying play between the clay— flesh-colored and visually gooey, yet heavy and hard—and the black, springy rod. The piece nicely meshes the constructed and modeled.

The multiple welded-steel elements in the “Commandment” series initially evoked the injunctive aspect of the Old Testament. Kirili has kept extending this strategy—of grouping elements that are related yet differentiated—to other materials, expanding the range of meanings and references. And he has increasingly made bases active elements in the works. In Harlem’s Rhythms (1991-92), an arrangement of 15 black terra-cottas on squat, truncated, rough lumber pyramids, the writhing, organic fired-clay forms seem to float over their architectural bases. These latter establish an overall perceptual field and mute the particularity of each modeled sculpture. Kirili created a contrapuntal play by showing Divertissement (1992/2002) in the adjoining room. Here 15 similar wooden bases, casually arranged, display but seven terra-cottas, giving the piece the quality of action arrested.

In the more than 6-foot-high Grandes Nudités I and II (1985), shown in bronze in the museum’s entrance hall and in plaster within the exhibition, the two columnlike masses of each pair seem whipped upward by a multitude of gouged troughs, hand-sized and smaller. In the plaster couple the painterliness of facture is accentuated by applied highlights of color, while in the bronzes the verdant patina emphasizes the work’s mass over its flickering surface. The Grandes Nudités appear both monolithic (like linga or stele) and baroque (like an agitated sea forever frozen), and it is this doubled duality that is striking.

Kirili resists the linearity of an art history that would keep each artist snug in his own time. He has just inaugurated a public commission of three 12-foot-high vertical posts in cast and polychromed resin at Provence’s Abbaye de Montmajour, parts of

which date back to the 12th century. The sculpture consciously evokes ’60s pieces by Barnett Newman, such as Here II. Kirili asserts the need for, and the right of, artists to erase chronology and stylistic barriers, to interact with other art forms, to converse with the dead—to keep their own work alive by whatever means. By showing in Valenciennes alongside Jean-Baptiste Carpeaux, Kirili has picked up a forgotten thread which links the earlier artist’s masterful modeling with the improvisation and speed crucial to much contemporary work.

“Kirili Dialogue Avec Carpeaux” was seen at the Musée des Beaux-Arts de Valenciennes [Apr. 6-Sept. 23]. It was accompanied by a catalogue containing essays by Phillippe Sollers, Serge Lemoine and Patrick Ramade, as well as an interview with the artist conducted by Ramade.