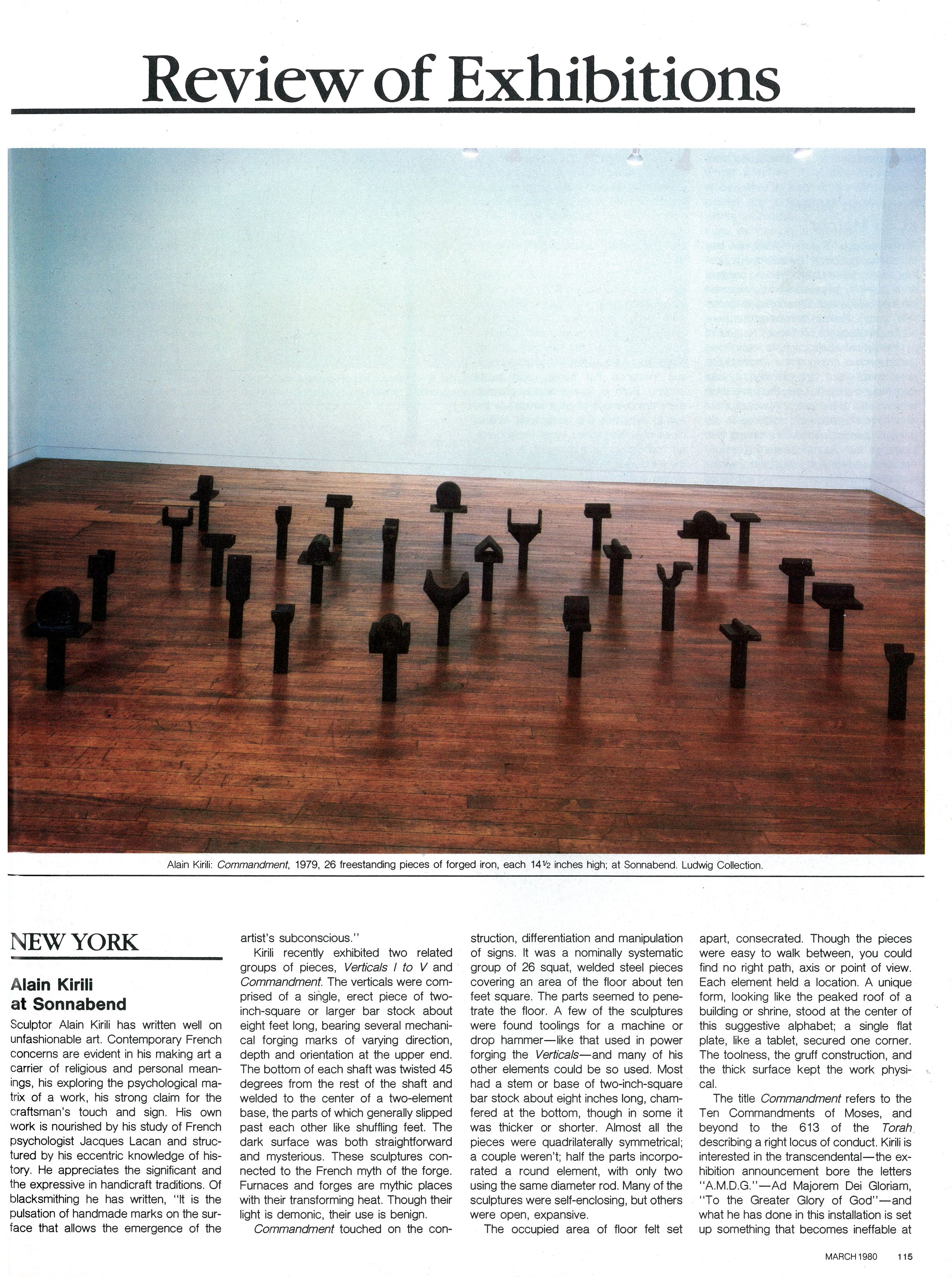 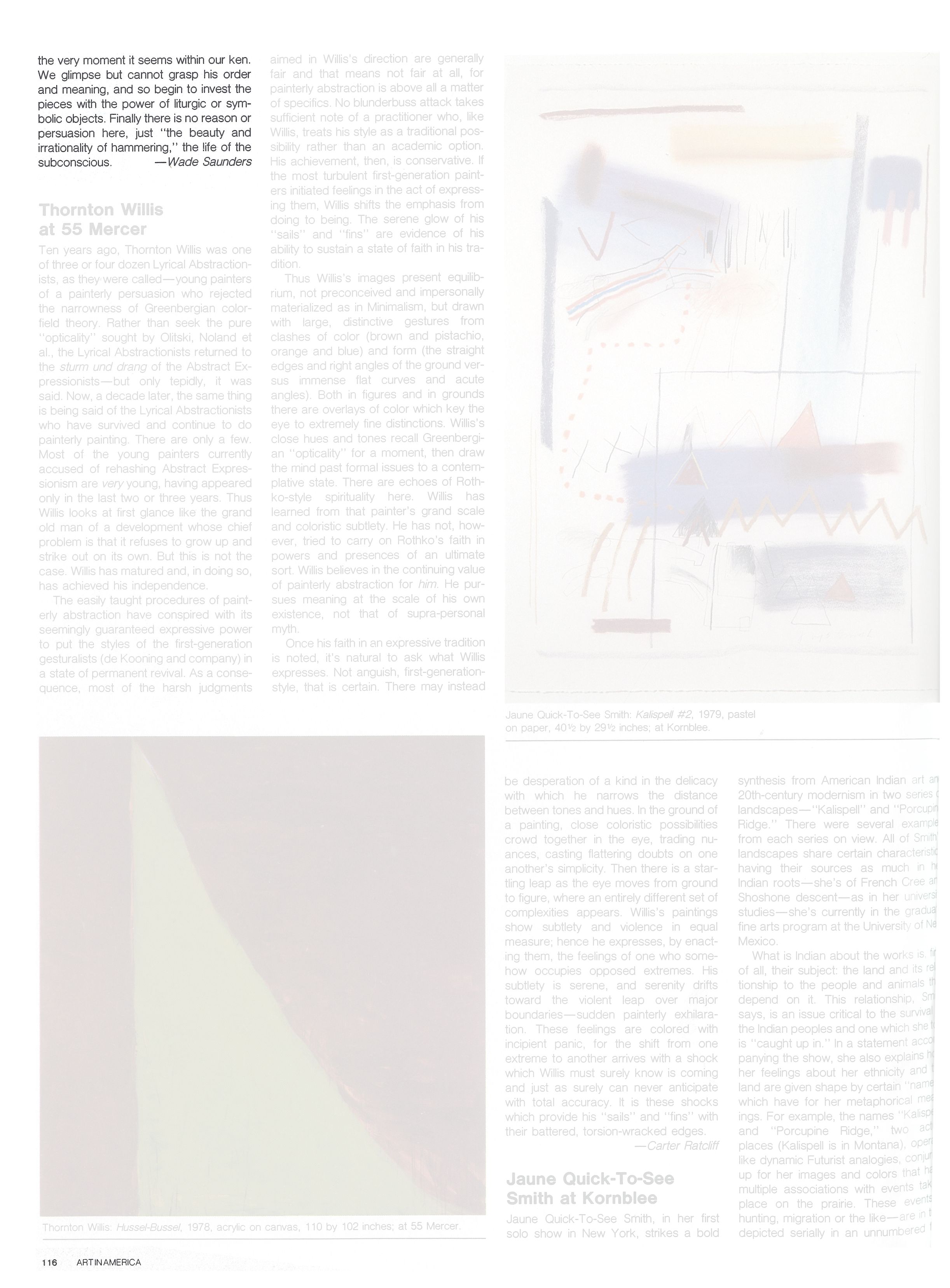 Sculptor Alain Kirili has written well on unfashionable art. Contemporary French concerns are evident in his making art a carrier of religious and personal meanings, his exploring the psychological matrix of a work, his strong claim for the craftsman’s touch and sign. His own work is nourished by his study of French psychiatrist Jacques Lacan and structured by his eccentric knowledge of history. He appreciates the significant and the expressive in handicraft traditions. Of blacksmithing he has written, “It is the pulsation of handmade marks on the surface that allows the emergence of the artist’s subconscious ”

Kirili recently exhibited two related groups of pieces, Verticals I to V and Commandment. The verticals were comprised of a single, erect piece of two- inch-square or larger bar stock about eight feet long, bearing several mechanical forging marks of varying direction, depth and orientation at the upper end. The bottom of each shaft was twisted 45 degrees from the rest of the shaft and welded to the center of a two-element base, the parts of which generally slipped past each other like shuffling feet. The dark surface was both straightforward and mysterious. These sculptures connected to the French myth of the forge. Furnaces and forges are mythic places with their transforming heat. Though their light is demonic, their use is benign.

Commandment touched on the construction, differentiation and manipulation of signs. It was a nominally systematic group of 26 squat, welded steel pieces covering an area of the floor about ten feet square. The parts seemed to penetrate the floor. A few of the sculptures were found toolings for a machine or drop hammer—like that used in power forging the Verticals—and many of his other elements could be so used. Most had a stem or base of two-inch-square bar stock about eight inches long, chamfered at the bottom, though in some it was thicker or shorter Almost all the pieces were quadrilaterally symmetrical; a couple weren’t; half the parts incorporated a round element, with only two using the same diameter rod. Many of the sculptures were self-enclosing, but others were open, expansive.

The occupied area of floor felt set apart, consecrated. Though the pieces were easy to walk between, you could find no right path, axis or point of view. Each element held a location. A unique form, looking like the peaked roof of a building or shrine, stood at the center of this suggestive alphabet; a single flat plate, like a tablet, secured one corner. The toolness, the gruff construction, and the thick surface kept the work physical.

The title Commandment refers to the Ten Commandments of Moses, and beyond to the 613 of the Torah describing a right locus of conduct. Kirili is interested in the transcendental—the exhibition announcement bore the letters “A.M.D.G.”—Ad Majorem Dei Gloriam, “To the Greater Glory of God”—and what he has done in this installation is set up something that becomes ineffable at the very moment it seems within our ken. We glimpse but cannot grasp his order and meaning, and so begin to invest the pieces with the power of liturgic or symbolic objects. Finally there is no reason or persuasion here, just “the beauty and irrationality of hammering,” the life of the subconscious.