Bliss Over All, Elmar Trenkwalder 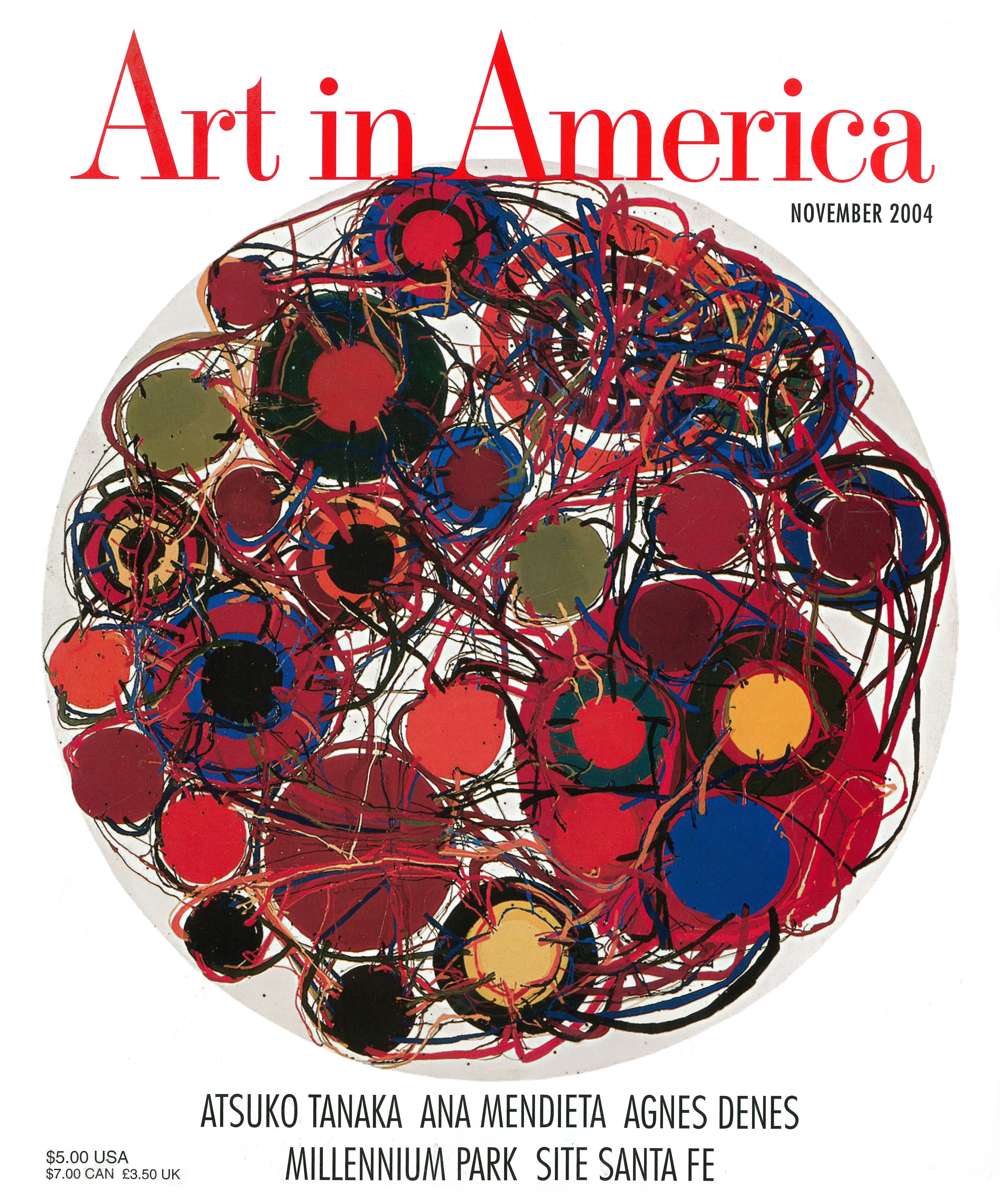 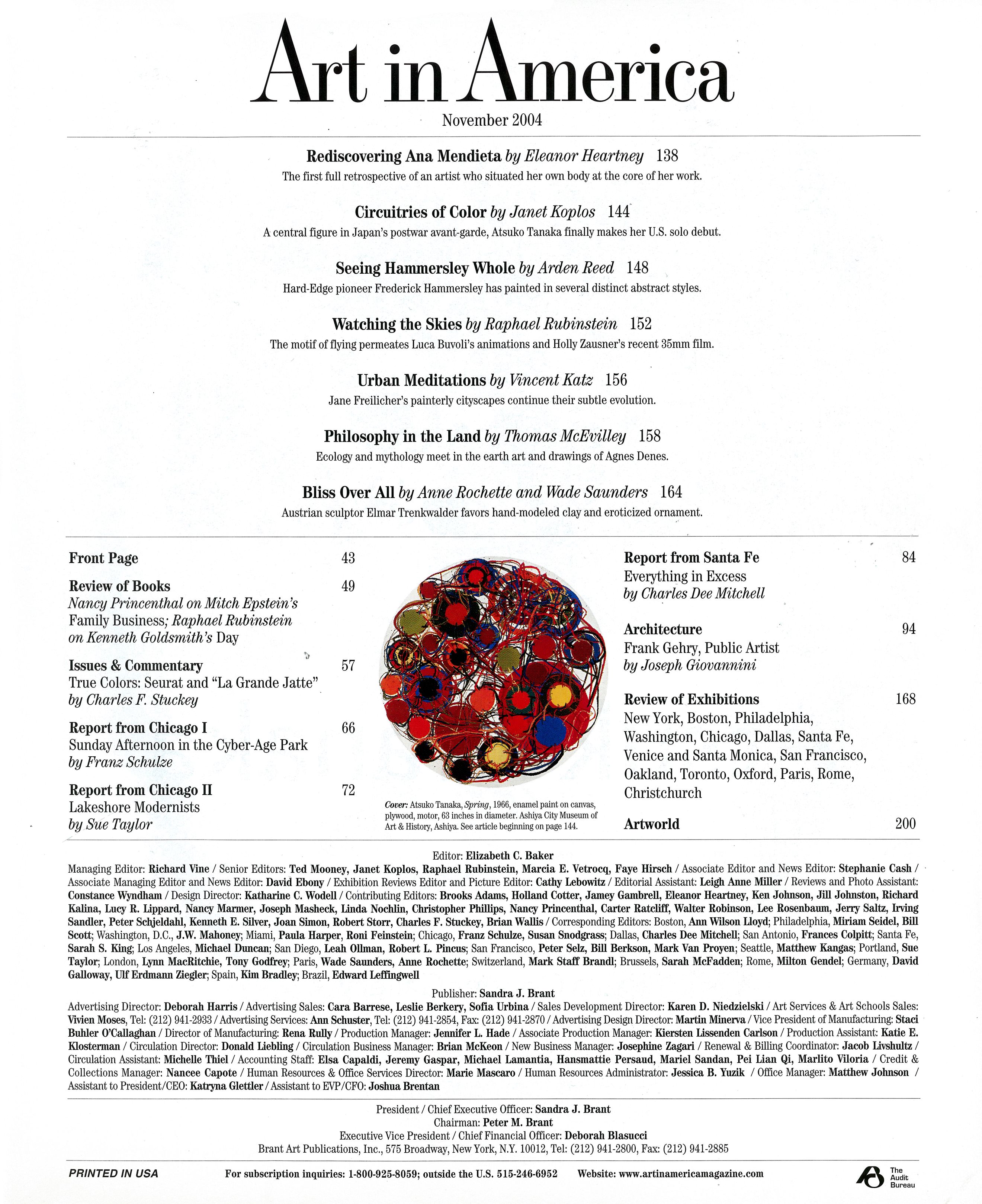 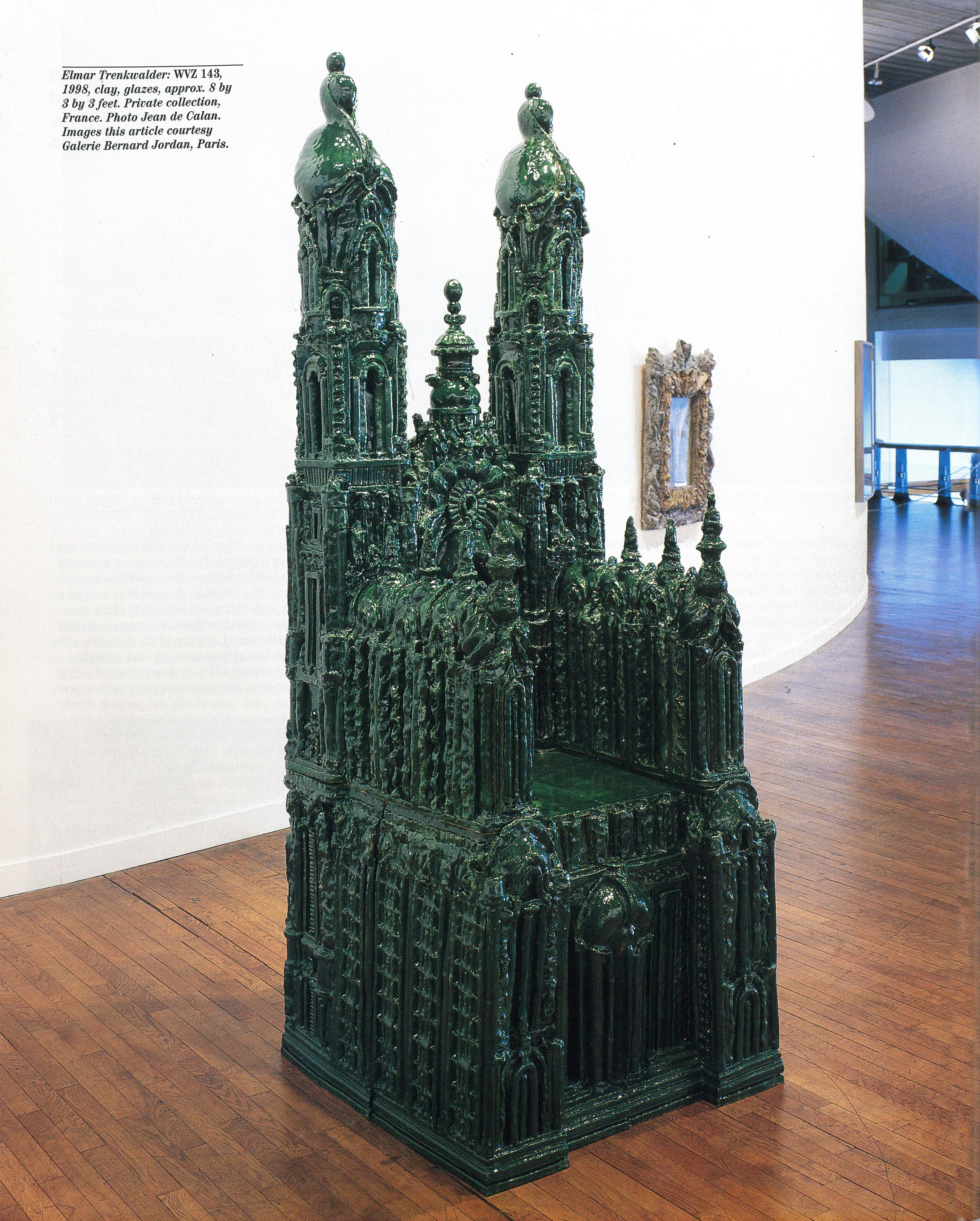 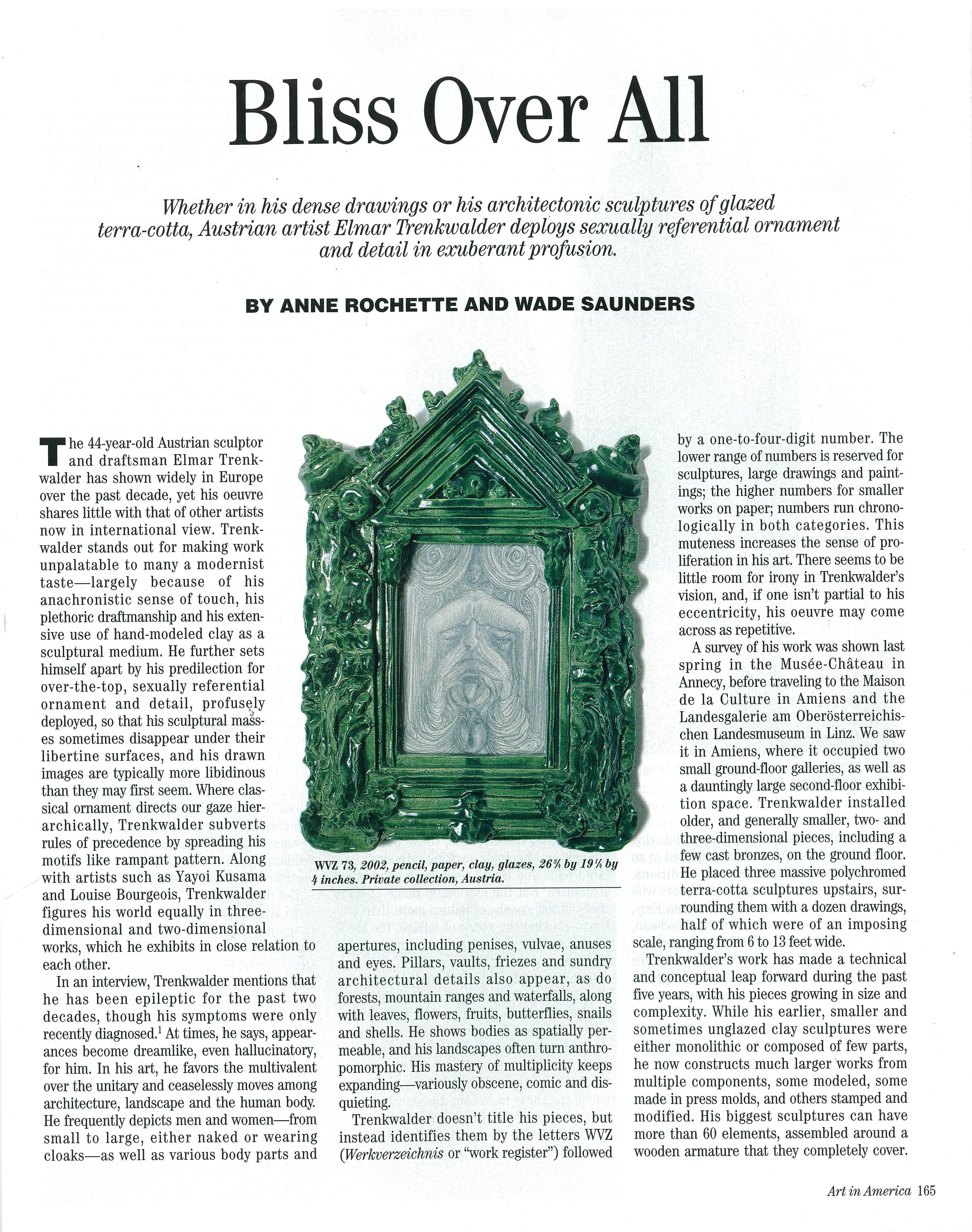 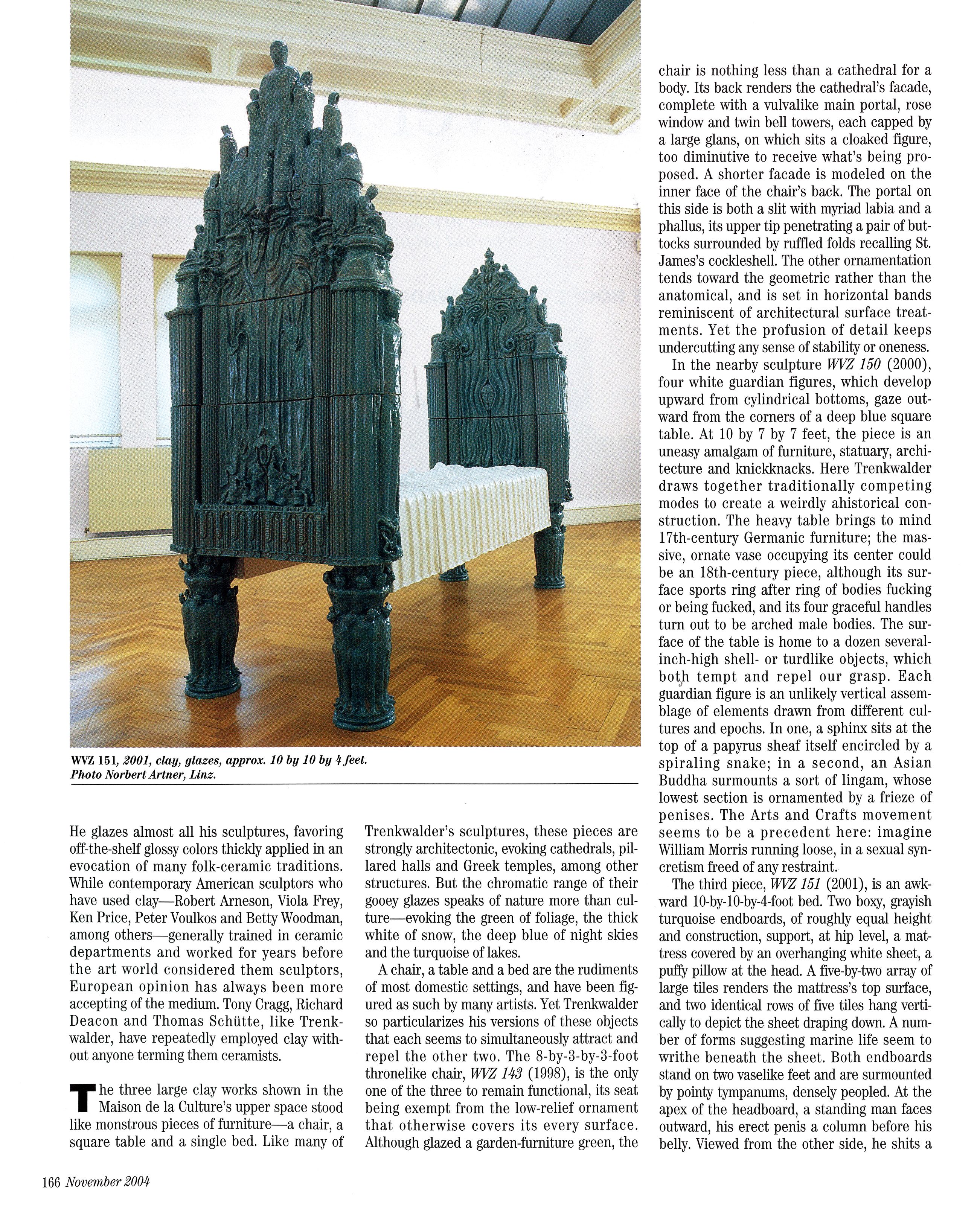 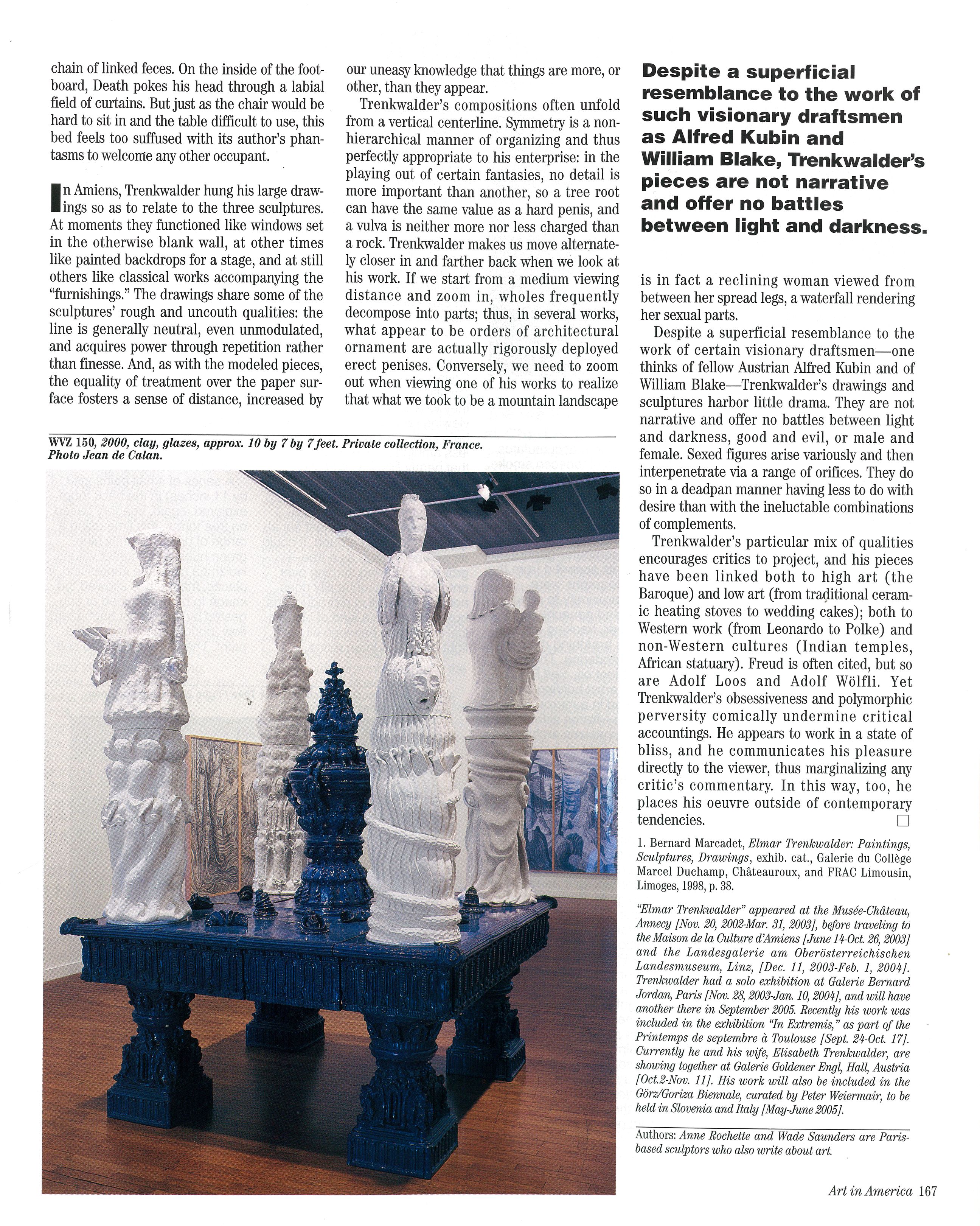 Whether in his dense drawings or his architectonic sculptures of glazed terra-cotta, Austrian artist Elmar Trenkwalder deploys sexually referential ornament and detail in exuberant profusion.

The 44-year-old Austrian sculptor and draftsman Elmar Trenkwalder has shown widely in Europe over the past decade, yet his oeuvre shares little with that of other artists now in international view. Trenkwalder stands out for making work unpalatable to many a modernist taste—largely because of his anachronistic sense of touch, his plethoric draftmanship and his extensive use of hand-modeled clay as a sculptural medium. He further sets himself apart by his predilection for over-the-top, sexually referential ornament and detail, profusely deployed, so that his sculptural masses sometimes disappear under their libertine surfaces, and his drawn images are typically more libidinous than they may first seem. Where classical ornament directs our gaze hierarchically, Trenkwalder subverts rules of precedence by spreading his motifs like rampant pattern. Along with artists such as Yayoi Kusama and Louise Bourgeois, Trenkwalder figures his world equally in three-dimensional and two-dimensional works, which he exhibits in close relation to each other.

In an interview, Trenkwalder mentions that he has been epileptic for the past two decades, though his symptoms were only recently diagnosed.1 At times, he says, appearances become dreamlike, even hallucinatory, for him. In his art, he favors the multivalent over the unitary and ceaselessly m soves among architecture, landscape and the human body. He frequently depicts men and women—from small to large, either naked or wearing cloaks—as well as various body parts and apertures, including penises, vulvae, anuses and eyes. Pillars, vaults, friezes and sundry architectural details also appear, as do forests, mountain ranges and waterfalls, along with leaves, flowers, fruits, butterflies, snails and shells. He shows bodies as spatially permeable, and his landscapes often turn anthropomorphic. His mastery of multiplicity keeps expanding—variously obscene, comic and disquieting.

Trenkwalder doesn’t title his pieces, but instead identifies them by the letters WVZ (Werkverzeichnis or “work register”) followed by a one-to-four-digit number. The lower range of numbers is reserved for sculptures, large drawings and paintings; the higher numbers for smaller works on paper; numbers run chronologically in both categories. This muteness increases the sense of proliferation in his art. There seems to be little room for irony in Trenkwalder’s vision, and, if one isn’t partial to his eccentricity, his oeuvre may come across as repetitive.

A survey of his work was shown last spring in the Musée-Château in Annecy, before traveling to the Maison de la Culture in Amiens and the Landesgalerie am Oberösterreichischen Landesmuseum in Linz. We saw it in Amiens, where it occupied two small ground-floor galleries, as well as a dauntingly large second-floor exhibition space. Trenkwalder installed older, and generally smaller, two- and three-dimensional pieces, including a few cast bronzes, on the ground floor. He placed three massive polychromed terra-cotta sculptures upstairs, surrounding them with a dozen drawings, half of which were of an imposing scale, ranging from 6 to 13 feet wide.

Trenkwalder’s work has made a technical and conceptual leap forward during the past five years, with his pieces growing in size and complexity. While his earlier, smaller and sometimes unglazed clay sculptures were either monolithic or composed of few parts, he now constructs much larger works from multiple components, some modeled, some made in press molds, and others stamped and modified. His biggest sculptures can have more than 60 elements, assembled around a wooden armature that they completely cover.

He glazes almost all his sculptures, favoring off-the-shelf glossy colors thickly applied in an evocation of many folk-ceramic traditions. While contemporary American sculptors who have used clay—Robert Arneson, Viola Frey, Ken Price, Peter Voulkos and Betty Woodman, among others—generally trained in ceramic departments and worked for years before the art world considered them sculptors, European opinion has always been more accepting of the medium. Tony Cragg, Richard Deacon and Thomas Schütte, like Trenkwalder, have repeatedly employed clay without anyone terming them ceramists.

The three large clay works shown in the Maison de la Culture’s upper space stood like monstrous pieces of furniture—a chair, a square table and a single bed. Like many of Trenkwalder’s sculptures, these pieces are strongly architectonic, evoking cathedrals, pillared halls and Greek temples, among other structures. But the chromatic range of their gooey glazes speaks of nature more than culture—evoking the green of foliage, the thick white of snow, the deep blue of night skies and the turquoise of lakes.

A chair, a table and a bed are the rudiments of most domestic settings, and have been figured as such by many artists. Yet Trenkwalder so particularizes his versions of these objects that each seems to simultaneously attract and repel the other two. The 8-by-3-by-3-foot thronelike chair, WVZ143 (1998), is the only one of the three to remain functional, its seat being exempt from the low-relief ornament that otherwise covers its every surface. Although glazed a garden-furniture green, the chair is nothing less than a cathedral for a body. Its back renders the cathedral’s facade, complete with a vulvalike main portal, rose window and twin bell towers, each capped by a large glans, on which sits a cloaked figure, too diminutive to receive what’s being proposed. A shorter facade is modeled on the inner face of the chair’s back. The portal on this side is both a slit with myriad labia and a phallus, its upper tip penetrating a pair of buttocks surrounded by ruffled folds recalling St. James’s cockleshell. The other ornamentation tends toward the geometric rather than the anatomical, and is set in horizontal bands reminiscent of architectural surface treatments. Yet the profusion of detail keeps undercutting any sense of stability or oneness.

In the nearby sculpture WVZ 150 (2000), four white guardian figures, which develop upward from cylindrical bottoms, gaze outward from the corners of a deep blue square table. At 10 by 7 by 7 feet, the piece is an uneasy amalgam of furniture, statuary, architecture and knickknacks. Here Trenkwalder draws together traditionally competing modes to create a weirdly ahistorical construction. The heavy table brings to mind 17th-century Germanic furniture; the massive, ornate vase occupying its center could be an 18th-century piece, although its surface sports ring after ring of bodies fucking or being fucked, and its four graceful handles turn out to be arched male bodies. The surface of the table is home to a dozen several-inch-high shell- or turdlike objects, which both tempt and repel our grasp. Each guardian figure is an unlikely vertical assemblage of elements drawn from different cultures and epochs. In one, a sphinx sits at the top of a papyrus sheaf itself encircled by a spiraling snake; in a second, an Asian Buddha surmounts a sort of lingam, whose lowest section is ornamented by a frieze of penises. The Arts and Crafts movement seems to be a precedent here: imagine William Morris running loose, in a sexual syncretism freed of any restraint.

The third piece, WVZ 151 (2001), is an awkward 10-by-10-by-4-foot bed. Two boxy, grayish turquoise endboards, of roughly equal height and construction, support, at hip level, a mattress covered by an overhanging white sheet, a puffy pillow at the head. A five-by-two array of large tiles renders the mattress’s top surface, and two identical rows of five tiles hang vertically to depict the sheet draping down. A number of forms suggesting marine life seem to writhe beneath the sheet. Both endboards stand on two vaselike feet and are surmounted by pointy tympanums, densely peopled. At the apex of the headboard, a standing man faces outward, his erect penis a column before his belly. Viewed from the other side, he shits a chain of linked feces. On the inside of the footboard, Death pokes his head through a labial field of curtains. But just as the chair would be hard to sit in and the table difficult to use, this bed feels too suffused with its author’s phantasms to welcome any other occupant.

In Amiens, Trenkwalder hung his large drawings so as to relate to the three sculptures. At moments they functioned like windows set in the otherwise blank wall, at other times like painted backdrops for a stage, and at still others like classical works accompanying the “furnishings.” The drawings share some of the sculptures’ rough and uncouth qualities: the line is generally neutral, even unmodulated, and acquires power through repetition rather than finesse. And, as with the modeled pieces, the equality of treatment over the paper surface fosters a sense of distance, increased by our uneasy knowledge that things are more, or other, than they appear.

Trenkwalder’s compositions often unfold from a vertical centerline. Symmetry is a non-hierarchical manner of organizing and thus perfectly appropriate to his enterprise: in the playing out of certain fantasies, no detail is more important than another, so a tree root can have the same value as a hard penis, and a vulva is neither more nor less charged than a rock. Trenkwalder makes us move alternately closer in and farther back when we look at his work. If we start from a medium viewing distance and zoom in, wholes frequently decompose into parts; thus, in several works, what appear to be orders of architectural ornament are actually rigorously deployed erect penises. Conversely, we need to zoom out when viewing one of his works to realize that what we took to be a mountain landscape is in fact a reclining woman viewed from between her spread legs, a waterfall rendering her sexual parts.

Despite a superficial resemblance to the work of certain visionary draftsmen—one thinks of fellow Austrian Alfred Kubin and of William Blake—Trenkwalder’s drawings and sculptures harbor little drama. They are not narrative and offer no battles between light and darkness, good and evil, or male and female. Sexed figures arise variously and then interpenetrate via a range of orifices. They do so in a deadpan manner having less to do with desire than with the ineluctable combinations of complements.

Trenkwalder’s particular mix of qualities encourages critics to project, and his pieces have been linked both to high art (the Baroque) and low art (from traditional ceramic heating stoves to wedding cakes); both to Western work (from Leonardo to Polke) and non-Western cultures (Indian temples, African statuary). Freud is often cited, but so are Adolf Loos and Adolf Wolfli. Yet Trenkwalder’s obsessiveness and polymorphic perversity comically undermine critical accountings. He appears to work in a state of bliss, and he communicates his pleasure directly to the viewer, thus marginalizing any critic’s commentary. In this way, too, he places his oeuvre outside of contemporary tendencies.