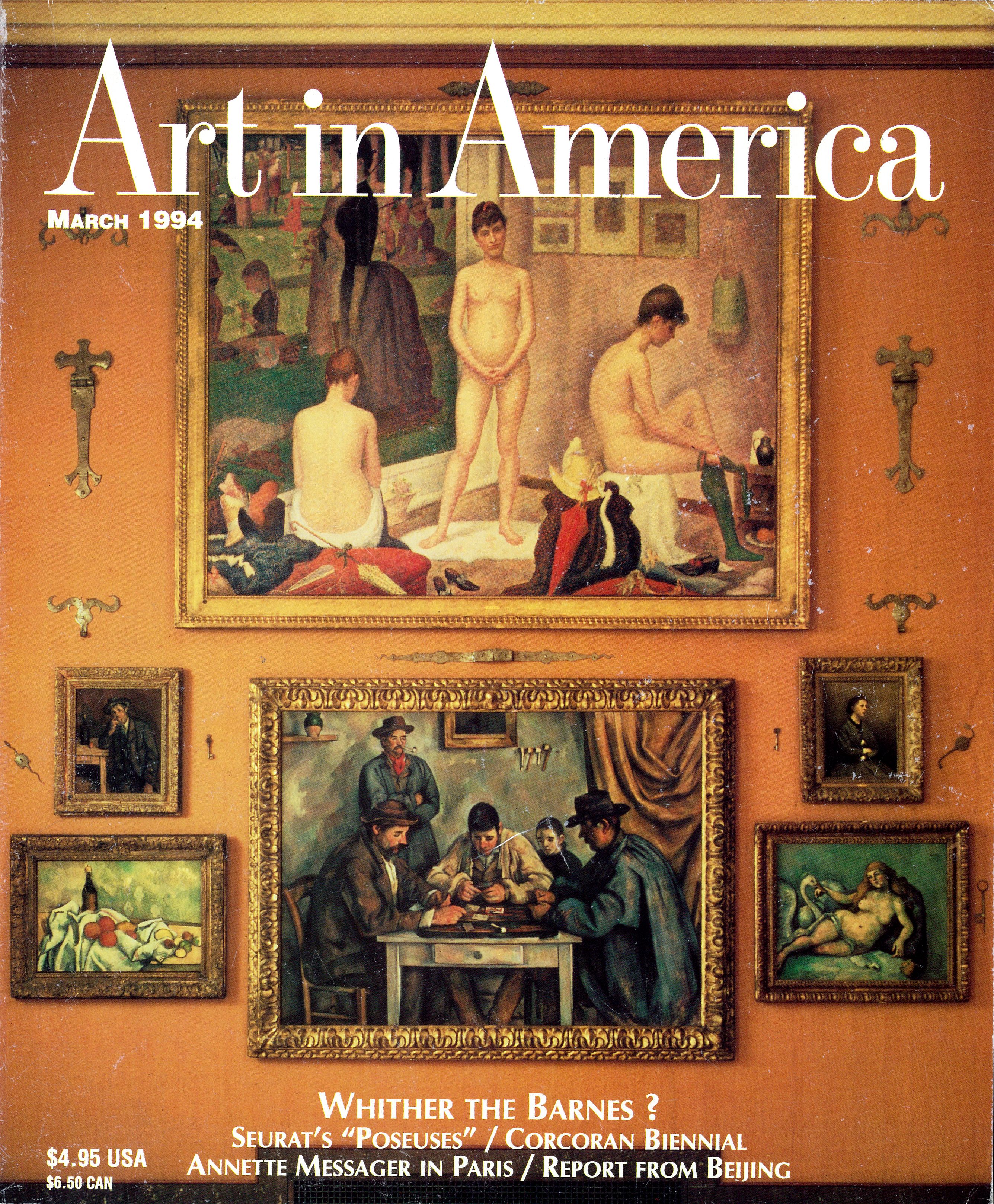 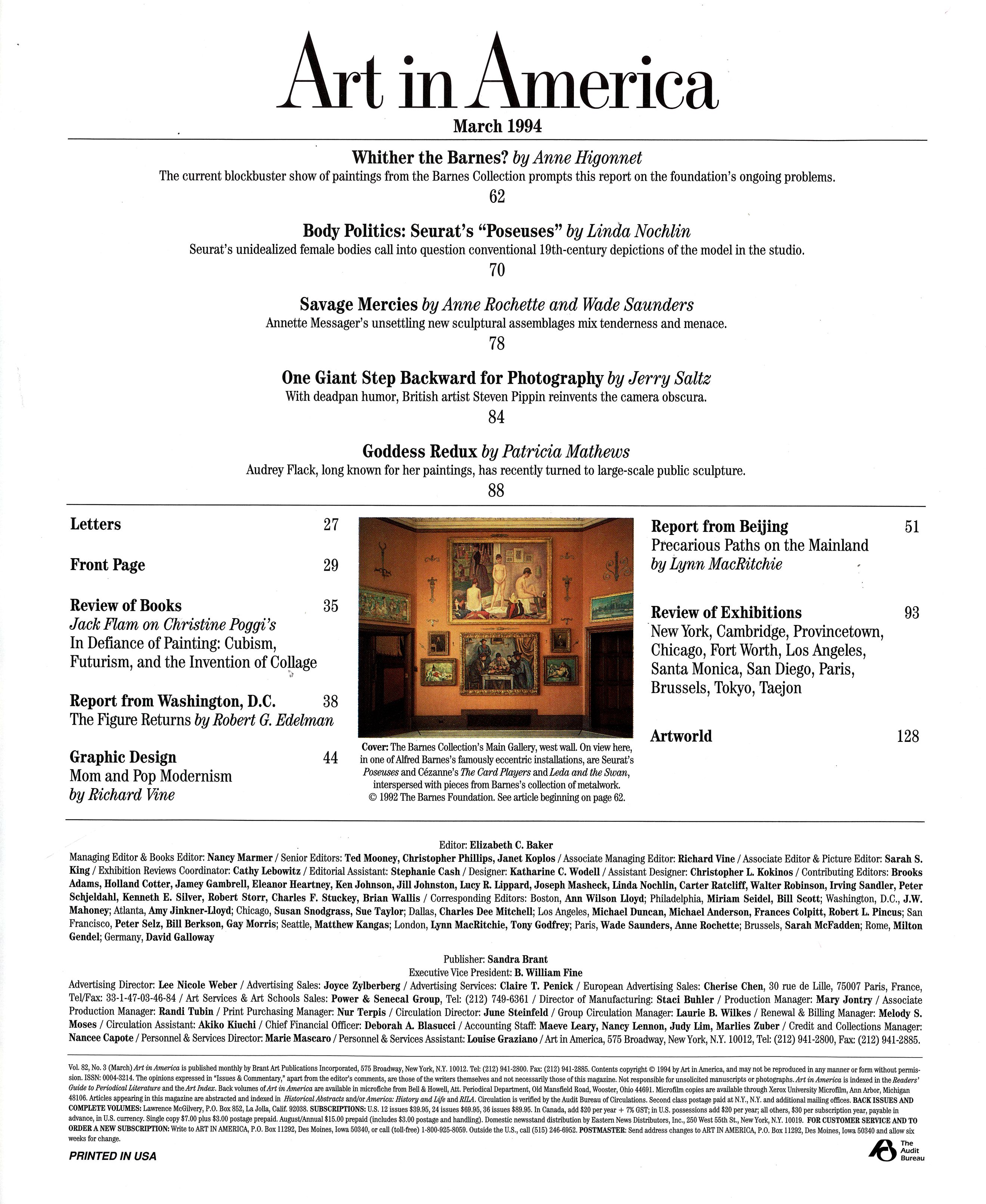 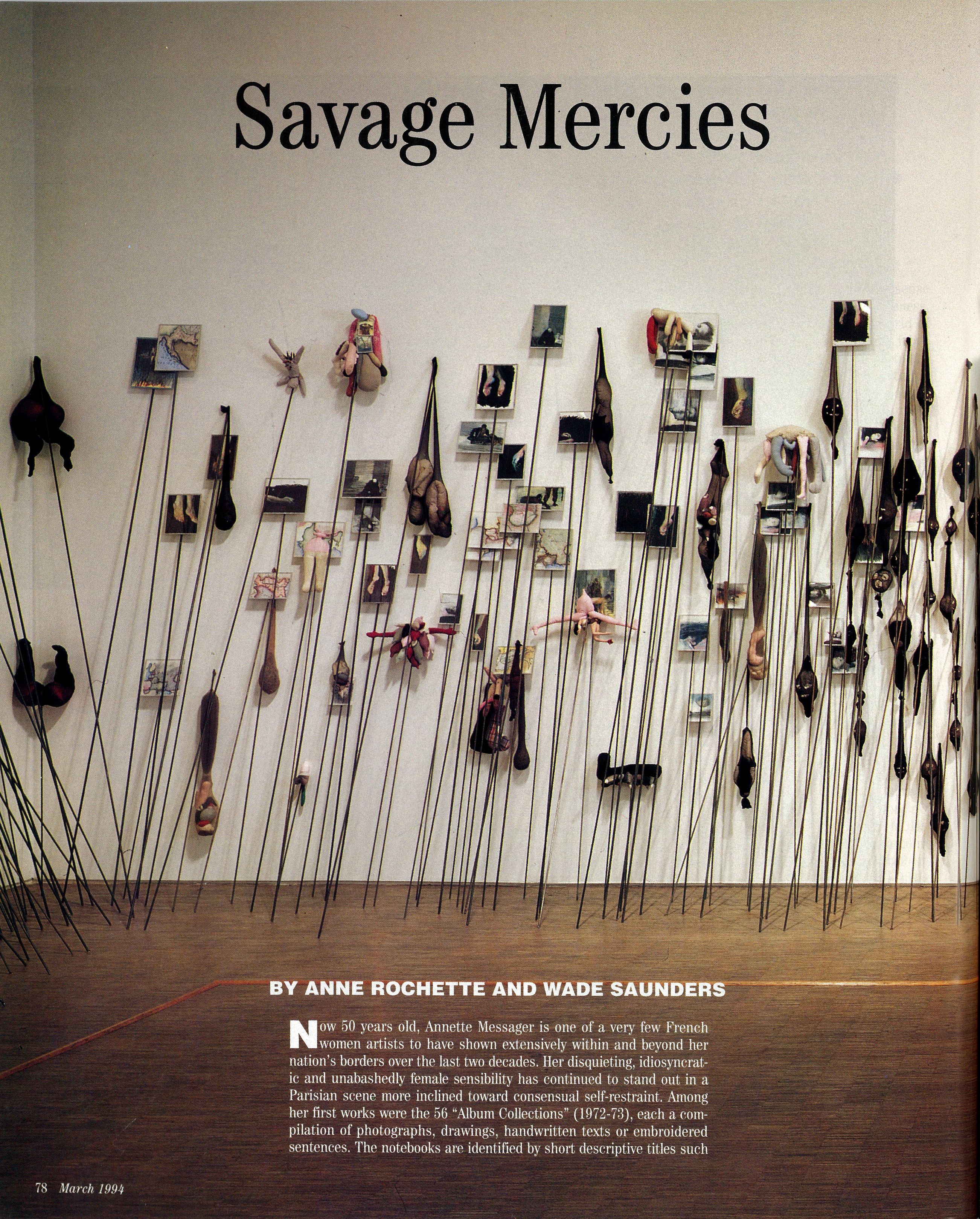 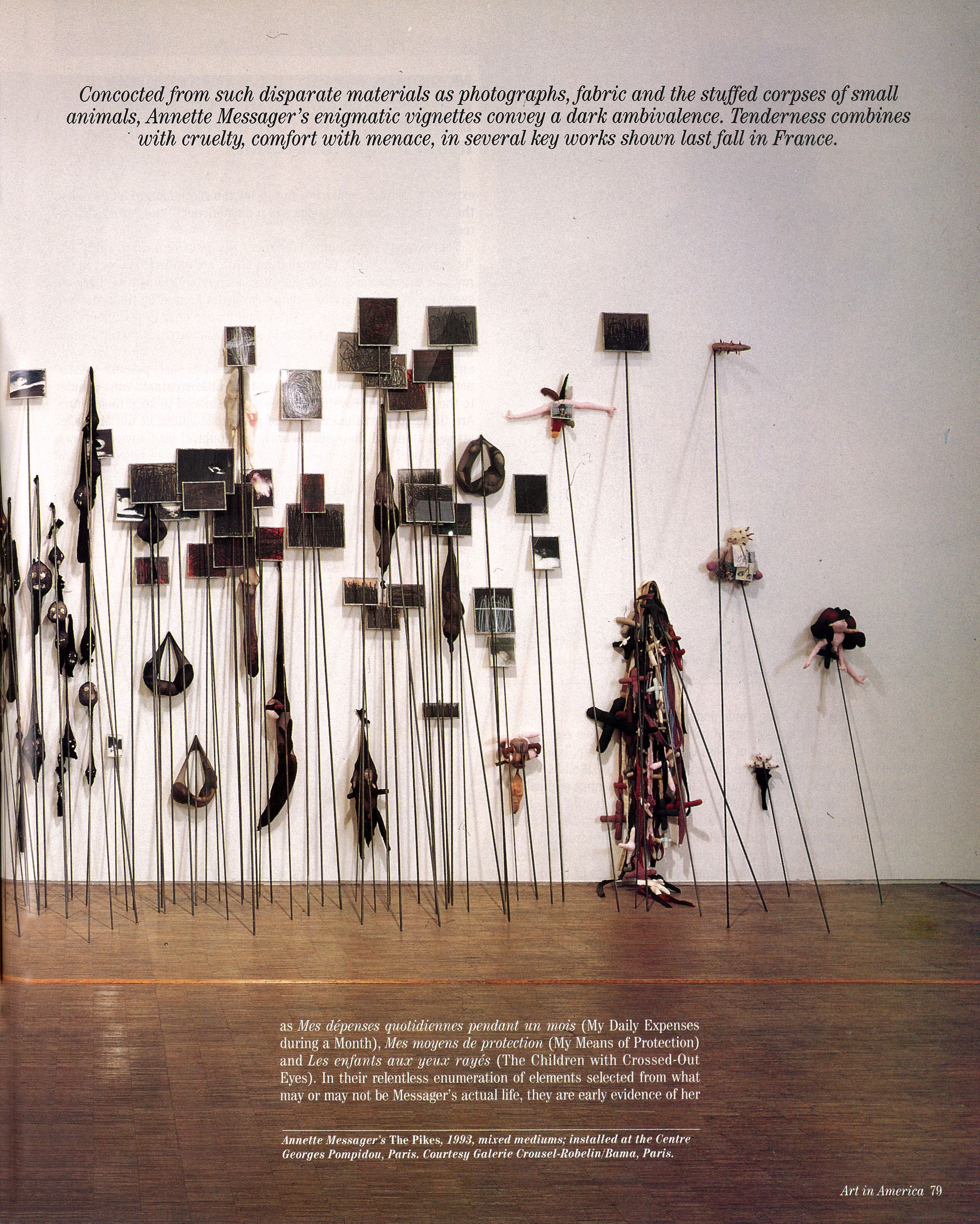 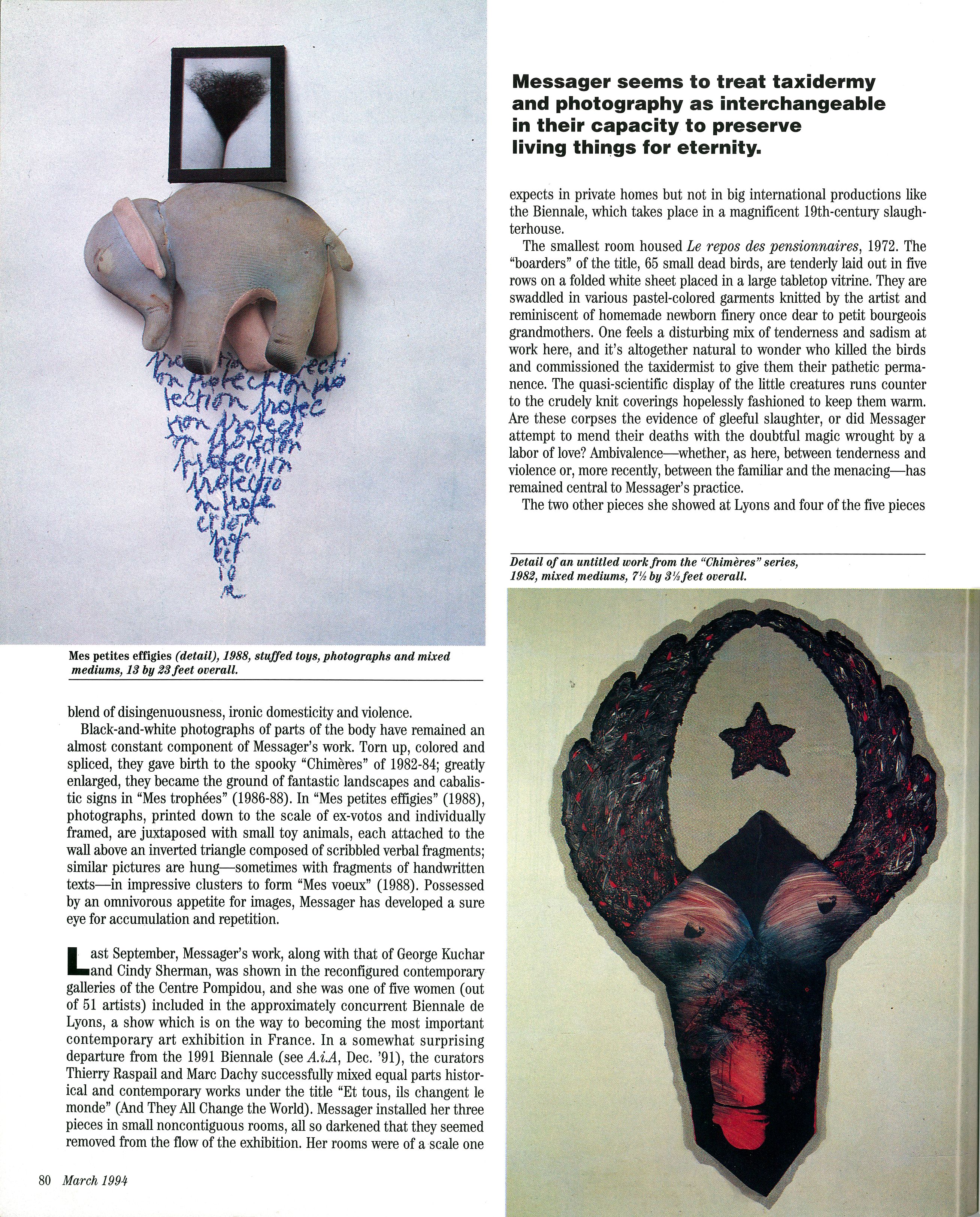 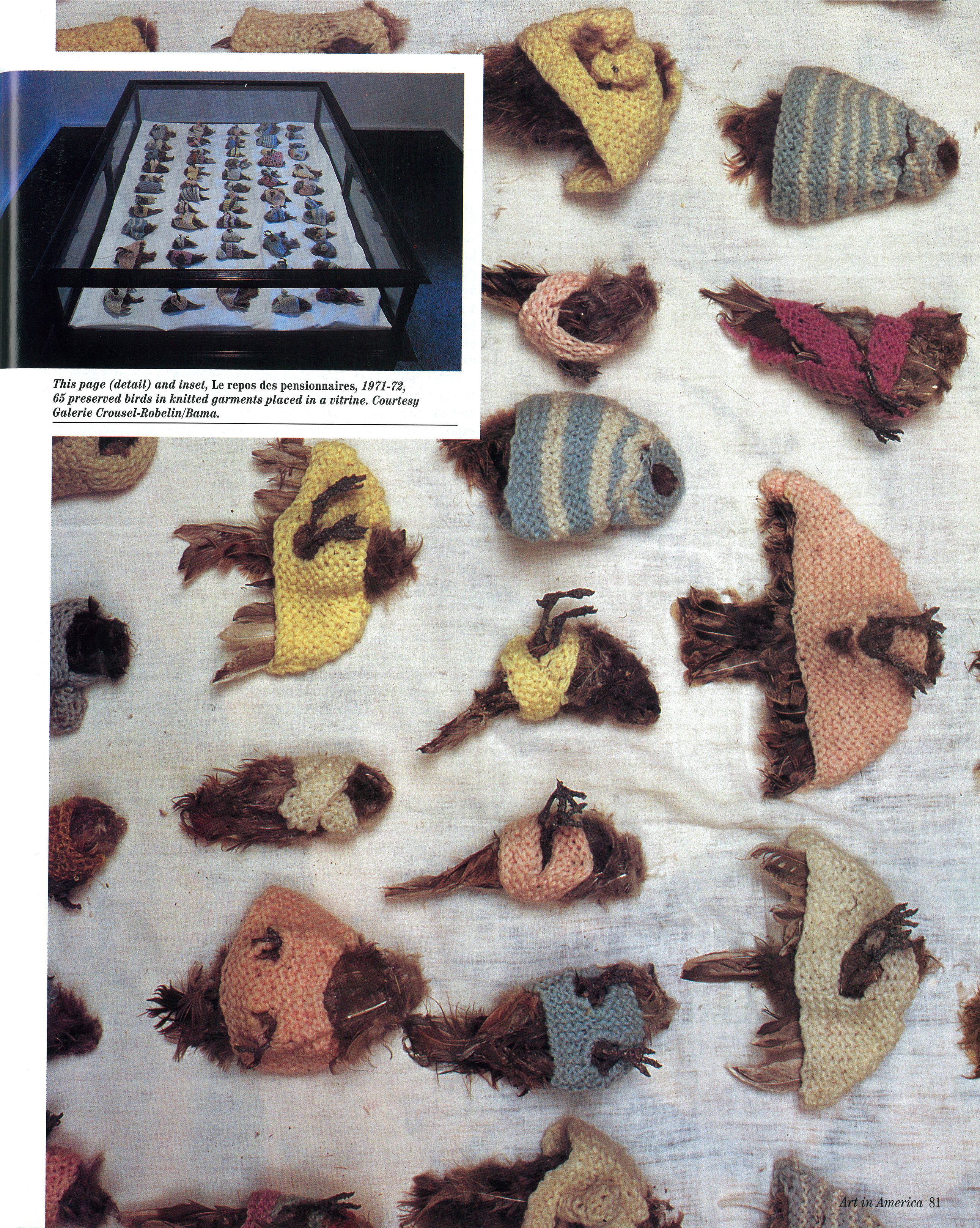 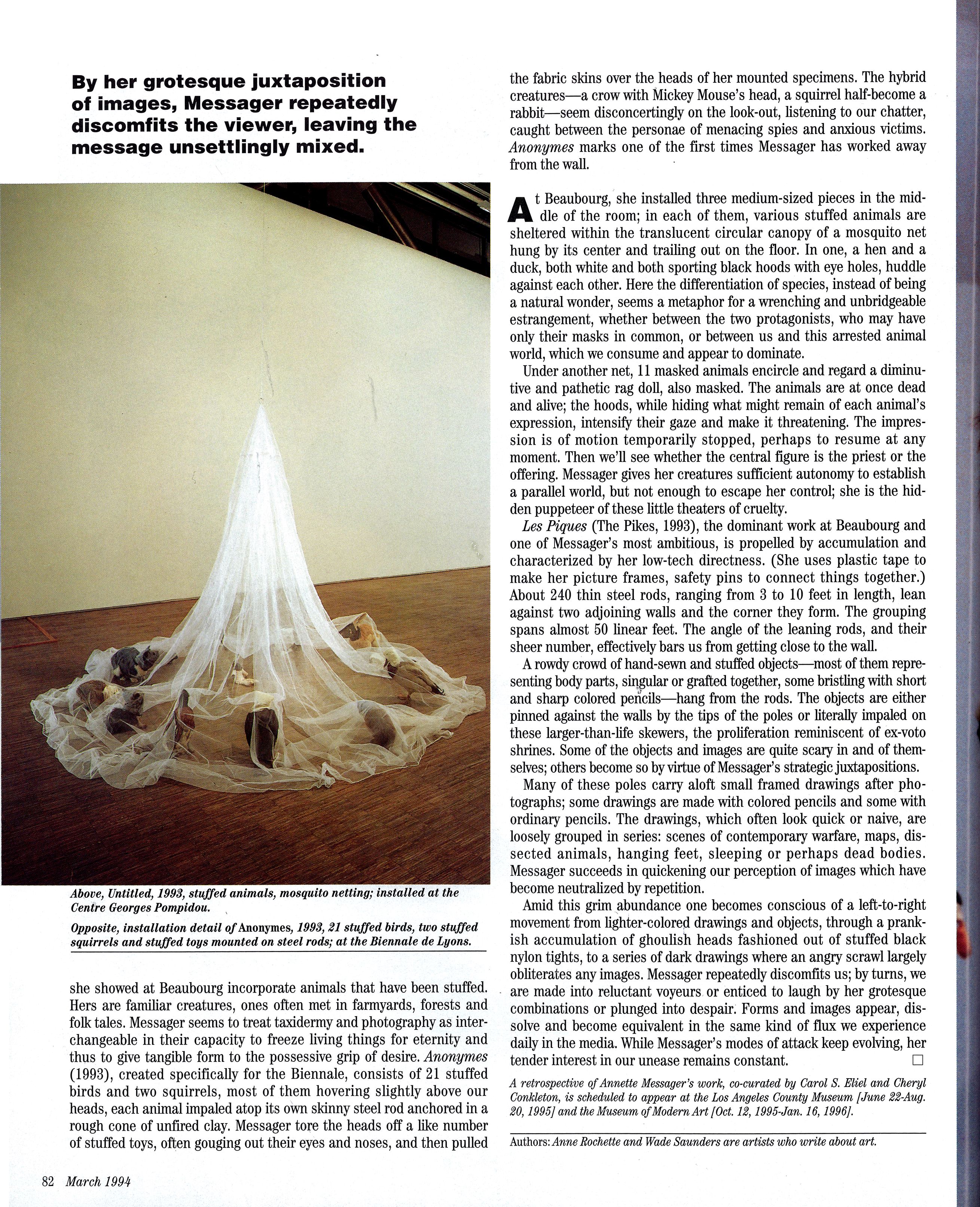 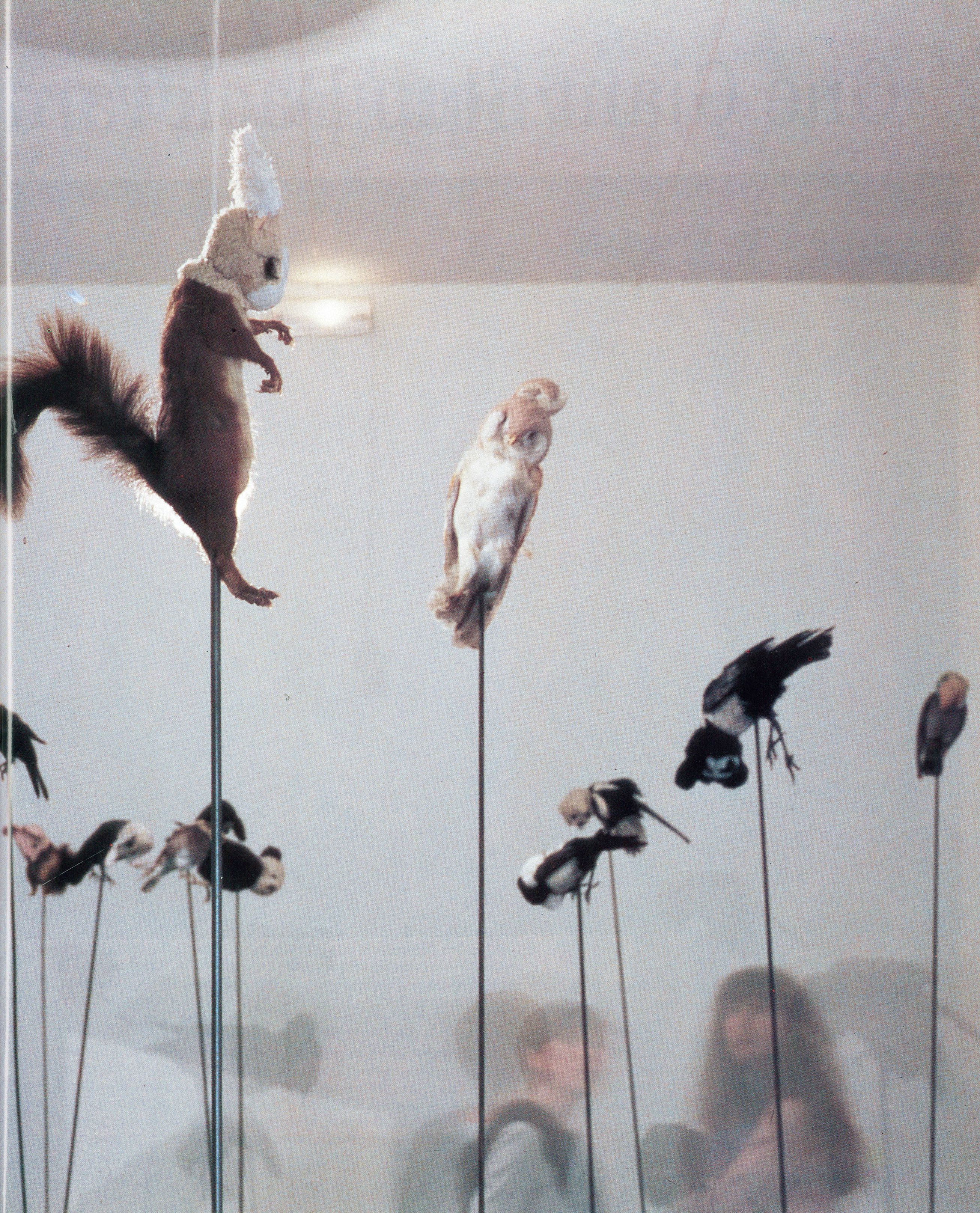 Now 50 years old, Annette Messager is one of a very few French women artists to have shown extensively within and beyond her nation’s borders over the last two decades. Her disquieting, idiosyncratic and unabashedly female sensibility has continued to stand out in a Parisian scene more inclined toward consensual self-restraint. Among her first works were the 56 “Album Collections” (1972-73), each a compilation of photographs, drawings, handwritten texts or embroidered sentences. The notebooks are identified by short descriptive titles such as Mes dépenses quotidiennes pendant un mois (My Daily Expenses during a Month), Mes moyens de protection (My Means of Protection) and Les enfants aux yeux rayés (The Children with Crossed-Out Eyes). In their relentless enumeration of elements selected from what may or may not be Messager’s actual life, they are early evidence of her blend of disingenuousness, ironic domesticity and violence.

Black-and-white photographs of parts of the body have remained an almost constant component of Messager’s work. Torn up, colored and spliced, they gave birth to the spooky “Chimères” of 1982-84; greatly enlarged, they became the ground of fantastic landscapes and cabalistic signs in “Mes trophées” (1986-88). In “Mes petites effigies” (1988), photographs, printed down to the scale of ex-votos and individually framed, are juxtaposed with small toy animals, each attached to the wall above an inverted triangle composed of scribbled verbal fragments; similar pictures are hung—sometimes with fragments of handwritten texts—in impressive clusters to form “Mes voeux” (1988). Possessed by an omnivorous appetite for images, Messager has developed a sure eye for accumulation and repetition.

Last September, Messager’s work, along with that of George Kuchar and Cindy Sherman, was shown in the reconfigured contemporary galleries of the Centre Pompidou, and she was one of five women (out of 51 artists) included in the approximately concurrent Biennale de Lyons, a show which is on the way to becoming the most important contemporary art exhibition in France. In a somewhat surprising departure from the 1991 Biennale (see A.i.A., Dec. ’91), the curators Thierry Raspail and Marc Dachy successfully mixed equal parts historical and contemporary works under the title “Et tous, ils changent le monde” (And They All Change the World). Messager installed her three pieces in small noncontiguous rooms, all so darkened that they seemed removed from the flow of the exhibition. Her rooms were of a scale one expects in private homes but not in big international productions like the Biennale, which takes place in a magnificent 19th-century slaughterhouse.

The smallest room housed Le repos des pensionnaires, 1972. The “boarders” of the title, 65 small dead birds, are tenderly laid out in five rows on a folded white sheet placed in a large tabletop vitrine. They are swaddled in various pastel-colored garments knitted by the artist and reminiscent of homemade newborn finery once dear to petit bourgeois grandmothers. One feels a disturbing mix of tenderness and sadism at work here, and it’s altogether natural to wonder who killed the birds and commissioned the taxidermist to give them their pathetic permanence. The quasi-scientific display of the little creatures runs counter to the crudely knit coverings hopelessly fashioned to keep them warm. Are these corpses the evidence of gleeful slaughter, or did Messager attempt to mend their deaths with the doubtful magic wrought by a labor of love? Ambivalence—whether, as here, between tenderness and violence or, more recently, between the familiar and the menacing—has remained central to Messager’s practice.

The two other pieces she showed at Lyons and four of the five pieces she showed at Beaubourg incorporate animals that have been stuffed. Hers are familiar creatures, ones often met in farmyards, forests and folk tales. Messager seems to treat taxidermy and photography as interchangeable in their capacity to freeze living things for eternity and thus to give tangible form to the possessive grip of desire. Anonymes (1993), created specifically for the Biennale, consists of 21 stuffed birds and two squirrels, most of them hovering slightly above our heads, each animal impaled atop its own skinny steel rod anchored in a rough cone of unfired clay. Messager tore the heads off a like number of stuffed toys, often gouging out their eyes and noses, and then pulled the fabric skins over the heads of her mounted specimens. The hybrid creatures—a crow with Mickey Mouse’s head, a squirrel half-become a rabbit—seem disconcertingly on the look-out, listening to our chatter, caught between the personae of menacing spies and anxious victims. Anonymes marks one of the first times Messager has worked away from the wall.

At Beaubourg, she installed three medium-sized pieces in the middle of the room; in each of them, various stuffed animals are sheltered within the translucent circular canopy of a mosquito net hung by its center and trailing out on the floor. In one, a hen and a duck, both white and both sporting black hoods with eye holes, huddle against each other. Here the differentiation of species, instead of being a natural wonder, seems a metaphor for a wrenching and unbridgeable estrangement, whether between the two protagonists, who may have only their masks in common, or between us and this arrested animal world, which we consume and appear to dominate.

Under another net, 11 masked animals encircle and regard a diminutive and pathetic rag doll, also masked. The animals are at once dead and alive; the hoods, while hiding what might remain of each animal’s expression, intensify their gaze and make it threatening. The impression is of motion temporarily stopped, perhaps to resume at any moment. Then we’ll see whether the central figure is the priest or the offering. Messager gives her creatures sufficient autonomy to establish a parallel world, but not enough to escape her control; she is the hidden puppeteer of these little theaters of cruelty.

Les Piques (The Pikes, 1993), the dominant work at Beaubourg and one of Messager’s most ambitious, is propelled by accumulation and characterized by her low-tech directness. (She uses plastic tape to make her picture frames, safety pins to connect things together.) About 240 thin steel rods, ranging from 3 to 10 feet in length, lean against two adjoining walls and the corner they form. The grouping spans almost 50 linear feet. The angle of the leaning rods, and their sheer number, effectively bars us from getting close to the wall.

A rowdy crowd of hand-sewn and stuffed objects—most of them representing body parts, singular or grafted together, some bristling with short and sharp colored pencils—hang from the rods. The objects are either pinned against the walls by the tips of the poles or literally impaled on these larger-than-life skewers, the proliferation reminiscent of ex-voto shrines. Some of the objects and images are quite scary in and of themselves; others become so by virtue of Messager’s strategic juxtapositions.

Many of these poles carry aloft small framed drawings after photographs; some drawings are made with colored pencils and some with ordinary pencils. The drawings, which often look quick or naive, are loosely grouped in series: scenes of contemporary warfare, maps, dissected animals, hanging feet, sleeping or perhaps dead bodies. Messager succeeds in quickening our perception of images which have become neutralized by repetition.

Amid this grim abundance one becomes conscious of a left-to-right movement from lighter-colored drawings and objects, through a prankish accumulation of ghoulish heads fashioned out of stuffed black nylon tights, to a series of dark drawings where an angry scrawl largely obliterates any images. Messager repeatedly discomfits us; by turns, we are made into reluctant voyeurs or enticed to laugh by her grotesque combinations or plunged into despair. Forms and images appear, dissolve and become equivalent in the same kind of flux we experience daily in the media. While Messager’s modes of attack keep evolving, her tender interest in our unease remains constant.