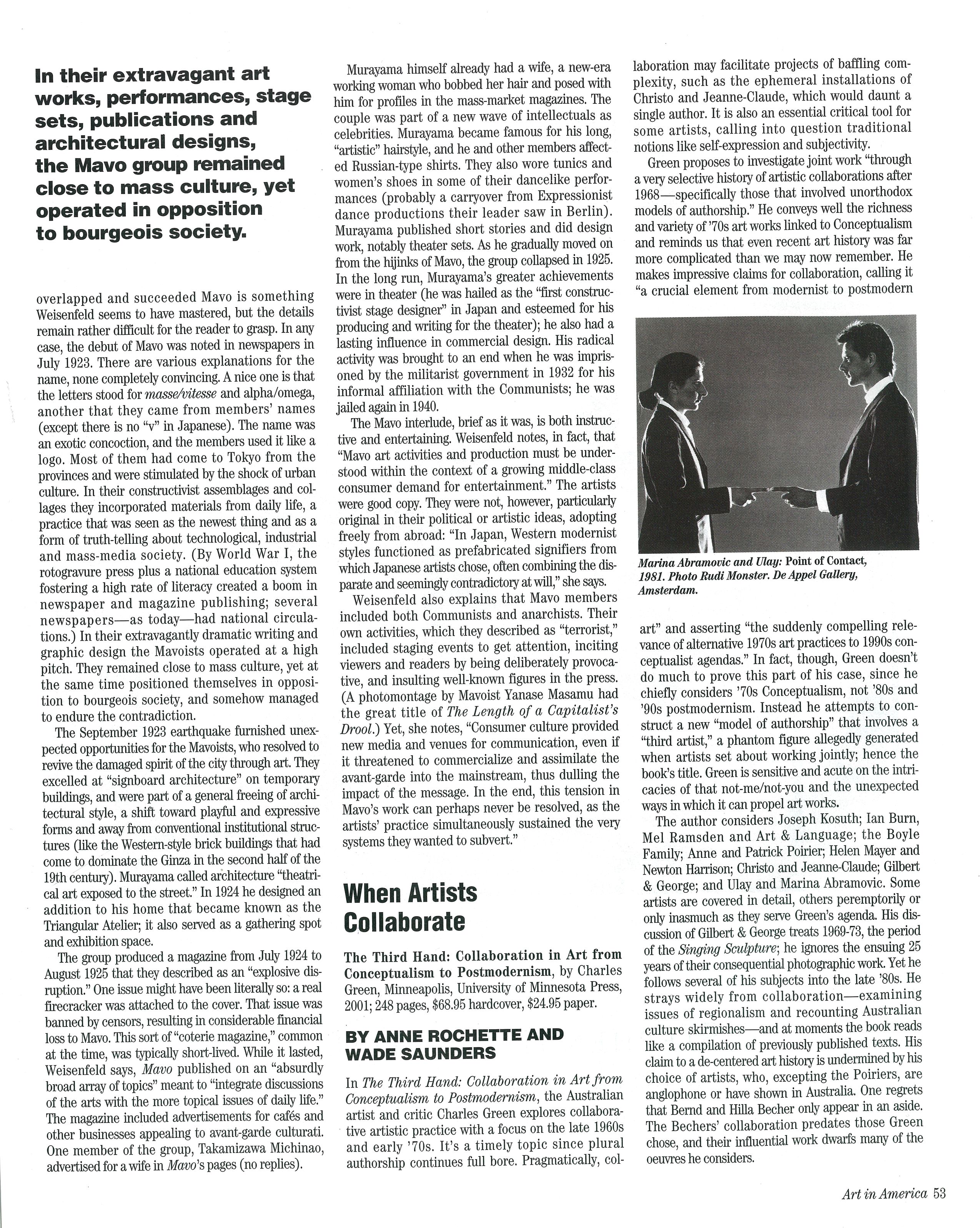 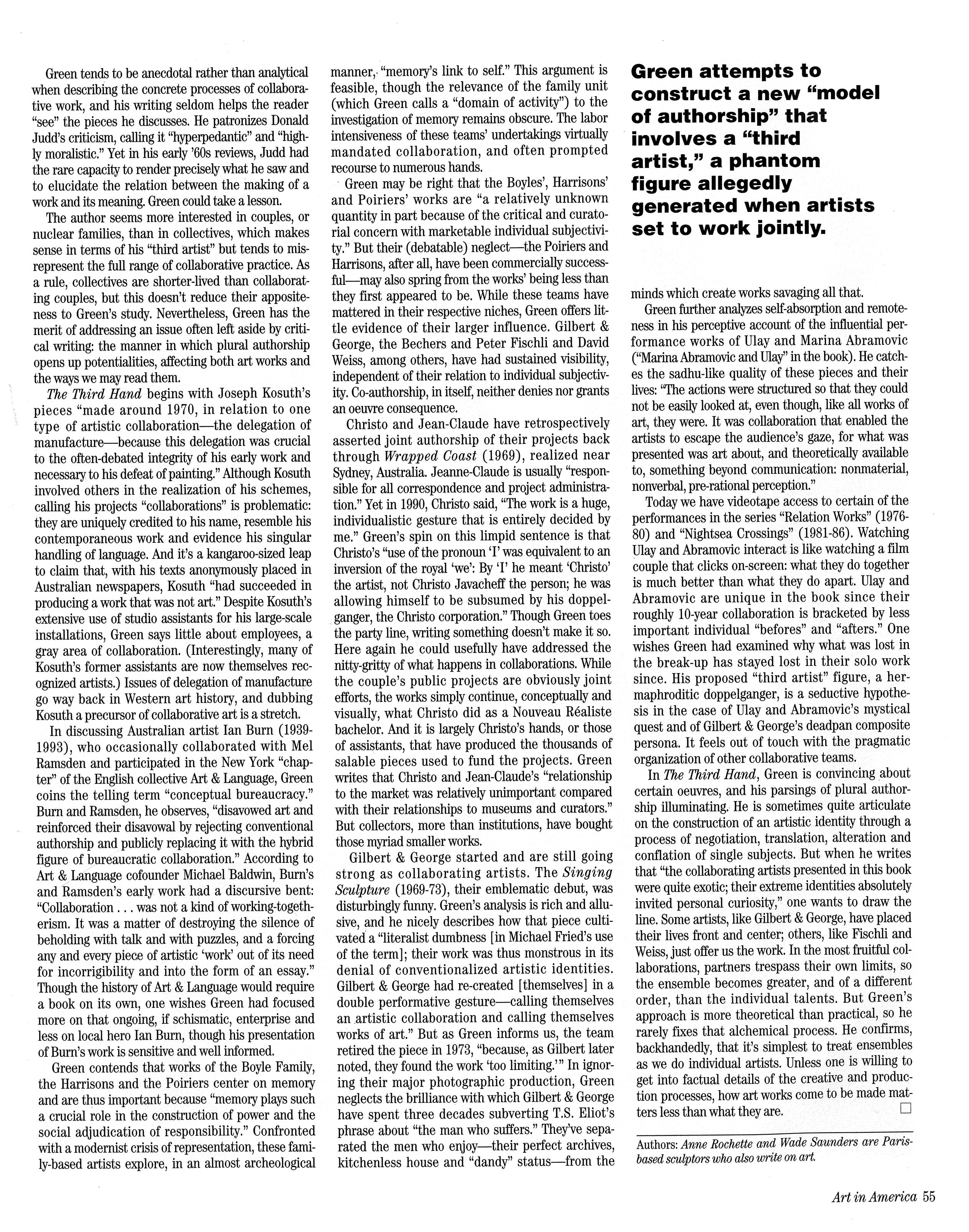 In The Third Hand: Collaboration in Art from Conceptualism to Postmodernism, the Australian artist and critic Charles Green explores collaborative artistic practice with a focus on the late 1960s and early ’70s. It’s a timely topic since plural authorship continues full bore. Pragmatically, collaboration may facilitate projects of baffling complexity, such as the ephemeral installations of Christo and Jeanne-Claude, which would daunt a single author. It is also an essential critical tool for some artists, calling into question traditional notions like self-expression and subjectivity.

Green proposes to investigate joint work “through a very selective history of artistic collaborations after 1968—specifically those that involved unorthodox models of authorship.” He conveys well the richness and variety of ’70s art works linked to Conceptualism and reminds us that even recent art history was far more complicated than we may now remember. He makes impressive claims for collaboration, calling it “a crucial element from modernist to postmodern art” and asserting “the suddenly compelling relevance of alternative 1970s art practices to 1990s conceptualist agendas.” In fact, though, Green doesn’t do much to prove this part of his case, since he chiefly considers ’70s Conceptualism, not ’80s and ’90s postmodernism. Instead he attempts to construct a new “model of authorship” that involves a “third artist,” a phantom figure allegedly generated when artists set about working jointly; hence the book’s title. Green is sensitive and acute on the intricacies of that not-me/not-you and the unexpected ways in which it can propel art works.

The author considers Joseph Kosuth; Ian Burn, Mel Ramsden and Art & Language; the Boyle Family; Anne and Patrick Poirier; Helen Mayer and Newton Harrison; Christo and Jeanne-Claude; Gilbert & George; and Ulay and Marina Abramovic. Some artists are covered in detail, others peremptorily or only inasmuch as they serve Green’s agenda. His discussion of Gilbert & George treats 1969-73, the period of the Singing Sculpture; he ignores the ensuing 25 years of their consequential photographic work. Yet he follows several of his subjects into the late ’80s. He strays widely from collaboration—examining issues of regionalism and recounting Australian culture skirmishes—and at moments the book reads like a compilation of previously published texts. His claim to a de-centered art history is undermined by his choice of artists, who, excepting the Poiriers, are anglophone or have shown in Australia. One regrets that Bernd and Hilla Becher only appear in an aside. The Bechers’ collaboration predates those Green chose, and their influential work dwarfs many of the oeuvres he considers.

Green tends to be anecdotal rather than analytical when describing the concrete processes of collaborative work, and his writing seldom helps the reader “see” the pieces he discusses. He patronizes Donald Judd’s criticism, calling it “hyperpedantic” and “highly moralistic.” Yet in his early ’60s reviews, Judd had the rare capacity to render precisely what he saw and to elucidate the relation between the making of a work and its meaning. Green could take a lesson.

The author seems more interested in couples, or nuclear families, than in collectives, which makes sense in terms of his “third artist” but tends to misrepresent the full range of collaborative practice. As a rule, collectives are shorter-lived than collaborating couples, but this doesn’t reduce their appositeness to Green’s study. Nevertheless, Green has the merit of addressing an issue often left aside by critical writing: the manner in which plural authorship opens up potentialities, affecting both art works and the ways we may read them.

The Third Hand begins with Joseph Kosuth’s pieces “made around 1970, in relation to one type of artistic collaboration—the delegation of manufacture—because this delegation was crucial to the often-debated integrity of his early work and necessary to his defeat of painting.” Although Kosuth involved others in the realization of his schemes, calling his projects “collaborations” is problematic: they are uniquely credited to his name, resemble his contemporaneous work and evidence his singular handling of language. And it’s a kangaroo-sized leap to claim that, with his texts anonymously placed in Australian newspapers, Kosuth “had succeeded in producing a work that was not art.” Despite Kosuth’s extensive use of studio assistants for his large-scale installations, Green says little about employees, a gray area of collaboration. (Interestingly, many of Kosuth’s former assistants are now themselves recognized artists.) Issues of delegation of manufacture go way back in Western art history, and dubbing Kosuth a precursor of collaborative art is a stretch.

In discussing Australian artist Ian Burn (1939-1993), who occasionally collaborated with Mel Ramsden and participated in the New York “chapter” of the English collective Art & Language, Green coins the telling term “conceptual bureaucracy.” Burn and Ramsden, he observes, “disavowed art and reinforced their disavowal by rejecting conventional authorship and publicly replacing it with the hybrid figure of bureaucratic collaboration.” According to Art & Language cofounder Michael Baldwin, Burn’s and Ramsden’s early work had a discursive bent: “Collaboration … was not a kind of working-togetherism. It was a matter of destroying the silence of beholding with talk and with puzzles, and a forcing any and every piece of artistic ‘work’ out of its need for incorrigibility and into the form of an essay.” Though the history of Art & Language would require a book on its own, one wishes Green had focused more on that ongoing, if schismatic, enterprise and less on local hero Ian Burn, though his presentation of Burn’s work is sensitive and well informed.

Green contends that works of the Boyle Family, the Harrisons and the Poiriers center on memory and are thus important because “memory plays such a crucial role in the construction of power and the social adjudication of responsibility.” Confronted with a modernist crisis of representation, these family-based artists explore, in an almost archeological manner, “memory’s link to self.” This argument is feasible, though the relevance of the family unit (which Green calls a “domain of activity”) to the investigation of memory remains obscure. The labor intensiveness of these teams’ undertakings virtually mandated collaboration, and often prompted recourse to numerous hands.

Green may be right that the Boyles’, Harrisons’ and Poiriers’ works are “a relatively unknown quantity in part because of the critical and curatorial concern with marketable individual subjectivity.” But their (debatable) neglect—the Poiriers and Harrisons, after all, have been commercially successful—may also spring from the works being less than they first appeared to be. While these teams have mattered in their respective niches, Green offers little evidence of their larger influence. Gilbert & George, the Bechers and Peter Fischli and David Weiss, among others, have had sustained visibility, independent of their relation to individual subjectivity. Co-authorship, in itself, neither denies nor grants an oeuvre consequence.

Christo and Jean-Claude have retrospectively asserted joint authorship of their projects back through Wrapped Coast (1969), realized near Sydney, Australia. Jeanne-Claude is usually “responsible for all correspondence and project administration.” Yet in 1990, Christo said, “The work is a huge, individualistic gesture that is entirely decided by me.” Green’s spin on this limpid sentence is that Christo’s “use of the pronoun ‘I’ was equivalent to an inversion of the royal ‘we’: By ‘I’ he meant ‘Christo’ the artist, not Christo Javacheff the person; he was allowing himself to be subsumed by his doppelganger, the Christo corporation.” Though Green toes the party line, writing something doesn’t make it so. Here again he could usefully have addressed the nitty-gritty of what happens in collaborations. While the couple’s public projects are obviously joint efforts, the works simply continue, conceptually and visually, what Christo did as a Nouveau Réaliste bachelor. And it is largely Christo’s hands, or those of assistants, that have produced the thousands of salable pieces used to fund the projects. Green writes that Christo and Jean-Claude’s “relationship to the market was relatively unimportant compared with their relationships to museums and curators.” But collectors, more than institutions, have bought those myriad smaller works.

Gilbert & George started and are still going strong as collaborating artists. The Singing Sculpture (1969-73), their emblematic debut, was disturbingly funny. Green’s analysis is rich and allusive, and he nicely describes how that piece cultivated a “literalist dumbness [in Michael Fried’s use of the term]; their work was thus monstrous in its denial of conventionalized artistic identities. Gilbert & George had re-created [themselves] in a double performative gesture—calling themselves an artistic collaboration and calling themselves works of art.” But as Green informs us, the team retired the piece in 1973, “because, as Gilbert later noted, they found the work ‘too limiting.’” In ignoring their major photographic production, Green neglects the brilliance with which Gilbert & George have spent three decades subverting T.S. Eliot’s phrase about “the man who suffers.” They’ve separated the men who enjoy—their perfect archives, kitchenless house and “dandy” status—from the minds which create works savaging all that.

Green further analyzes self-absorption and remoteness in his perceptive account of the influential performance works of Ulay and Marina Abramovic (“Marina Abramovic and Ulay” in the book). He catches the sadhu-like quality of these pieces and their lives: “The actions were structured so that they could not be easily looked at, even though, like all works of art, they were. It was collaboration that enabled the artists to escape the audience’s gaze, for what was presented was art about, and theoretically available to, something beyond communication: nonmaterial, nonverbal, pre-rational perception.”

Today we have videotape access to certain of the performances in the series “Relation Works” (1976- 80) and “Nightsea Crossings” (1981-86). Watching Ulay and Abramovic interact is like watching a film couple that clicks on-screen: what they do together is much better than what they do apart. Ulay and Abramovic are unique in the book since their roughly 10-year collaboration is bracketed by less important individual “befores” and “afters.” One wishes Green had examined why what was lost in the break-up has stayed lost in their solo work since. His proposed “third artist” figure, a hermaphroditic doppelganger, is a seductive hypothesis in the case of Ulay and Abramovic’s mystical quest and of Gilbert & George’s deadpan composite persona. It feels out of touch with the pragmatic organization of other collaborative teams.

In The Third Hand, Green is convincing about certain oeuvres, and his parsings of plural authorship illuminating. He is sometimes quite articulate on the construction of an artistic identity through a process of negotiation, translation, alteration and conflation of single subjects. But when he writes that “the collaborating artists presented in this book were quite exotic; their extreme identities absolutely invited personal curiosity,” one wants to draw the line. Some artists, like Gilbert & George, have placed their lives front and center; others, like Fischli and Weiss, just offer us the work. In the most fruitful collaborations, partners trespass their own limits, so the ensemble becomes greater, and of a different order, than the individual talents. But Green’s approach is more theoretical than practical, so he rarely fixes that alchemical process. He confirms, backhandedly, that it’s simplest to treat ensembles as we do individual artists. Unless one is willing to get into factual details of the creative and production processes, how art works come to be made matters less than what they are.