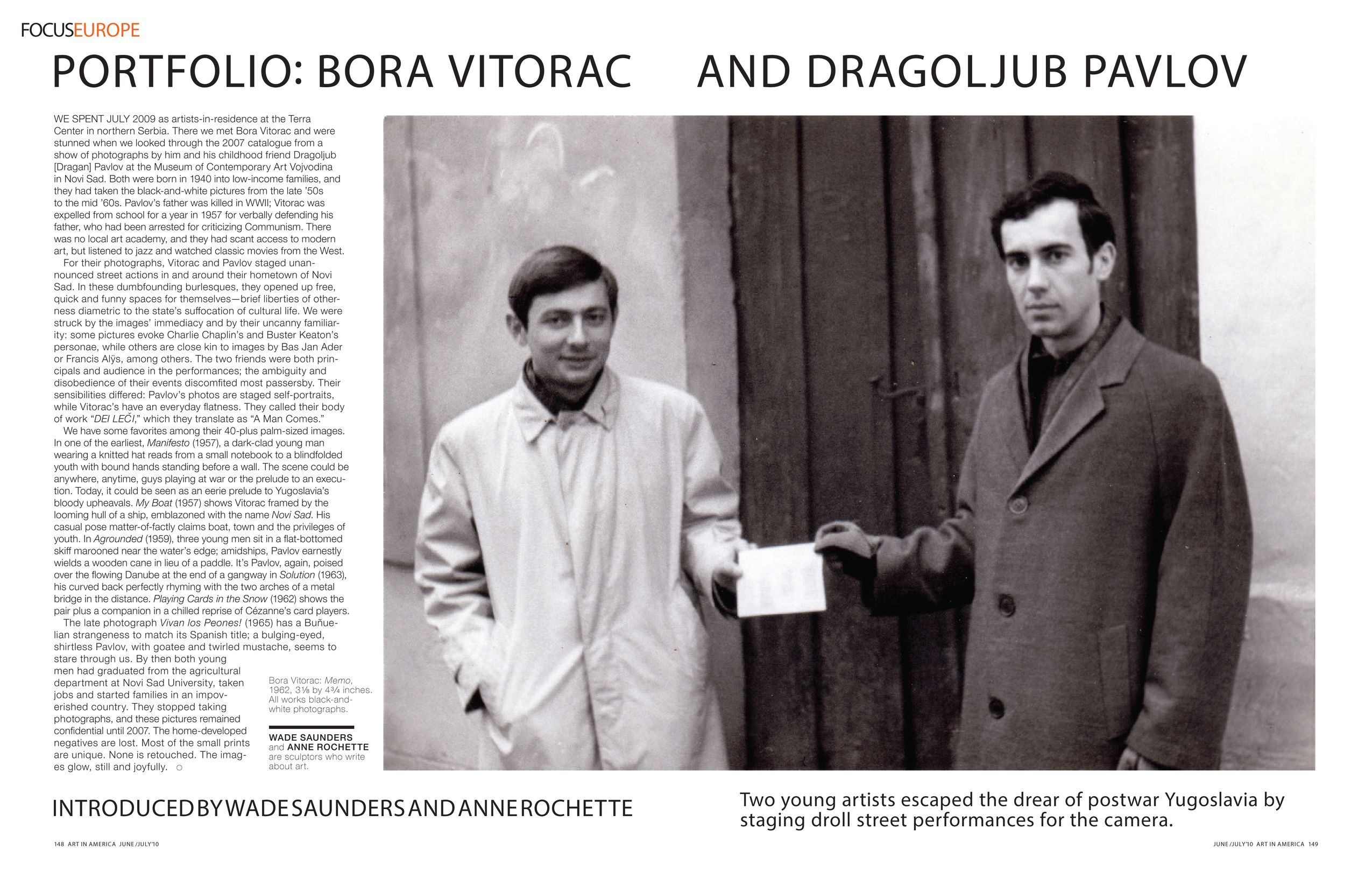 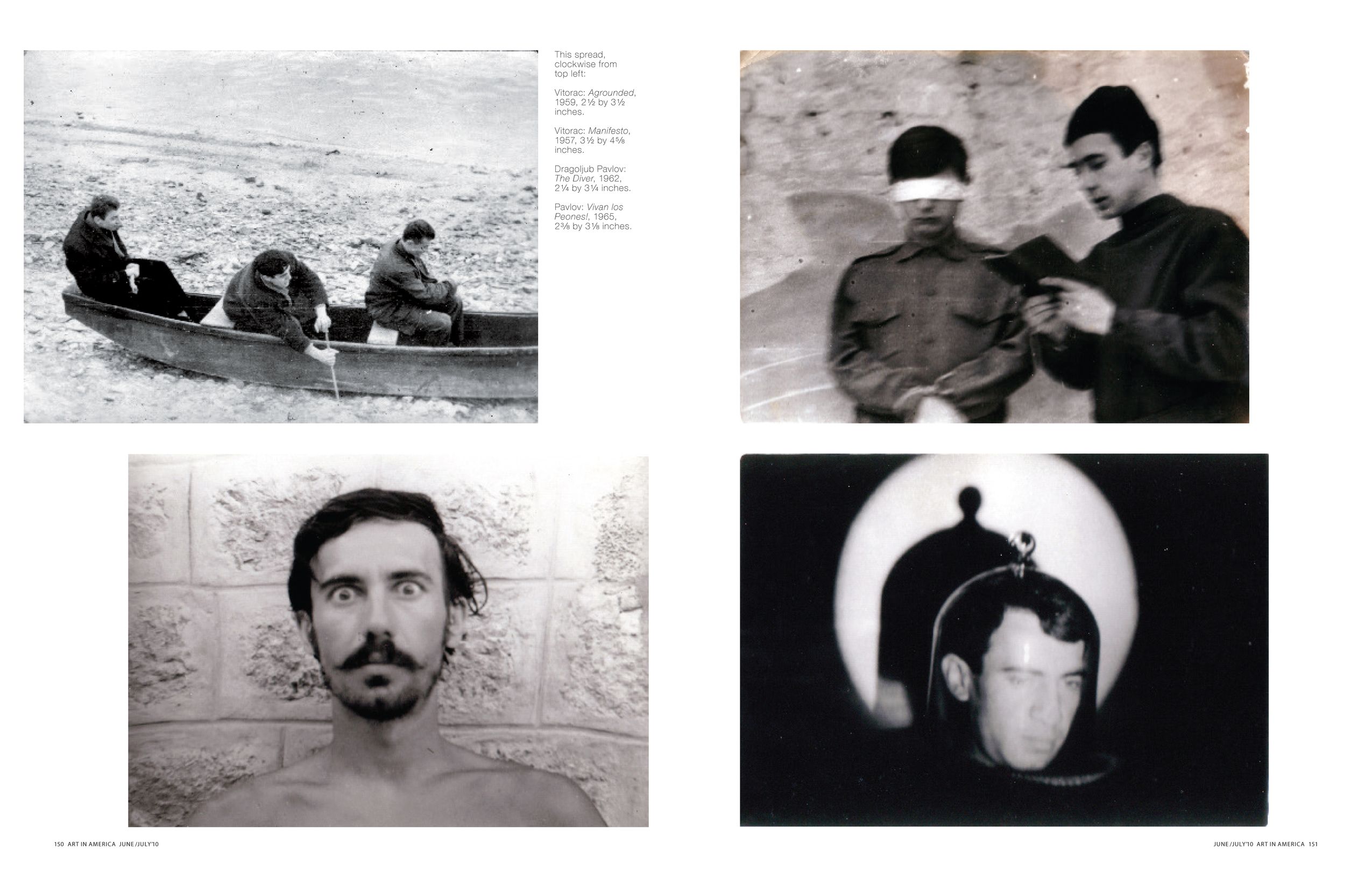 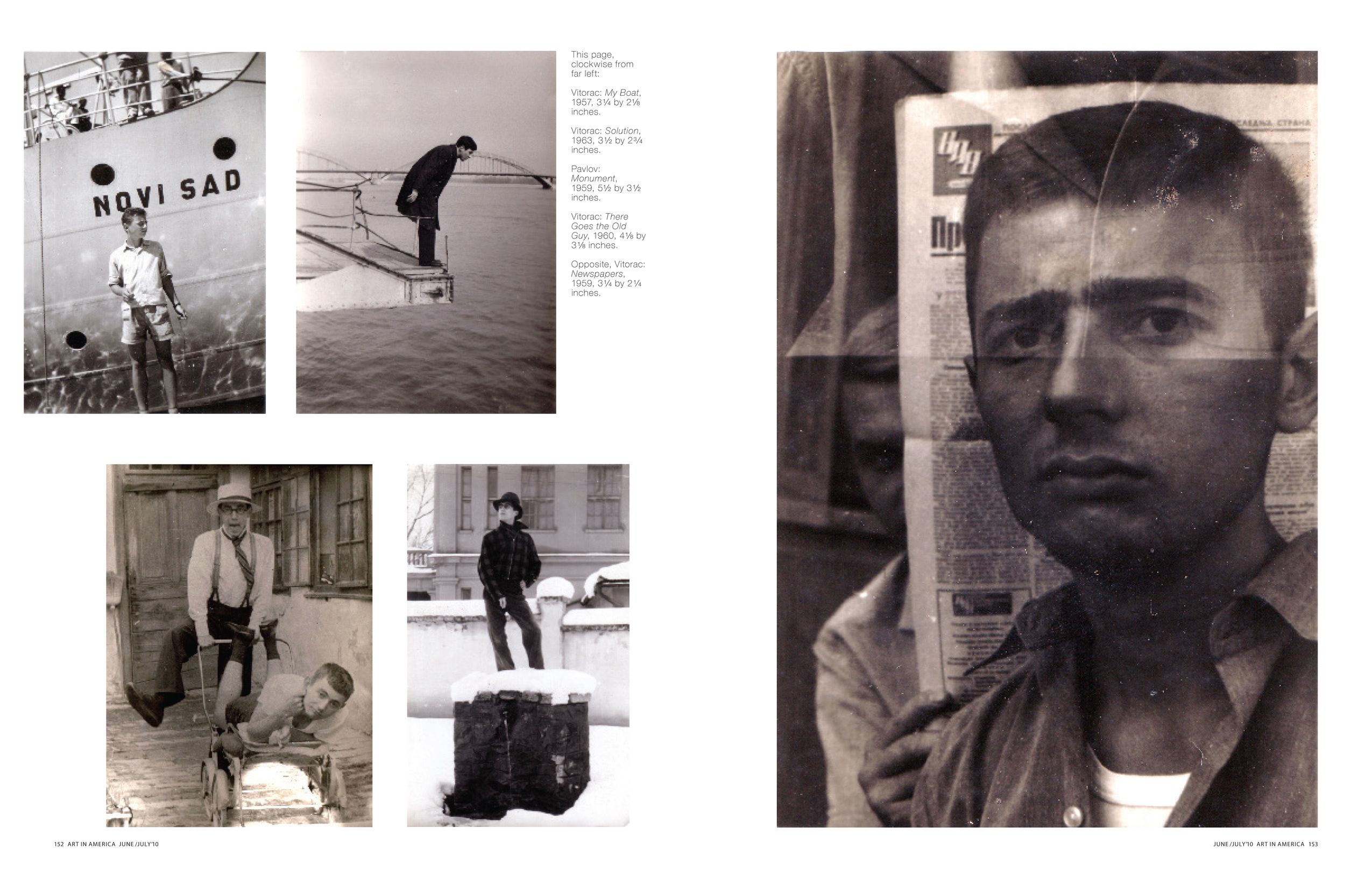 We spent July 2009 as artists-in-residence at the Terra Center in northern Serbia. There we met Bora Vitorac and were stunned when we looked through the 2007 catalogue from a show of photographs by him and his childhood friend Dragoljub [Dragan] Pavlov at the Museum of Contemporary Art Vojvodina in Novi Sad. Both were born in 1940 into low-income families, and they had taken the black-and-white pictures from the late ’50s to the mid ’60s. Pavlov’s father was killed in WWII; Vitorac was expelled from school for a year in 1957 for verbally defending his father, who had been arrested for criticizing Communism. There was no local art academy, and they had scant access to modern art, but listened to jazz and watched classic movies from the West.

For their photographs, Vitorac and Pavlov staged unannounced street actions in and around their hometown of Novi Sad. In these dumbfounding burlesques, they opened up free, quick and funny spaces for themselves—brief liberties of otherness diametric to the state’s suffocation of cultural life. We were struck by the images’ immediacy and by their uncanny familiarity: some pictures evoke Charlie Chaplin’s and Buster Keaton’s personae, while others are close kin to images by Bas Jan Ader or Francis Alÿs, among others. The two friends were both principals and audience in the performances; the ambiguity and disobedience of their events discomfited most passersby. Their sensibilities differed: Pavlov’s photos are staged self-portraits, while Vitorac’s have an everyday flatness. They called their body of work “DEI LECI,” which they translate as “A Man Comes.”

We have some favorites among their 40-plus palm-sized images. In one of the earliest, Manifesto (1957), a dark-clad young man wearing a knitted hat reads from a small notebook to a blindfolded youth with bound hands standing before a wall. The scene could be anywhere, anytime, guys playing at war or the prelude to an execution. Today, it could be seen as an eerie prelude to Yugoslavia’s bloody upheavals. My Boat (1957) shows Vitorac framed by the looming hull of a ship, emblazoned with the name Novi Sad. His casual pose matter-of-factly claims boat, town and the privileges of youth. In Agrounded (1959), three young men sit in a flat-bottomed skiff marooned near the water’s edge; amidships, Pavlov earnestly wields a wooden cane in lieu of a paddle. It’s Pavlov, again, poised over the flowing Danube at the end of a gangway in Solution (1963), his curved back perfectly rhyming with the two arches of a metal bridge in the distance. Playing Cards in the Snow (1962) shows the pair plus a companion in a chilled reprise of Cezanne’s card players.

The late photograph Vivan los Peones! (1965) has a Bunuelian strangeness to match its Spanish title; a bulging-eyed, shirtless Pavlov, with goatee and twirled mustache, seems to stare through us. By then both young men had graduated from the agricultural department at Novi Sad University, taken jobs and started families in an impoverished country. They stopped taking photographs, and these pictures remained confidential until 2007. The home-developed negatives are lost. Most of the small prints are unique. None is retouched. The images glow, still and joyfully.