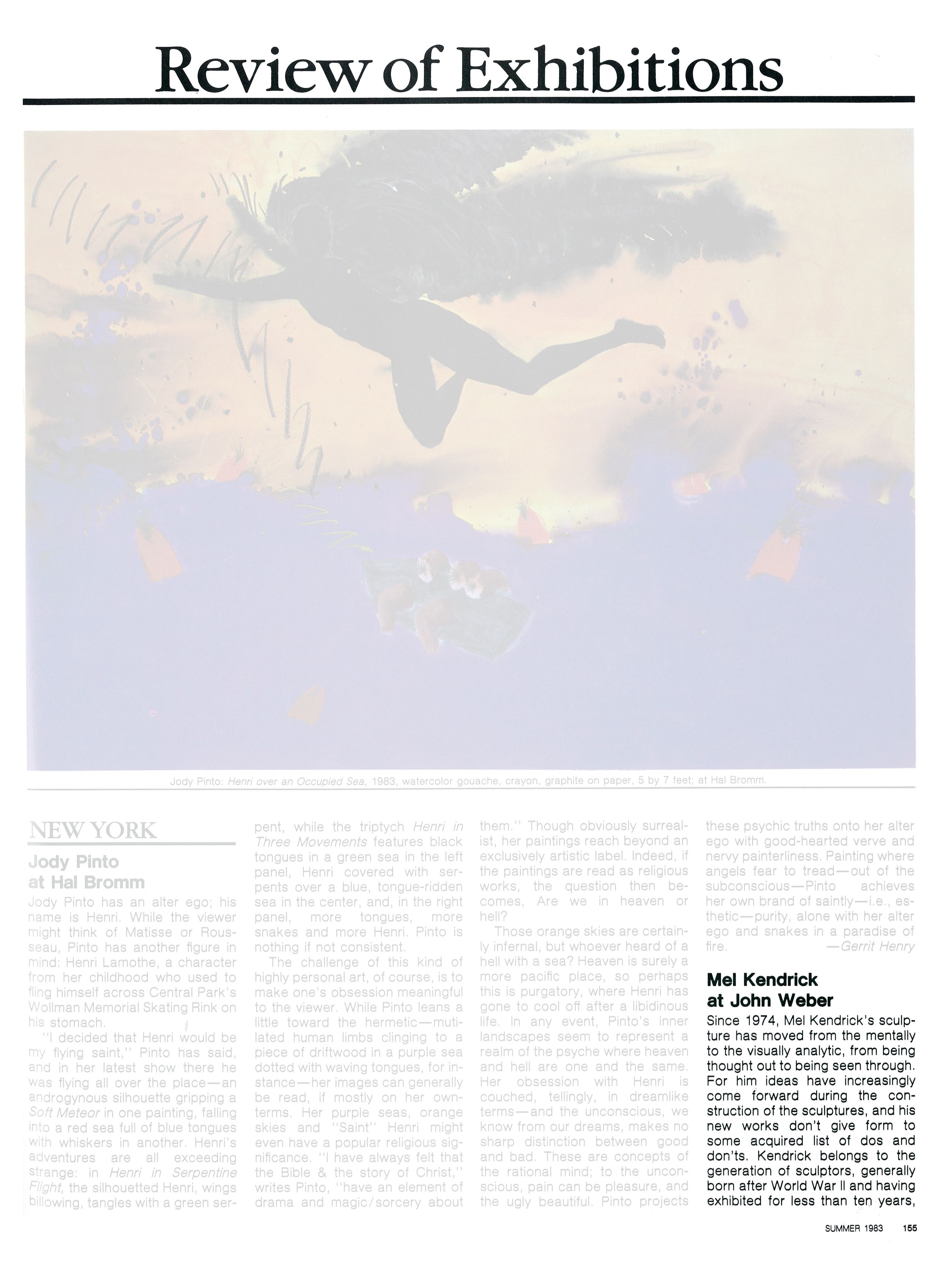 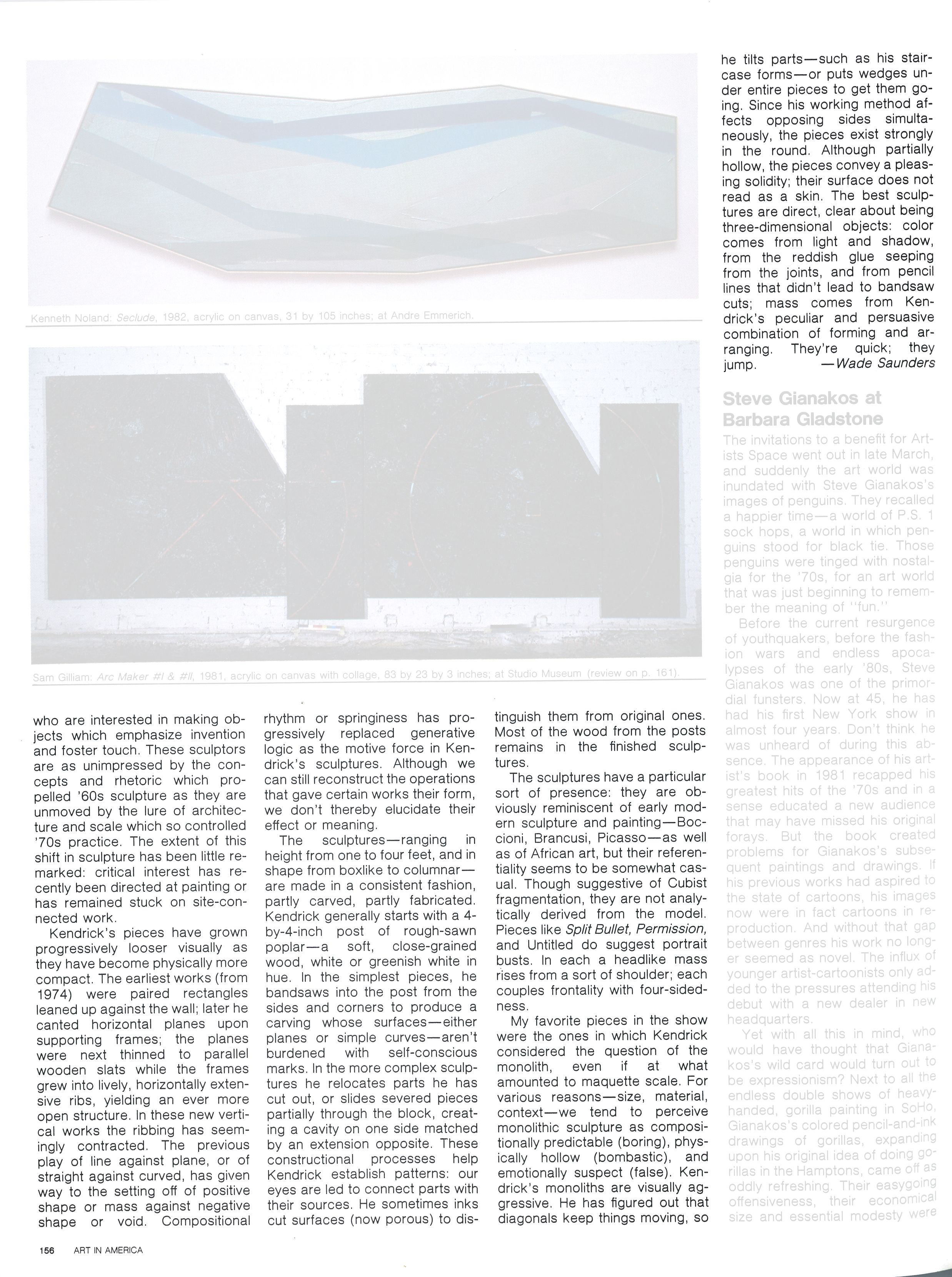 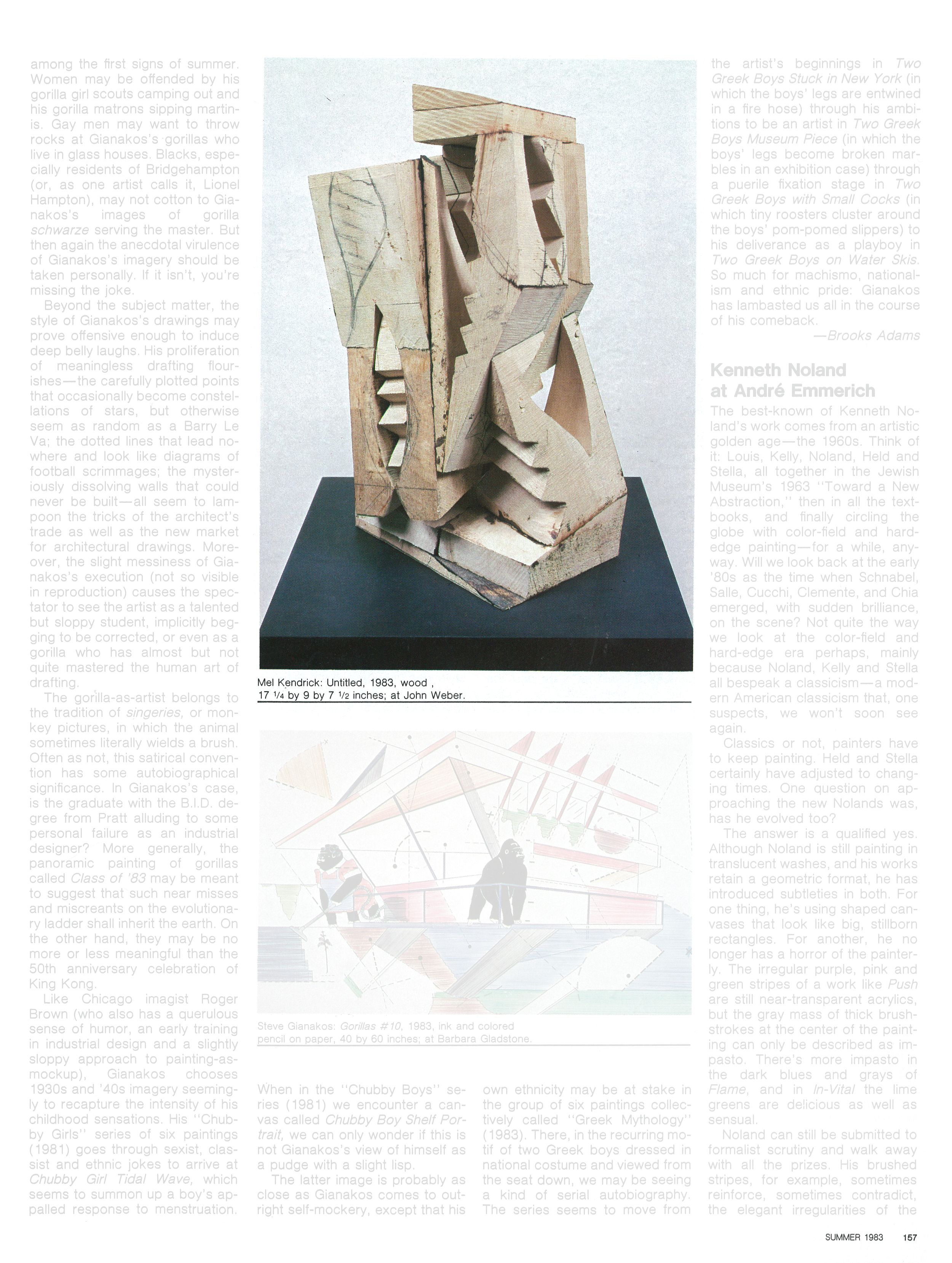 Since 1974, Mel Kendrick’s sculpture has moved from the mentally to the visually analytic, from being thought out to being seen through. For him ideas have increasingly come forward during the construction of the sculptures, and his new works don’t give form to some acquired list of dos and don’ts. Kendrick belongs to the generation of sculptors, generally born after World War II and having exhibited for less than ten years, who are interested in making objects which emphasize invention and foster touch. These sculptors are as unimpressed by the concepts and rhetoric which propelled ’60s sculpture as they are unmoved by the lure of architecture and scale which so controlled ’70s practice. The extent of this shift in sculpture has been little remarked: critical interest has recently been directed at painting or has remained stuck on site-connected work.

Kendrick’s pieces have grown progressively looser visually as they have become physically more compact. The earliest works (from 1974) were paired rectangles leaned up against the wall: later he canted horizontal planes upon supporting frames; the planes were next thinned to parallel wooden slats while the frames grew into lively, horizontally extensive ribs, yielding an ever more open structure. In these new vertical works the ribbing has seemingly contracted The previous play of line against plane, or of straight against curved, has given way to the setting off of positive shape or mass against negative shape or void. Compositional rhythm or springiness has progressively replaced generative logic as the motive force in Kendrick’s sculptures. Although we can still reconstruct the operations that gave certain works their form, we don’t thereby elucidate their effect or meaning.

The sculptures—ranging in height from one to four feet, and in shape from boxlike to columnar—are made in a consistent fashion, partly carved, partly fabricated. Kendrick generally starts with a 4-by-4-inch post of rough-sawn poplar—a soft, close-grained wood, white or greenish white in hue. In the simplest pieces, he bandsaws into the post from the sides and corners to produce a carving whose surfaces—either planes or simple curves—aren’t burdened with self-conscious marks. In the more complex sculptures he relocates parts he has cut out, or slides severed pieces partially through the block, creating a cavity on one side matched by an extension opposite. These constructional processes help Kendrick establish patterns: our eyes are led to connect parts with their sources. He sometimes inks cut surfaces (now porous) to distinguish them from original ones. Most of the wood from the posts remains in the finished sculptures.

The sculptures have a particular sort of presence: they are obviously reminiscent of early modern sculpture and painting—Boccioni, Brancusi, Picasso—as well as of African art, but their referentiality seems to be somewhat casual. Though suggestive of Cubist fragmentation, they are not analytically derived from the model. Pieces like Split Bullet, Permission, and Untitled do suggest portrait busts. In each a headlike mass rises from a sort of shoulder; each couples frontality with four-sidedness.

My favorite pieces in the show were the ones in which Kendrick considered the question of the monolith, even if at what amounted to maquette scale. For various reasons—size, material, context—we tend to perceive monolithic sculpture as compositionally predictable (boring), physically hollow (bombastic), and emotionally suspect (false). Kendrick’s monoliths are visually aggressive. He has figured out that diagonals keep things moving, so he tilts parts—such as his staircase forms—or puts wedges under entire pieces to get them going. Since his working method affects opposing sides simultaneously, the pieces exist strongly in the round. Although partially hollow, the pieces convey a pleasing solidity; their surface does not read as a skin. The best sculptures are direct, clear about being three-dimensional objects: color comes from light and shadow, from the reddish glue seeping from the joints, and from pencil lines that didn’t lead to bandsaw cuts; mass comes from Kendrick’s peculiar and persuasive combination of forming and arranging. They’re quick; they jump.