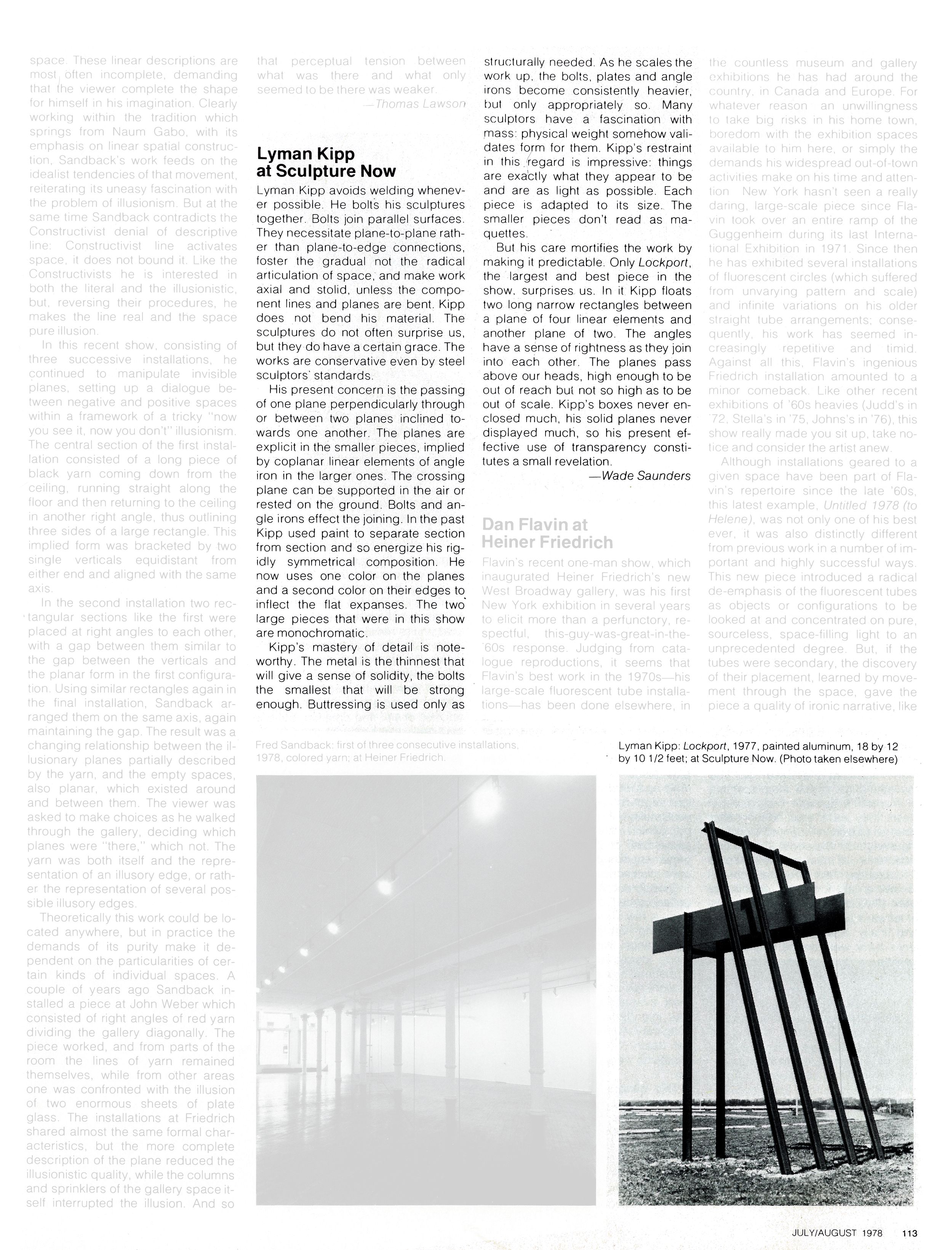 Lyman Kipp avoids welding whenever possible. He bolts his sculptures together. Bolts join parallel surfaces. They necessitate plane-to-plane rather than plane-to-edge connections, foster the gradual not the radical articulation of space, and make work axial and stolid, unless the component lines and planes are bent. Kipp does not bend his material. The sculptures do not often surprise us, but they do have a certain grace. The works are conservative even by steel sculptors’ standards.

His present concern is the passing of one plane perpendicularly through or between two planes inclined towards one another. The planes are explicit in the smaller pieces, implied by coplanar linear elements of angle iron in the larger ones. The crossing plane can be supported in the air or rested on the ground. Bolts and angle irons effect the joining. In the past Kipp used paint to separate section from section and so energize his rigidly symmetrical composition. He now uses one color on the planes and a second color on their edges to inflect the flat expanses. The two large pieces that were in this show are monochromatic.

Kipp’s mastery of detail is noteworthy. The metal is the thinnest that will give a sense of solidity, the bolts the smallest that will be strong enough. Buttressing is used only as structurally needed. As he scales the work up, the bolts, plates and angle irons become consistently heavier, but only appropriately so. Many sculptors have a fascination with mass; physical weight somehow validates form for them. Kipp’s restraint in this regard is impressive: things are exactly what they appear to be and are as light as possible. Each piece is adapted to its size. The smaller pieces don’t read as maquettes.

But his care mortifies the work by making it predictable. Only Lockport, the largest and best piece in the show, surprises us. In it Kipp floats two long narrow rectangles between a plane of four linear elements and another plane of two. The angles have a sense of rightness as they join into each other. The planes pass above our heads, high enough to be out of reach but not so high as to be out of scale. Kipp’s boxes never enclosed much, his solid planes never displayed much, so his present effective use of transparency constitutes a small revelation.