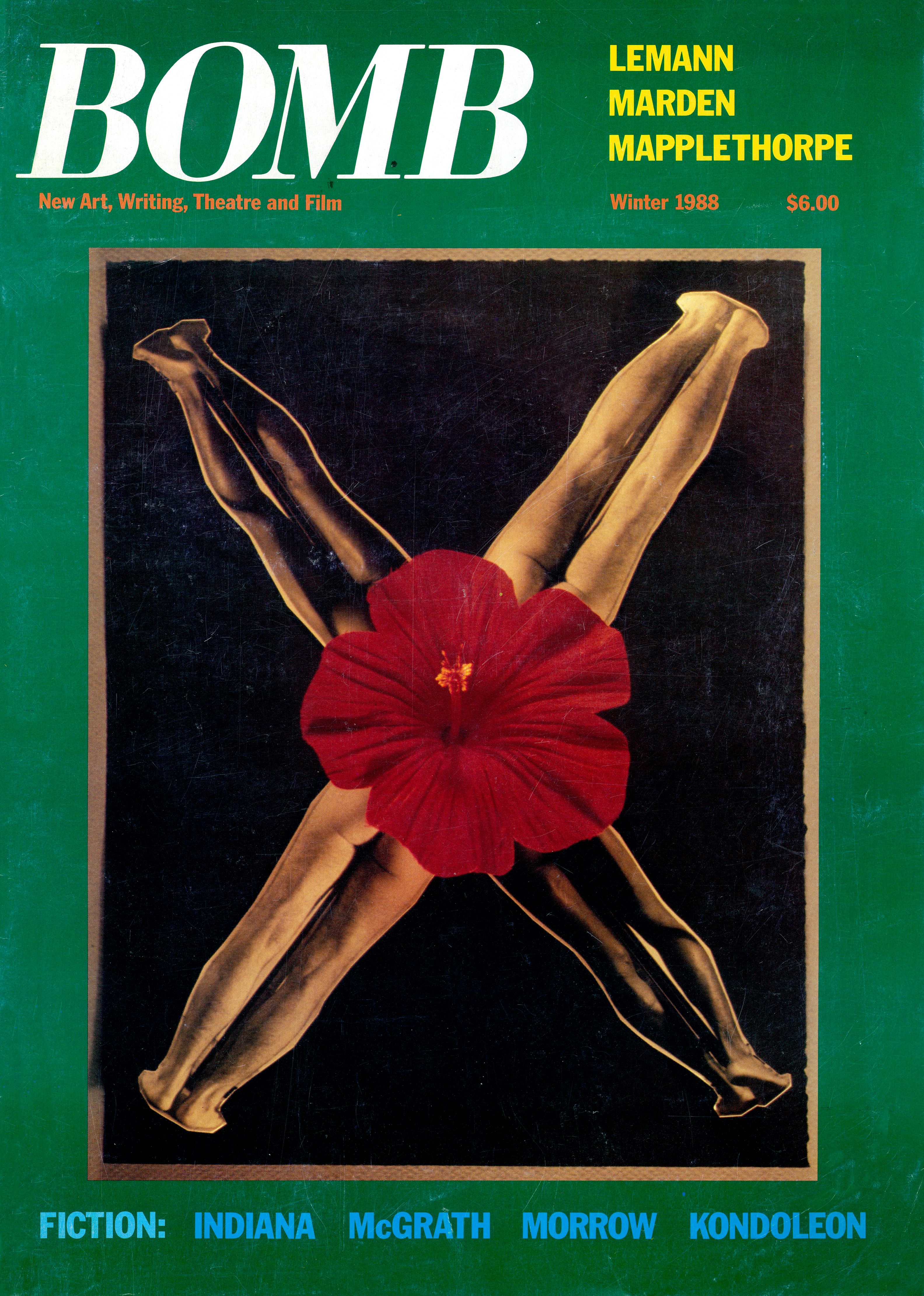 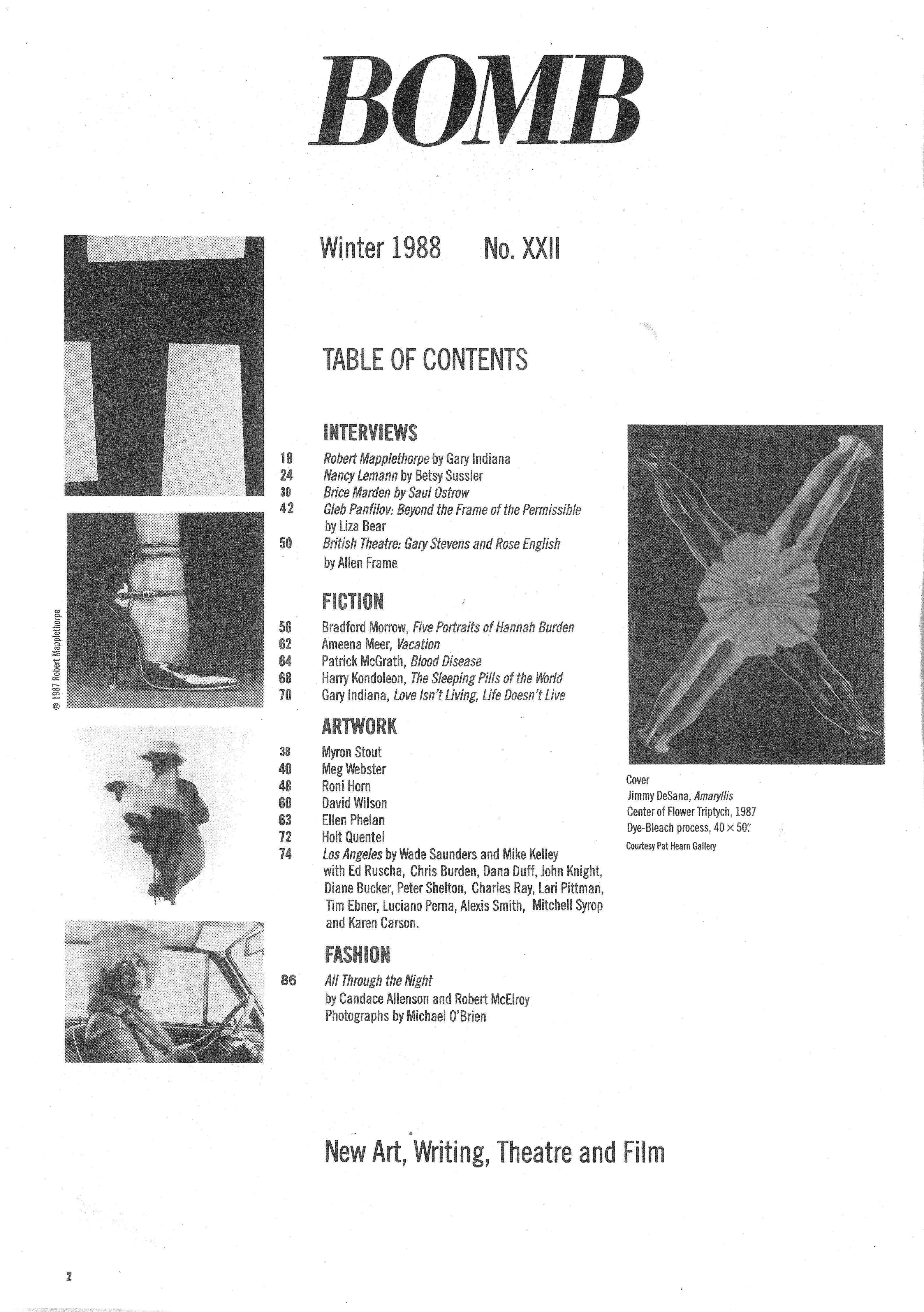 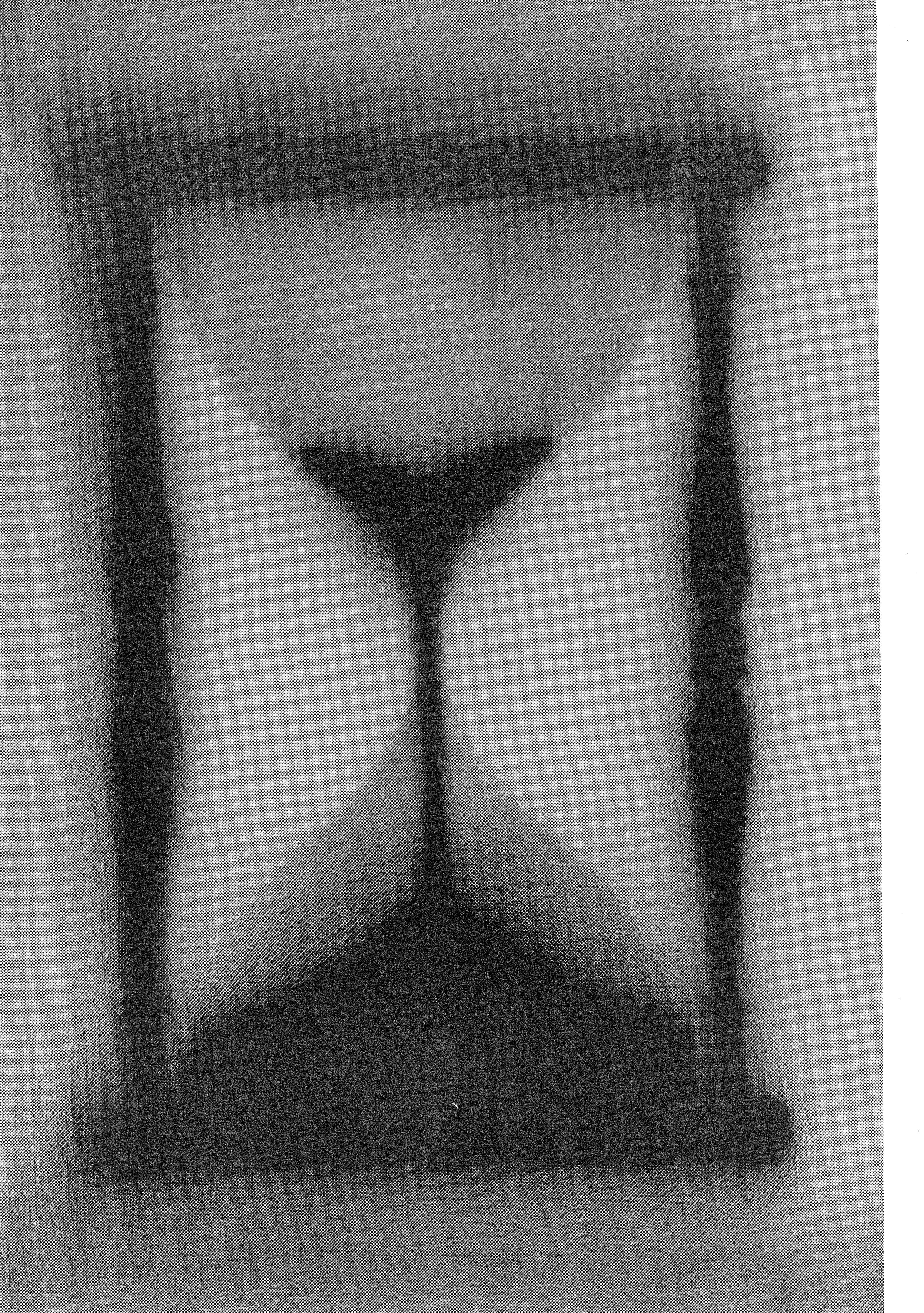 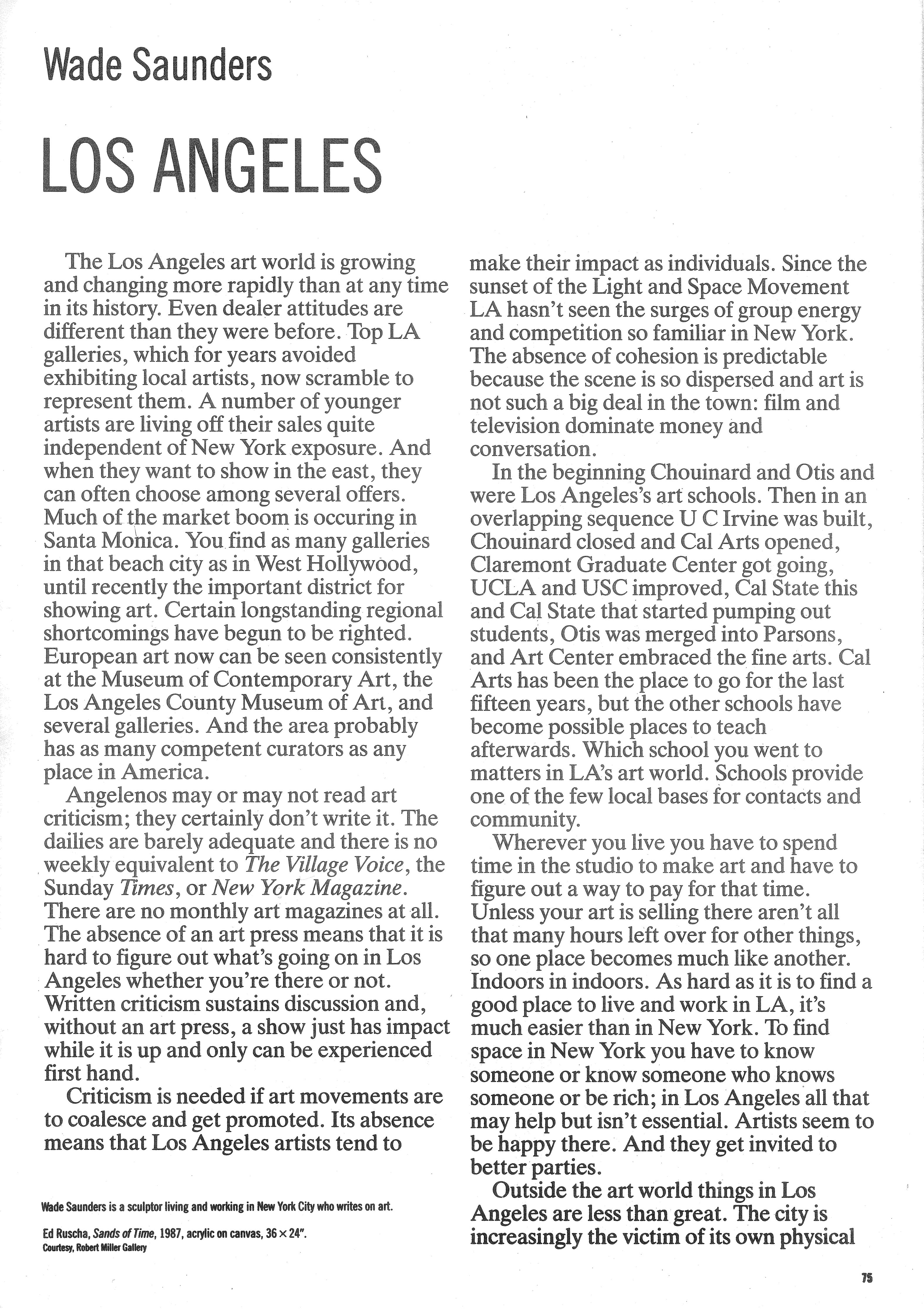 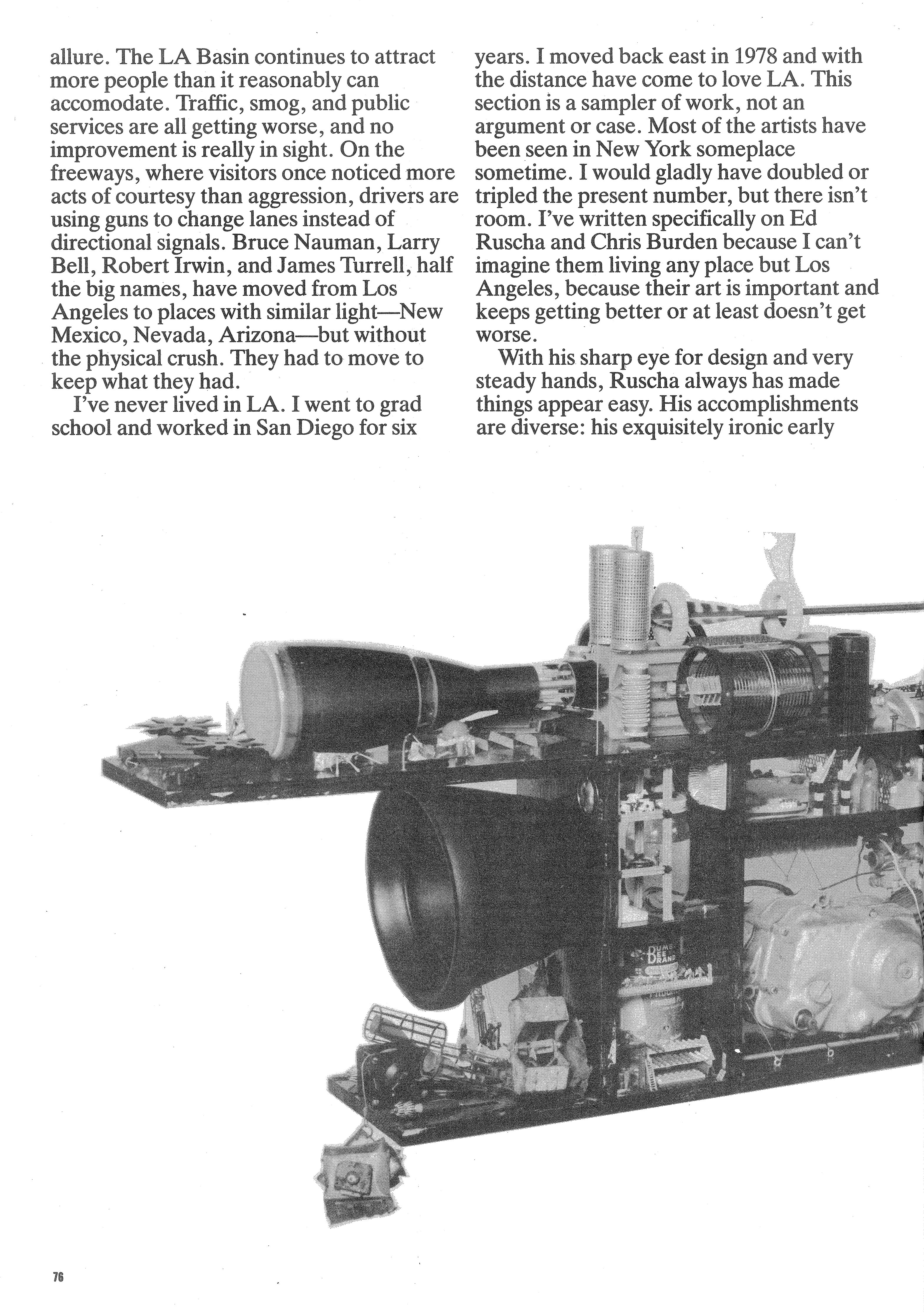 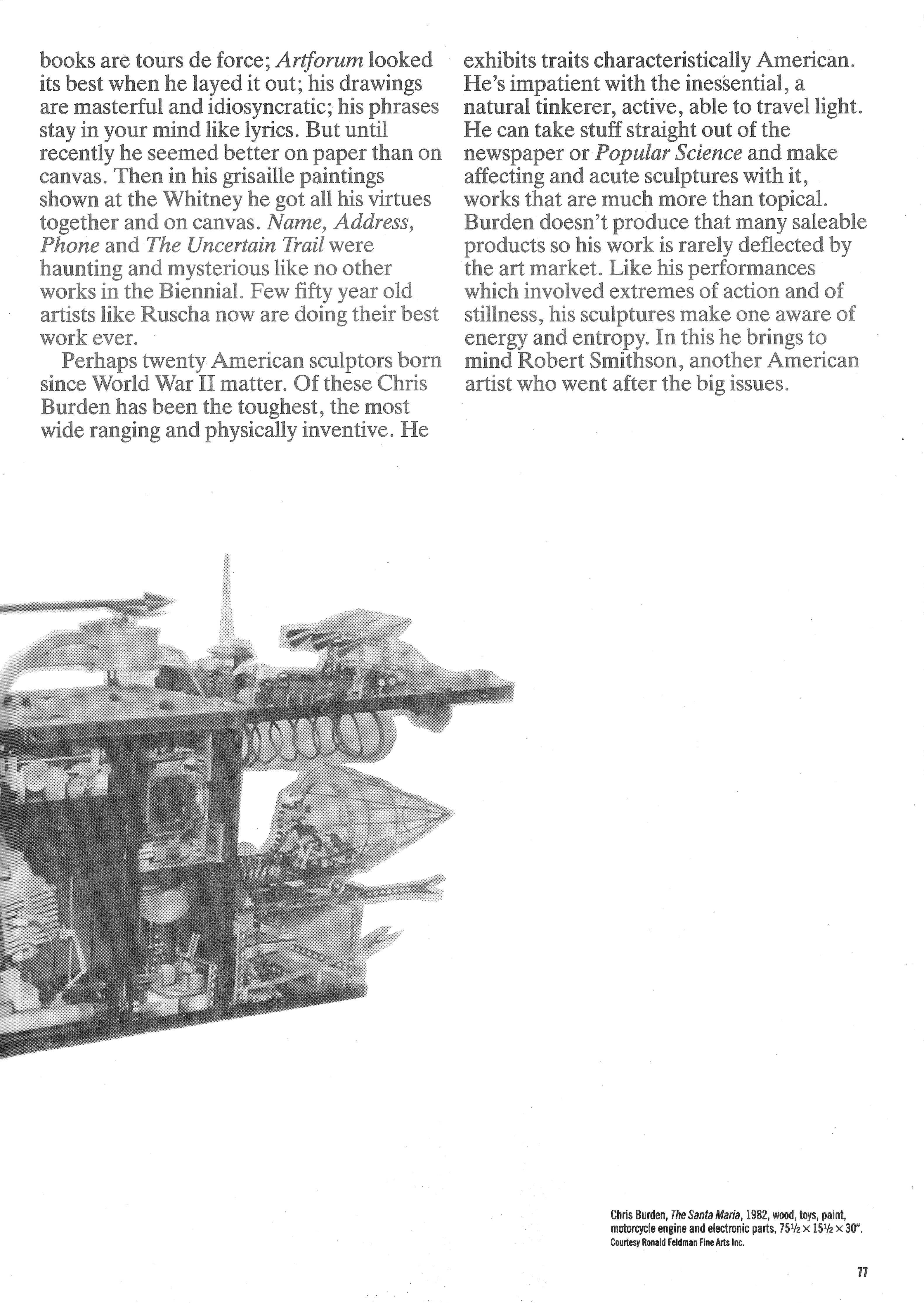 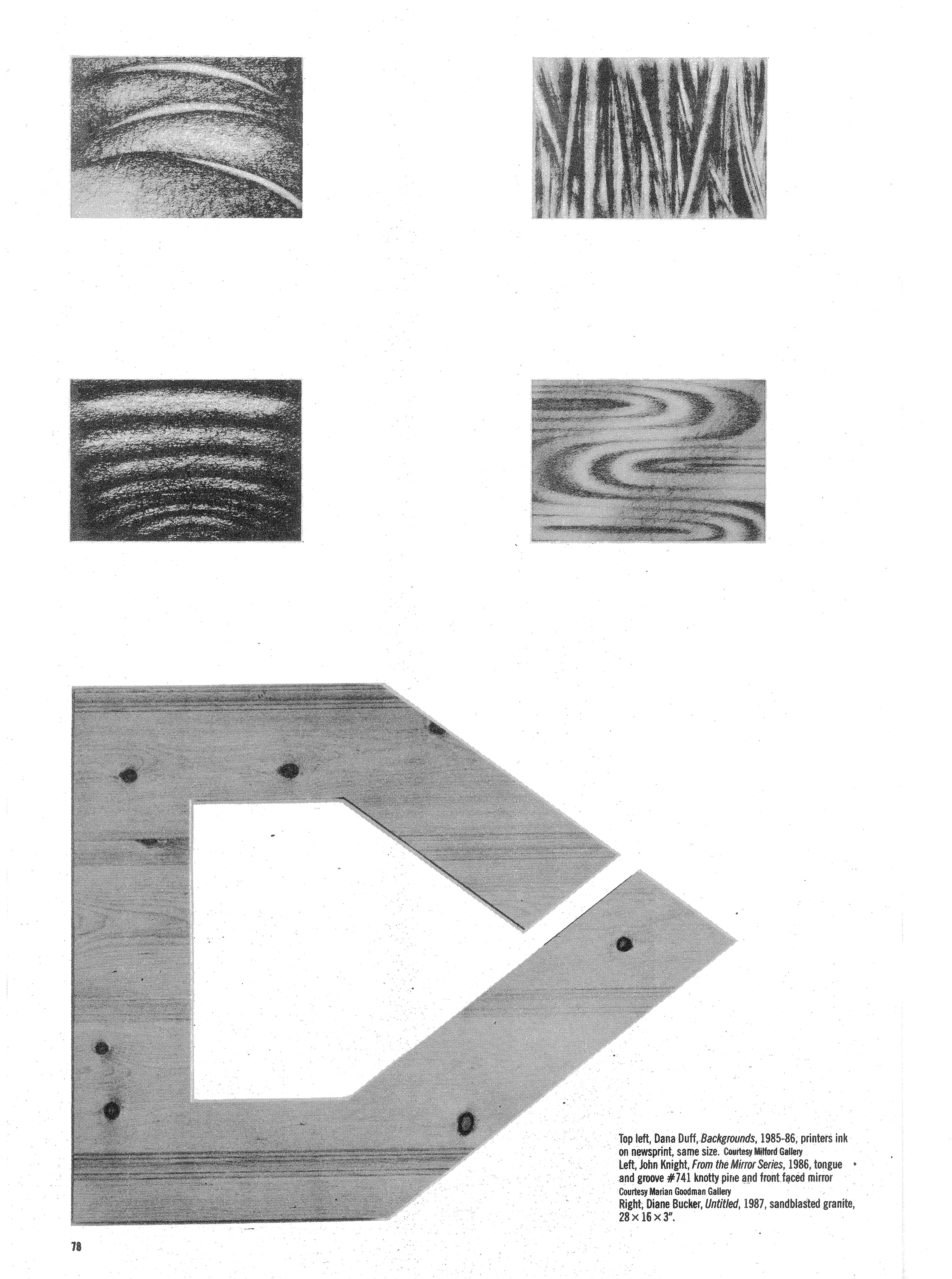 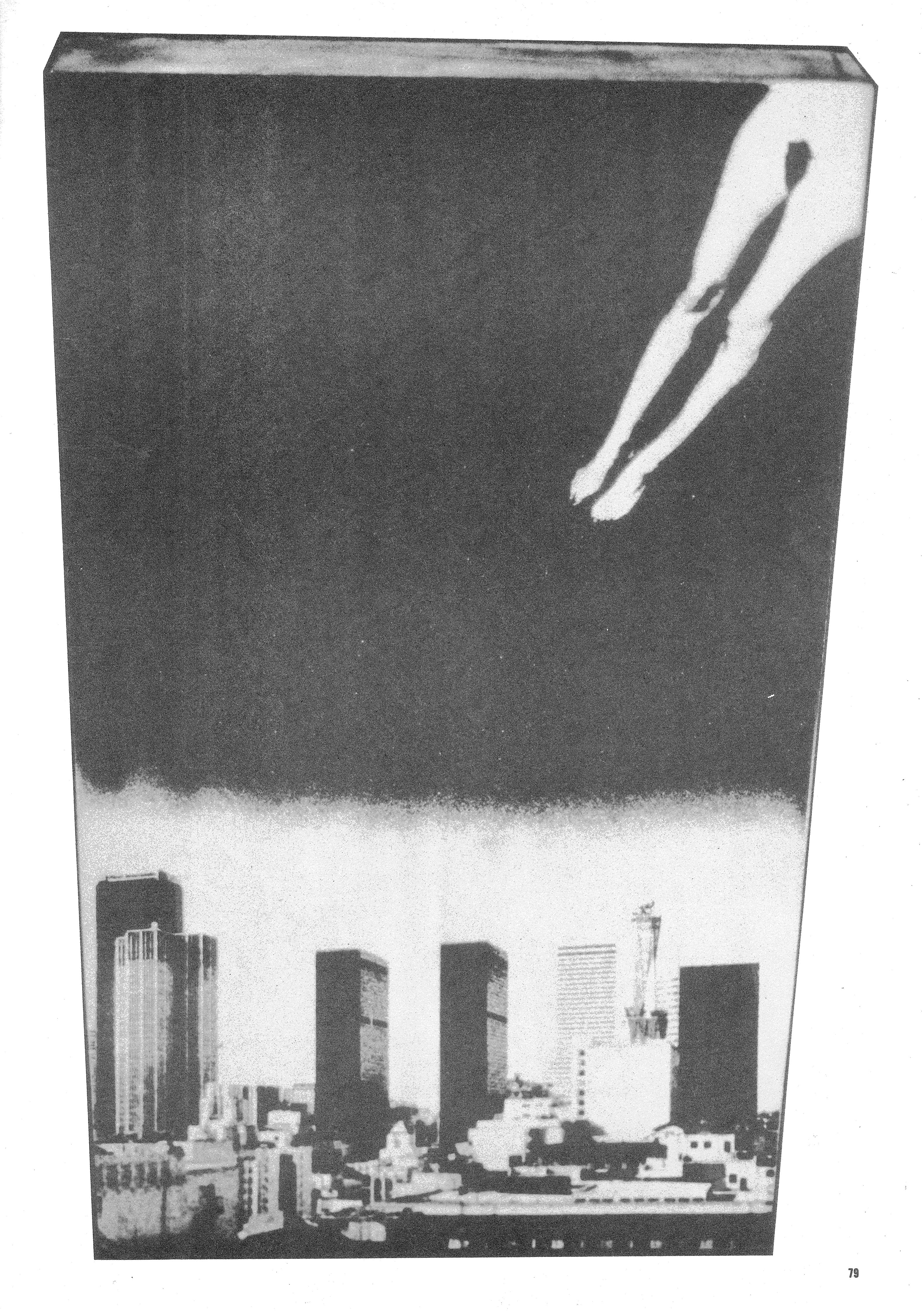 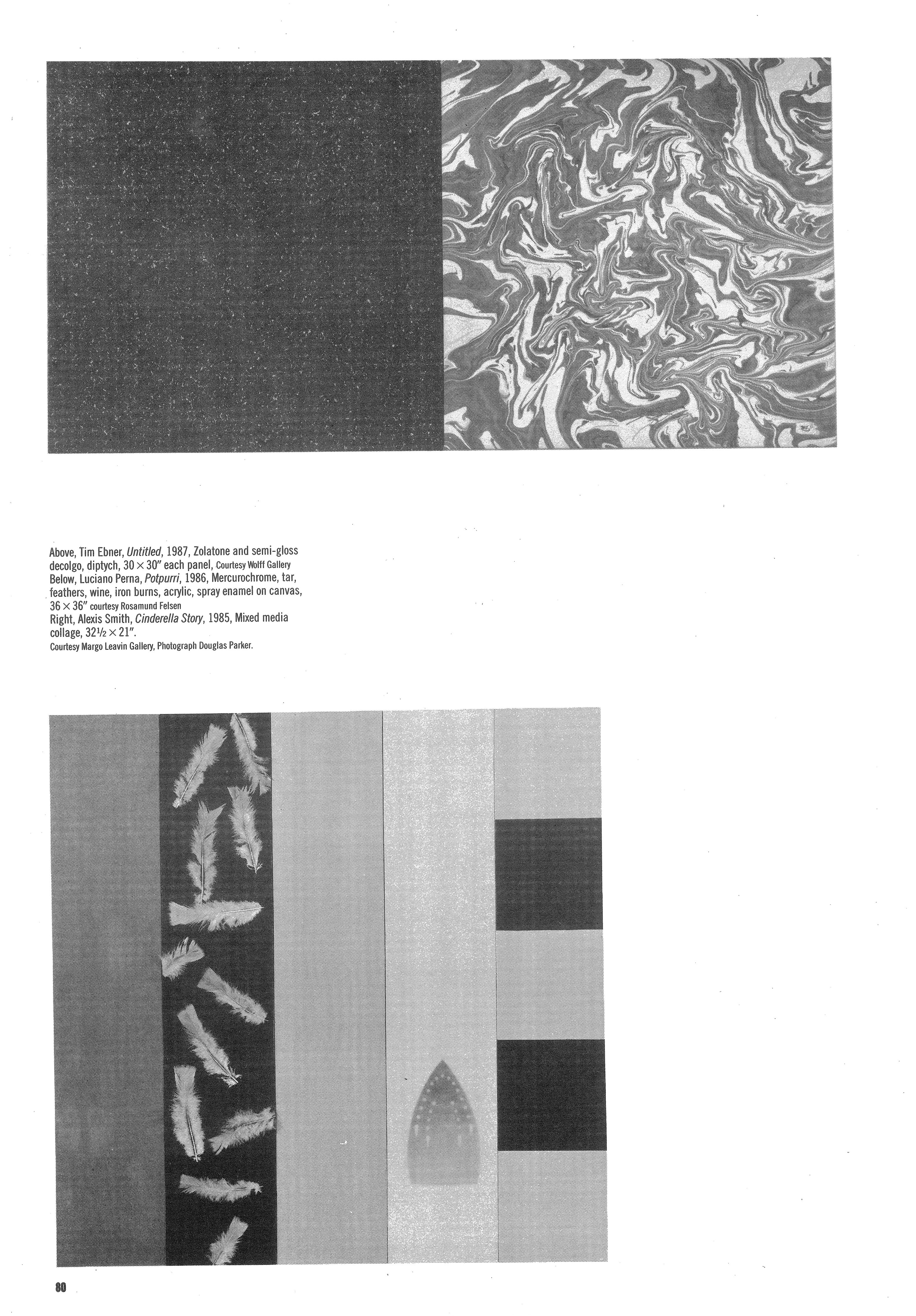 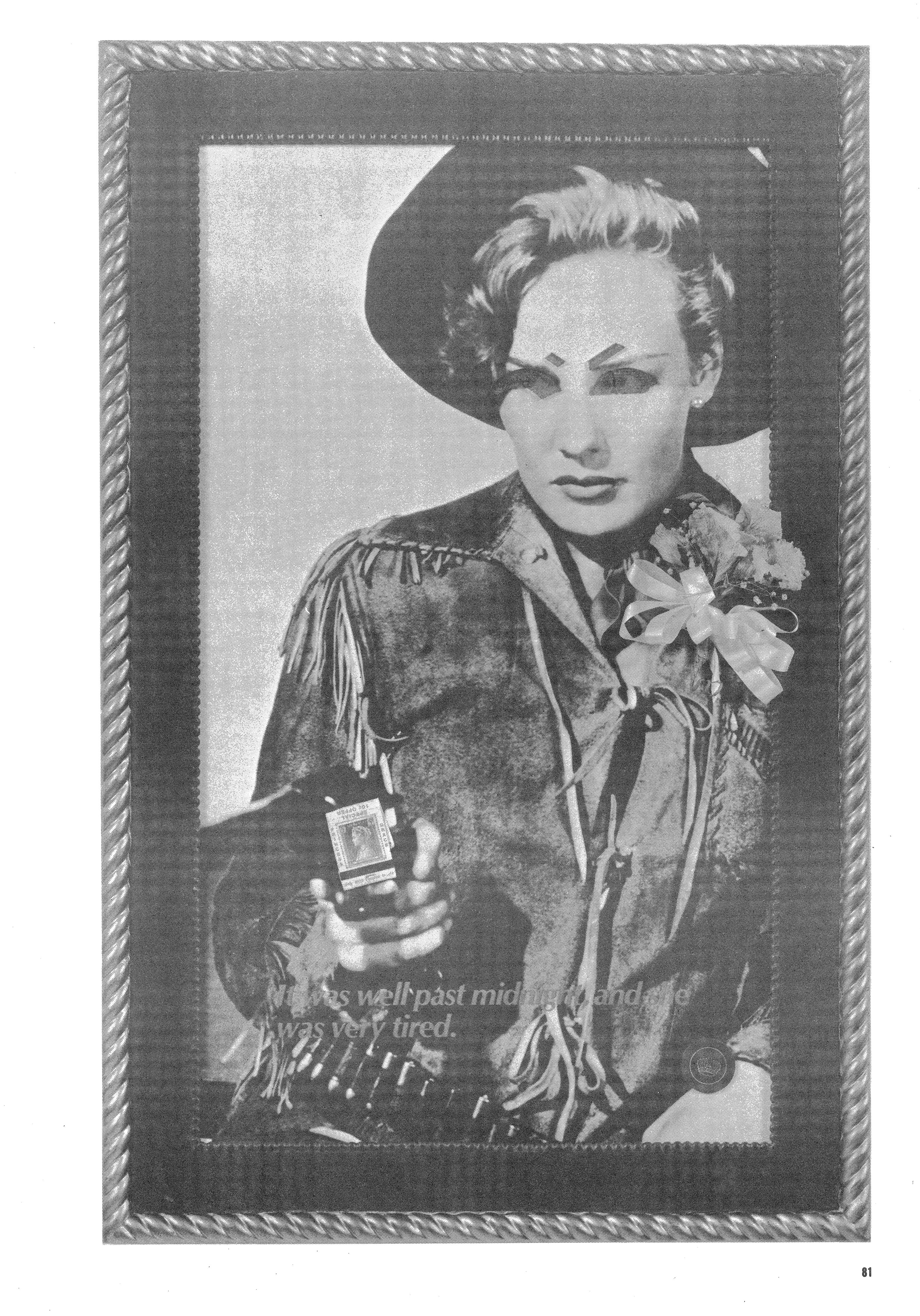 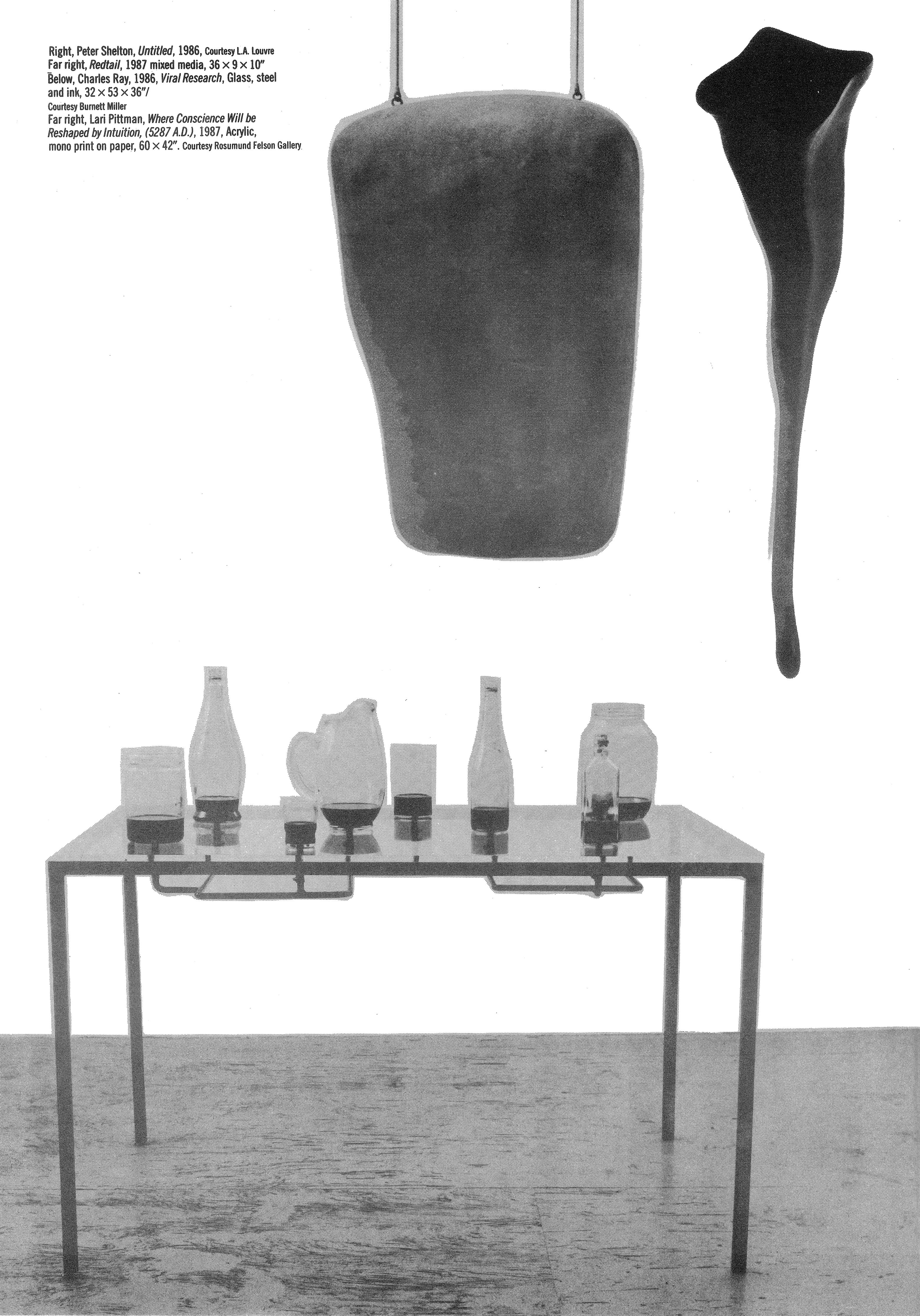 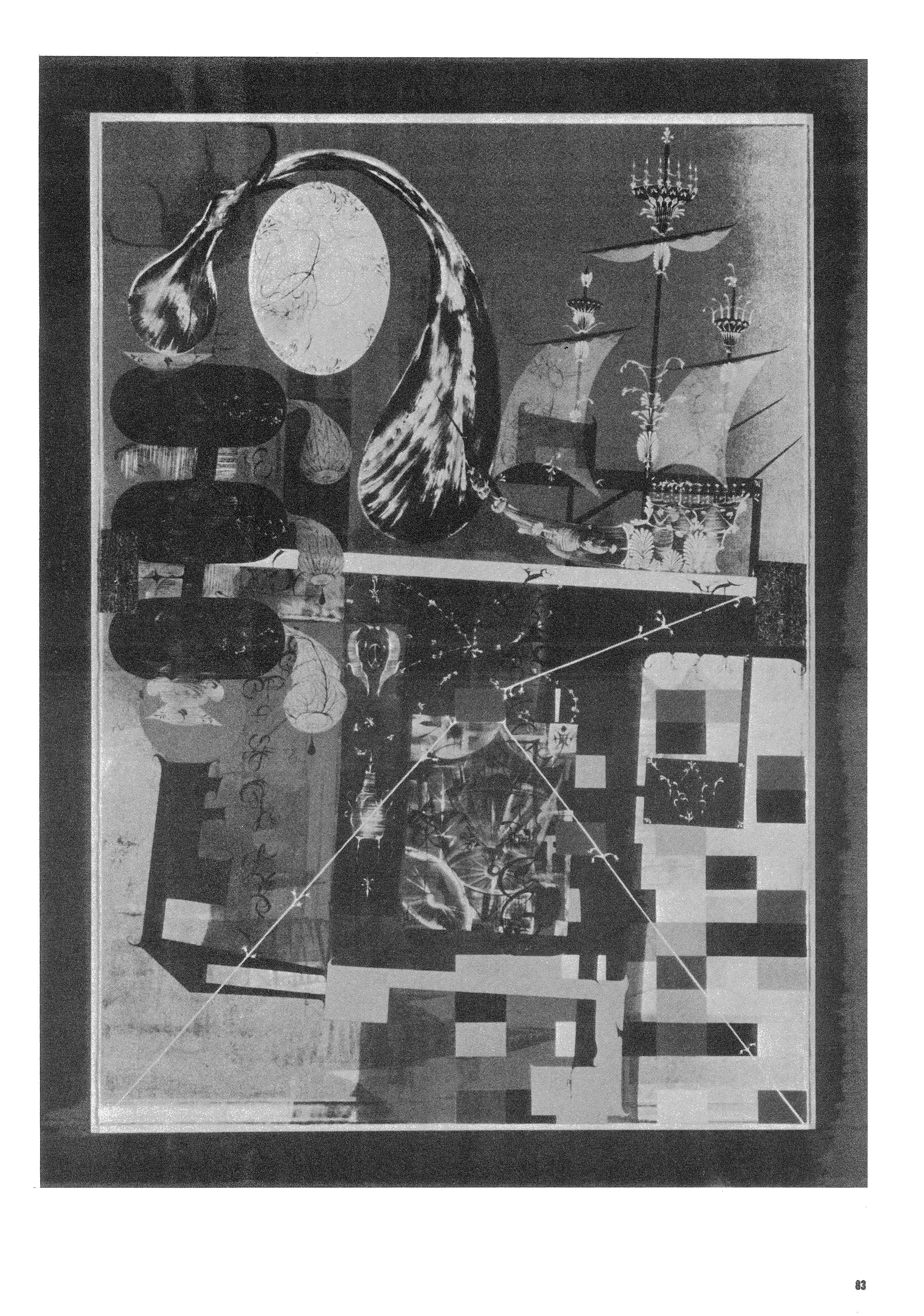 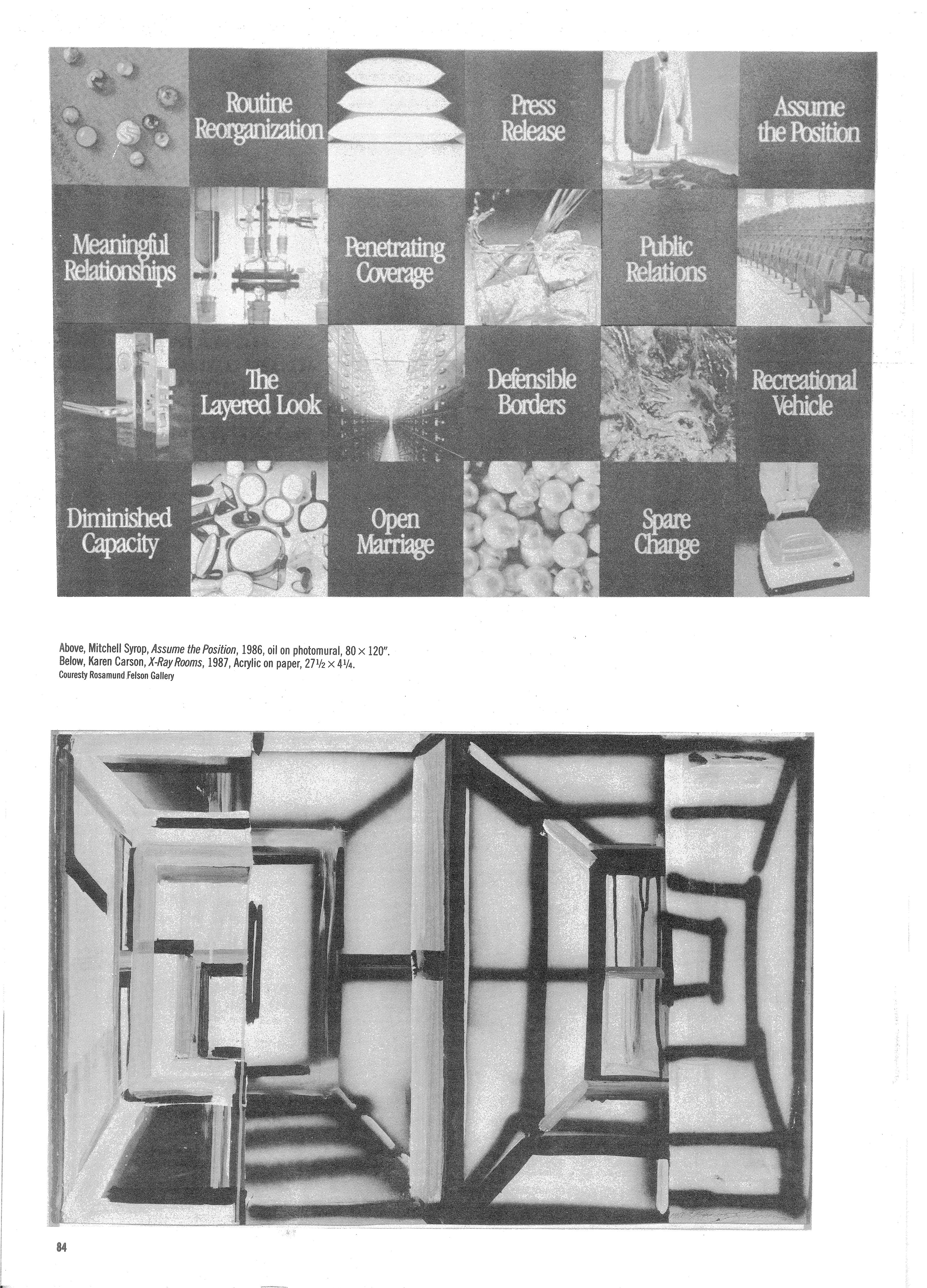 The Los Angeles art world is growing and changing more rapidly than at any time in its history. Even dealer attitudes are different than they were before. Top LA galleries, which for years avoided exhibiting local artists, now scramble to represent them. A number of younger artists are living off their sales quite independent of New York exposure. And when they want to show in the east, they can often choose among several offers. Much of the market boom is occurring in Santa Monica. You find as many galleries in that beach city as in West Hollywood, until recently the important district for showing art. Certain longstanding regional shortcomings have begun to be righted. European art now can be seen consistently at the Museum of Contemporary Art, the Los Angeles County Museum of Art, and several galleries. And the area probably has as many competent curators as any place in America.

Angelenos may or may not read art criticism; they certainly don’t write it. The dailies are barely adequate and there is no weekly equivalent to the Village Voice, the Sunday Times, or New York Magazine. There are no monthly art magazines at all. The absence of an art press means that it is hard to figure out what’s going on in Los Angeles whether you’re there or not. Written criticism sustains discussion and, without an art press, a show just has impact while it is up and only can be experienced first hand.

Criticism is needed if art movements are to coalesce and get promoted. Its absence means that Los Angeles artists tend to make their impact as individuals. Since the sunset of the Light and Space Movement LA hasn’t seen the surges of group energy and competition so familiar in New York. The absence of cohesion is predictable because the scene is so dispersed and art is not such a big deal in the town: film and television dominate money and conversation.

In the beginning Chouinard and Otis and were Los Angeles’s art schools. Then in an overlapping sequence UC Irvine was built, Chouinard closed and CalArts opened, Claremont Graduate Center got going, UCLA and USC improved, Cal State this and Cal State that started pumping out students, Otis was merged into Parsons, and Art Center embraced the fine arts. CalArts has been the place to go for the last 15 years, but the other schools have become possible places to teach afterwards. Which school you went to matters in LA’s art world. Schools provide one of the few local bases for contacts and community.

Wherever you live you have to spend time in the studio to make art and have to figure out a way to pay for that time. Unless your art is selling there aren’t all that many hours left over for other things, so one place becomes much like another. Indoors is indoors. As hard as it is to find a good place to live and work in LA, it’s much easier than in New York. To find space in New York you have to know someone or know someone who knows someone or be rich; in Los Angeles all that may help but isn’t essential. Artists seem to be happy there. And they get invited to better parties.

Outside the art world things in Los Angeles are less than great. The city is increasingly the victim of its own physical allure. The LA Basin continues to attract more people than it reasonably can accommodate. Traffic, smog, and public services are all getting worse, and no improvement is really in sight. On the freeways, where visitors once noticed more acts of courtesy than aggression, drivers are using guns to change lanes instead of directional signals. Bruce Nauman, Larry Bell, Robert Irwin, and James Turrell, half the big names, have moved from Los Angeles to places with similar light—New Mexico, Nevada, Arizona—but without the physical crush. They had to move to keep what they had.

I’ve never lived in LA. I went to grad school and worked in San Diego for six years. I moved back east in 1978 and with the distance have come to love LA. This section is a sampler of work, not an argument or case. Most of the artists have been seen in New York someplace sometime. I would gladly have doubled or tripled the present number, but there isn’t room. I’ve written specifically on Ed Ruscha and Chris Burden because I can’t imagine them living any place but Los Angeles, because their art is important and keeps getting better or at least doesn’t get worse.

With his sharp eye for design and very steady hands, Ruscha always has made things appear easy. His accomplishments are diverse: his exquisitely ironic early books are tours de force; Artforum looked its best when he layed it out; his drawings are masterful and idiosyncratic; his phrases stay in your mind like lyrics. But until recently he seemed better on paper than on canvas. Then in his grisaille paintings shown at the Whitney he got all his virtues together and on canvas. Name, Address, Phone and The Uncertain Trail were haunting and mysterious like no other works in the Biennial. Few 50-year-old artists like Ruscha now are doing their best work ever.

Perhaps 20 American sculptors born since World War II matter. Of these Chris Burden has been the toughest, the most wide ranging and physically inventive. He exhibits traits characteristically American. He’s impatient with the inessential, a natural tinkerer, active, able to travel light. He can take stuff straight out of the newspaper or Popular Science and make affecting and acute sculptures with it, works that are much more than topical. Burden doesn’t produce that many saleable products so his work is rarely deflected by the art market. Like his performances which involved extremes of action and of stillness, his sculptures make one aware of energy and entropy. In this he brings to mind Robert Smithson, another American artist who went after the big issues.