Italo Scanga at the Clocktower 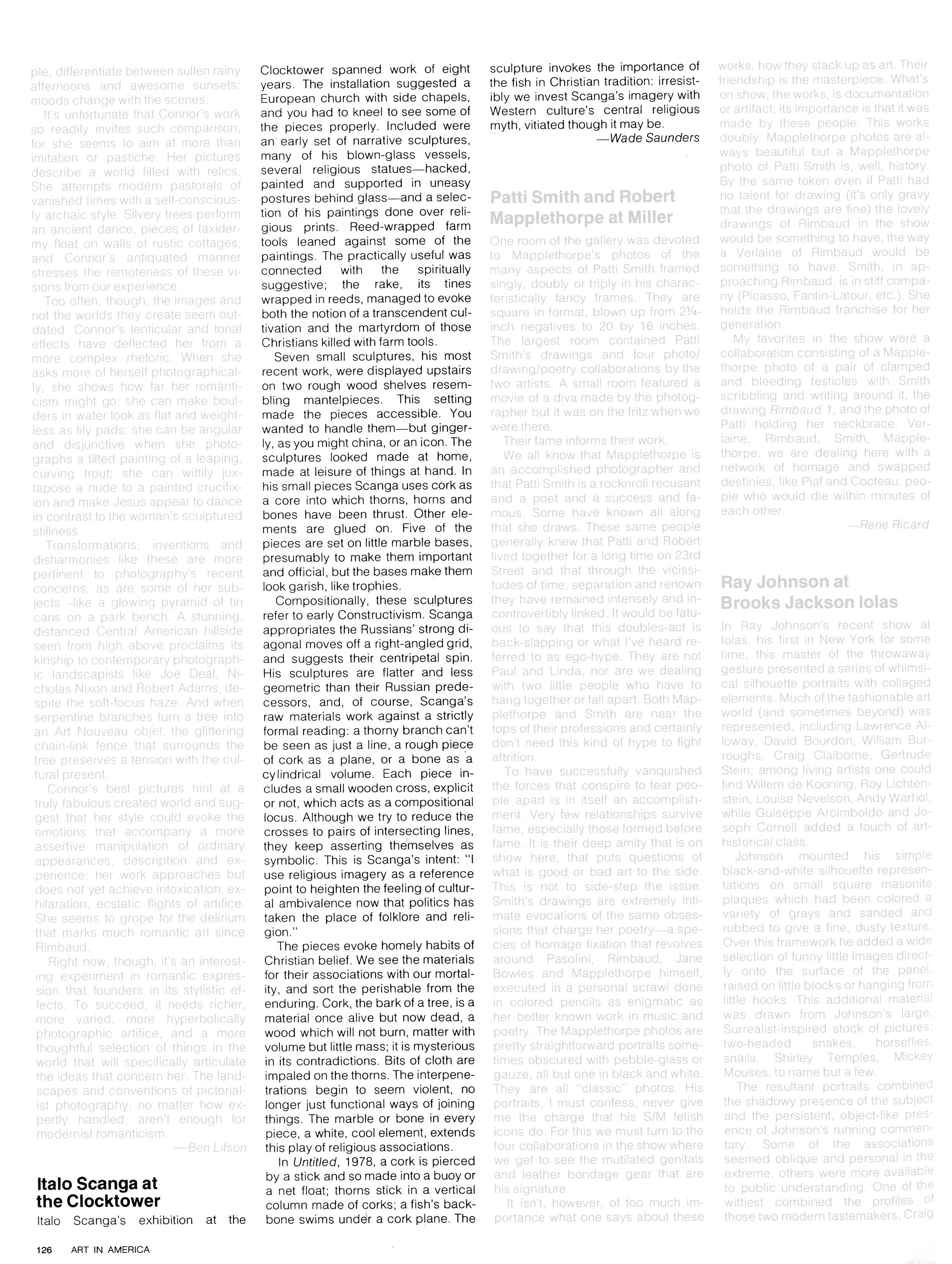 Italo Scanga’s exhibition at the Clocktower spanned work of eight years. The installation suggested a European church with side chapels, and you had to kneel to see some of the pieces properly. Included were an early set of narrative sculptures, many of his blown-glass vessels, several religious statues—hacked, painted and supported in uneasy postures behind glass—and a selection of his paintings done over religious prints. Reed-wrapped farm tools leaned against some of the paintings. The practically useful was connected with the spiritually suggestive; the rake, its tines wrapped in reeds, managed to evoke both the notion of a transcendent cultivation and the martyrdom of those Christians killed with farm tools.

Seven small sculptures, his most recent work, were displayed upstairs on two rough wood shelves resembling mantelpieces. This setting made the pieces accessible. You wanted to handle them—but gingerly, as you might china, or an icon. The sculptures looked made at home, made at leisure of things at hand. In his small pieces Scanga uses cork as a core into which thorns, horns and bones have been thrust. Other elements are glued on. Five of the pieces are set on little marble bases, presumably to make them important and official, but the bases make them look garish, like trophies.

Compositionally, these sculptures refer to early Constructivism. Scanga appropriates the Russians’ strong diagonal moves off a right-angled grid, and suggests their centripetal spin. His sculptures are flatter and less geometric than their Russian predecessors, and, of course, Scanga’s raw materials work against a strictly formal reading: a thorny branch can’t be seen as just a line, a rough piece of cork as a plane, or a bone as a cylindrical volume. Each piece includes a small wooden cross, explicit or not, which acts as a compositional locus. Although we try to reduce the crosses to pairs of intersecting lines, they keep asserting themselves as symbolic This is Scanga’s intent: “I use religious imagery as a reference point to heighten the feeling of cultural ambivalence now that politics has taken the place of folklore and religion.”

The pieces evoke homely habits of Christian belief. We see the materials for their associations with our mortality, and sort the perishable from the enduring. Cork, the bark of a tree, is a material once alive but now dead, a wood which will not burn, matter with volume but little mass; it is mysterious in its contradictions. Bits of cloth are impaled on the thorns. The interpenetrations begin to seem violent, no longer just functional ways of joining things. The marble or bone in every piece, a white, cool element, extends this play of religious associations.

In Untitled, 1978, a cork is pierced by a stick and so made into a buoy or a net float; thorns stick in a vertical column made of corks; a fish’s backbone swims under a cork plane. The sculpture invokes the importance of the fish in Christian tradition: irresistibly we invest Scanga’s imagery with Western culture’s central religious myth, vitiated though it may be.