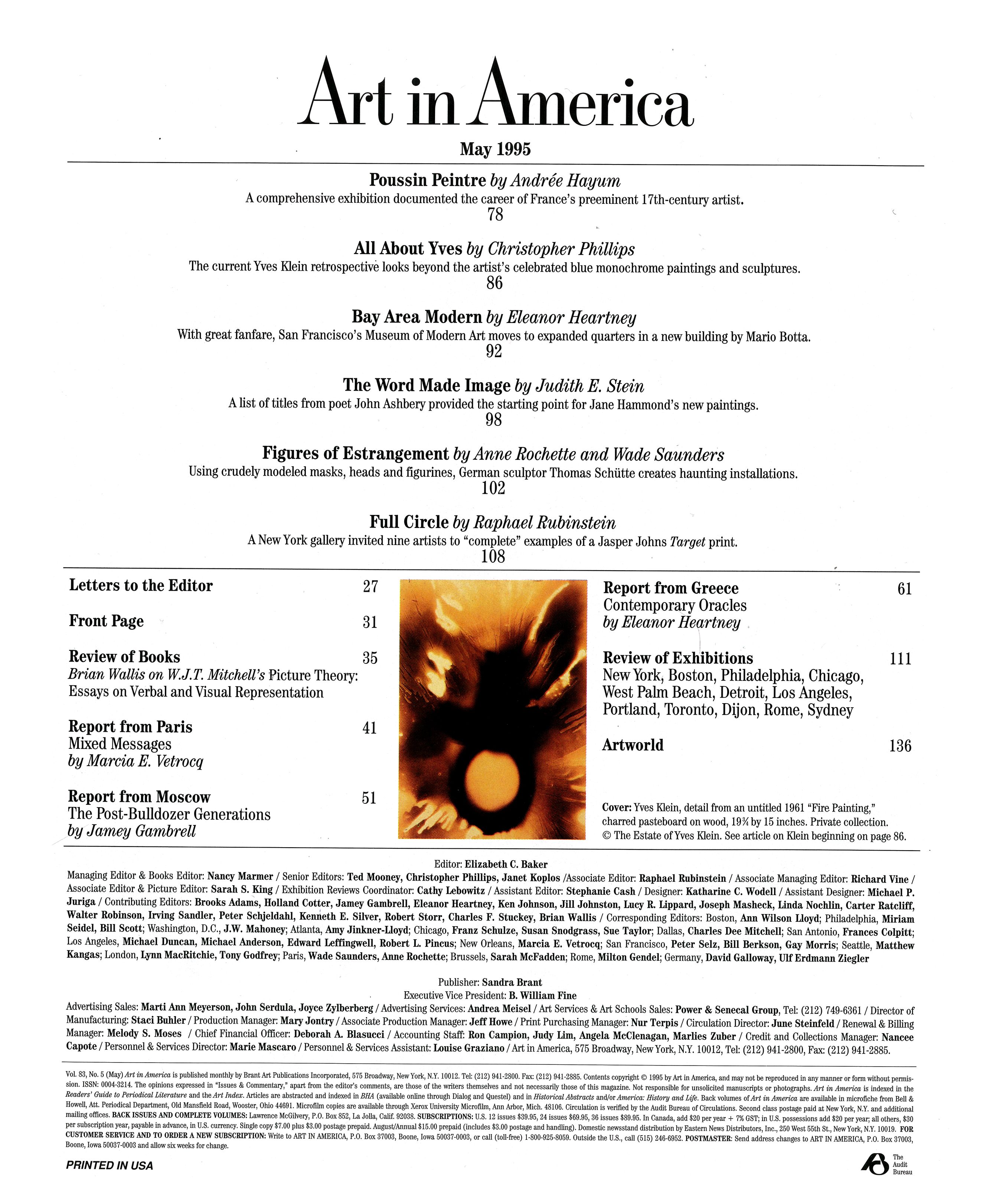 Though he is still interested in the psychology of architecture and public space, sculptor Thomas Schütte has lately given center stage in his installations to the figure. Recent museum shows revealed his protagonists in uneasy relation both to each other and to the social bonds connecting them.

Twenty-five years ago one never would have thought that images of people, animals or artifacts would be ubiquitous in the sculpture of the ’90s. Yet with Robert Gober, Charles Ray and Kiki Smith in the U.S., Damien Hirst and Rachel Whiteread in England, Katharina Fritsch and Thomas Schütte in Germany, and many other emerging sculptors, it is the animate or its implements that predominate. While a number of these artists rely on casting from life, Schütte is a modeler, if scarcely a traditional one. Now 40 years old, he recently had his second major museum show in France at the Carre d’Art, Nîmes, which opened a year ago in a gem of new building designed by the English architect Norman Foster [see A.i.A., Oct. ’93].

Schütte is a wanderer who, since his first solo show in 1979, has followed a helical rather than linear path, exploring images and configurations and letting them go, only to work them anew later. Fittingly, his installation at the Carre d’Art jumbled chronology and styles, though recent works outnumbered older ones. For instance, Ringe (Rings, 1977), a decorative modular piece that is reconfigured each time it is exhibited, followed a series of sweetly sentimental water-colors, collectively titled “I would rather go blind/ Than see you walk away” (1986), and led the viewer into an unsettling group of small sculptures, “United Enemies” (1993), surrounded by photo-offset portraits of themselves. Just as Schütte constantly shifts ideas and means, his titles slip from German into English or, on one occasion, Italian.

A longtime admirer of Gulliver’s Travels, this sculptor has always played masterfully with scale. In the ’80s he was best known for some memorable public projects, such as the unrealized ship’s prow-cum-staircase proposed for Cologne’s “Westkunst” in 1981; the closed, above-ground concrete bunker built at Sonsbeek 86, in Holland; the functioning ice cream parlor included in Documenta 8, Kassel; and the column bearing aloft a pair of bright red cherries realized in 1987 for “Skulptur-Projekte,” Munster. Many of his other sculptures from that decade resemble architectural models, often without floors or interior walls, arresting not least because of their uncertain status: they hover between proposals for actual structures, things in themselves and paradigms of human relations.

Schütte recently has given the figure center stage, moving away both from public sculpture and from smaller “buildings,” though he continues to test the ever-uneasy relationship between sculpture and architecture. His show at the Carre d’Art sprawled through all the galleries of the top floor, and he shrewdly used the grand atriumlike stairwell and terraces of the Foster building. Schütte hung all but two of his 10 “Masks” (1994) high up on the walls flanking the stairs, to theatrical effect. Swiftly gouged in heavily grogged clay, these 18-inch-high pieces were of two types, half of them swirling baroque fantasies and the other half simple reductions of the sort we associate with the primitive. Only viewable from afar or in profile, with their thick metallic glaze shimmering under the overhead light, the masks read more as abstract ornaments than as faces. The two masks hung near eye level in the room-sized top landing lacked the hieratic presence of the eight installed more strategically, reminding us that Schütte’s skills with installation are often crucial to the impact of his works.

Along with the two masks, two of the Drei grosse Köpfe (Three Big Heads, 1993) guarded the entrance to the galleries; the third Head stood aloof outside on the terrace. These 34-inch-high heads are types, rather than likenesses, of middle-aged males. Schütte further distanced them from the naturalistic by stretching them slightly forward, ploughing up the clay with his fingers and coating them with parti-colored glazes whose glassiness highlights the modeling. As in most of his modeled works, the polychromy is not descriptive and flirts with ugliness. One head has two faces, one looking slightly older than the other. This Janus, gazing forward and backward, is emblematic of the watchfulness that suffuses these incarnations of the masculine.

Seminal to much of Schütte’s recent work is Mohr’s Life (1988), which the artist tucked in a little room at the end of the first suite of galleries. This haunting installation piece marks the moment when his small figures definitively moved from being extras to principals. A 14-inch-high, white-headed figurine, wrapped in a real, full-size shirt, stands under a battered, 6-foot-tall steel rack on which hang 130 of Schütte’s old socks. To the side, another figure faces us; his black head sticks out of a rope-tied bundle of fabric supported on three dowel legs. Behind him four miniature easels bear small, thickly impastoed paintings of clouds pouring down rain. With slightly caricatural heads— modeled in Fimo, a self-hardening children’s clay—and seemingly floppy bodies, the figures feel like puppets abandoned by their puppeteer, autonomous and expressive yet deprived of mobility. In its deadpan merging of the real and the rendered, the piece recalls both early and late works by Paul Thek. Here Schütte may offer a parable of the artist locked in the confines of his work and life, split between his nocturnal struggles to image the world and the daily demands of bodily maintenance; but, with his sure handling of displacement, miniaturization and impersonation, he also makes theatricality once again a virtue.

A variously portrayed, though always sorry- looking, triumvirate of older men, stuck together back to back, holds center stage in what could be dubbed the “Respect Trilogy,” three 1994 pieces installed here in three consecutive rooms. First came Grosser Respekt (Big Respect), whose layout elaborates upon the early ’80s works Mann in Matsch (Man in Mud) and Zwei Manner in Matsch (Two Men in Mud), in which three rings intersect so as to form a three-leafed clover, with a fourth ring placed top and center and a staircase approaching from one side to suggest the stem of the clover. The rings have now become four wide, rusted-steel disks, neatly bordered with railings; the 16-foot-diameter expanse of the two-level platform suggests the outsized public plazas favored by authoritarian regimes and also creates a sense of expectation reminiscent of early de Chirico paintings.

The lower platform is peopled by 21 diminutive bronze figures—mostly men but including a few women and children—standing singly or in twos or threes. All but two of these figures seem oblivious to the weird trio towering in the center of their world. This crudely modeled male threesome, bodies roped together, stand ankle-deep in muck filling a low round pan to the brim; the whole lot has been cast in bronze and darkly patinated. Each man ignores the other two and feebly gestures outward, hands barely emerging from heavy coats, in a parody of the supposedly purposeful gesticulations common to commemorative statuary. These “wise” men with their feet sunk in mud appear to get scant respect from the little people surrounding them, the

title of the piece notwithstanding.

In the next room, Schütte perched Kleiner Respekt (Little Respect) on a 86-inch-high two-staged pedestal, making us look up to the three figures, now slightly diminished in height, their bodies encrusted in a tarlike paint and their faces glowing cadaverously. The triumvirate looks over Wo ist Hitler’s Grab? (Where is Hitler’s Grave?, 1991), a stark installation of six large tables and four drawings. Rows and rows of crosses stamped on the light gray tabletops are but a start at tabulating the casualties of World War II, a task whose completion, Schütte’s drawings warn us, would require 100,000 such tables. The pairing of the expressionist Kleiner Respekt with this clean and cool maquette, which attempts to convey unfathomable losses, charges both works with added resonance.

Finally, in the center of the third room, No Respect revolved slowly on a low base like a pathetic toy, its yet smaller triumvirate now partly soaked in red paint. The three men huddle back-to-back around a furled red flag, thigh-deep in red goo. They seem to gaze upward at 31 photographic portraits given the collective title “Innocenti,” which were hung friezelike around the gallery’s four walls. Schütte dramatically lit very small modeled heads, which appear rather old and none too friendly, then printed the black-and-white shots on colored paper. This continuum of miens, while reminiscent of Franz Xaver Messerschmidt’s “character heads,” evokes a deeply private world of phantasms with none of the determinist certainties of the 18th-century physiognomists, for whom appearance revealed temperament. The enlarging process radically scales up the fingerprints visible in the heads’ modeled surfaces, creating a near-physical link among the photographs, the original sculptures and the skin of their maker. It is typical of Schütte that one of his most emotionally accessible bodies of work should consist of technically sophisticated photographs whose minuscule subjects are not exhibited.

Photography again encircled sculpture in the last gallery of the exhibition, where eight sculptures from the “United Enemies” series (1993) were surrounded by 10 offset portraits (1994)—five of which were images of pieces present in the room, and five of similar but absent ones. The sculptures, displayed under bell jars set atop chest-high terra-cotta-colored plastic pipes, are pairs of 13-to-15-inch tall tripodal male puppets, bound together to suggest mismatched and estranged Siamese twins. Their heads are modeled in streaky melds of many colors of Fimo, and each seems to struggle to recover a degree of autonomy, never looking at its mate or even in the same direction as the other.

Schütte photographed these uneasy companions in extreme close-ups against a dark ground with very little depth of field, lighting them so as to intensify contrast, colors and texture. Thus drastically enlarged and lit, the faces exude a carnivalesque menace, the flat images unsettling doppelgangers of the already doubled old men. A logic of proliferation infuses Schütte’s work, manifest in his frequent grafting together of representations. Both individuation and connection are portrayed as problematic.

Schütte’s affinity with “artists of impurity” like Bruce Nauman, Rosemarie Trockel and Francesco Clemente is again apparent in his works on paper. Of the three sets of watercolors exhibited at the Carre d’Art, Requiem (1992), comprising 50 identically sized sheets of paper, showed Schütte at his best. This elegiac suite, jointly dedicated to a dead friend and an expected child, opens on three flowers, closes on a sunset, and weaves together portraits (mostly of men), abstract efflorescences, several sweet images of teddy bears accompanied by the words of a sad ditty, and a few dreamy scenes. Despite the steady recurrence of an intense black, the images flow with nervous grace.

Throughout the exhibition one felt a disjunction between the artist and his work, even as individual pieces offered an increasing sense of touch and intimacy. Schütte’s is a nocturnal world, peopled by phantasms, where identity is fluid. Although male figures far outnumber female ones, the masculine subject is more polymorphous than fixed, partaking of a shifting constellation of attributes, some traditionally allotted to the masculine, such as monumentality, historicity and irony, but others conventionally associated with the feminine, such as smallness, reserve and sentiment. Locking differences in hellish pairs is not the least of Schütte’s talents.

Thomas Schütte’s work was the subject of a retrospective titled “[Figure] ” which appeared at the Hamburger Kunsthalle, Hamburg [May-June 1994], and the Wurttembergischer Kunstverein, Stuttgart [Sept.-Oct. 1994]. The untitled exhibition discussed above consisted mostly of recent work and was seen at the Carre d’Art, Nimes [Oct. 28,1994-Jan. 15,1995].