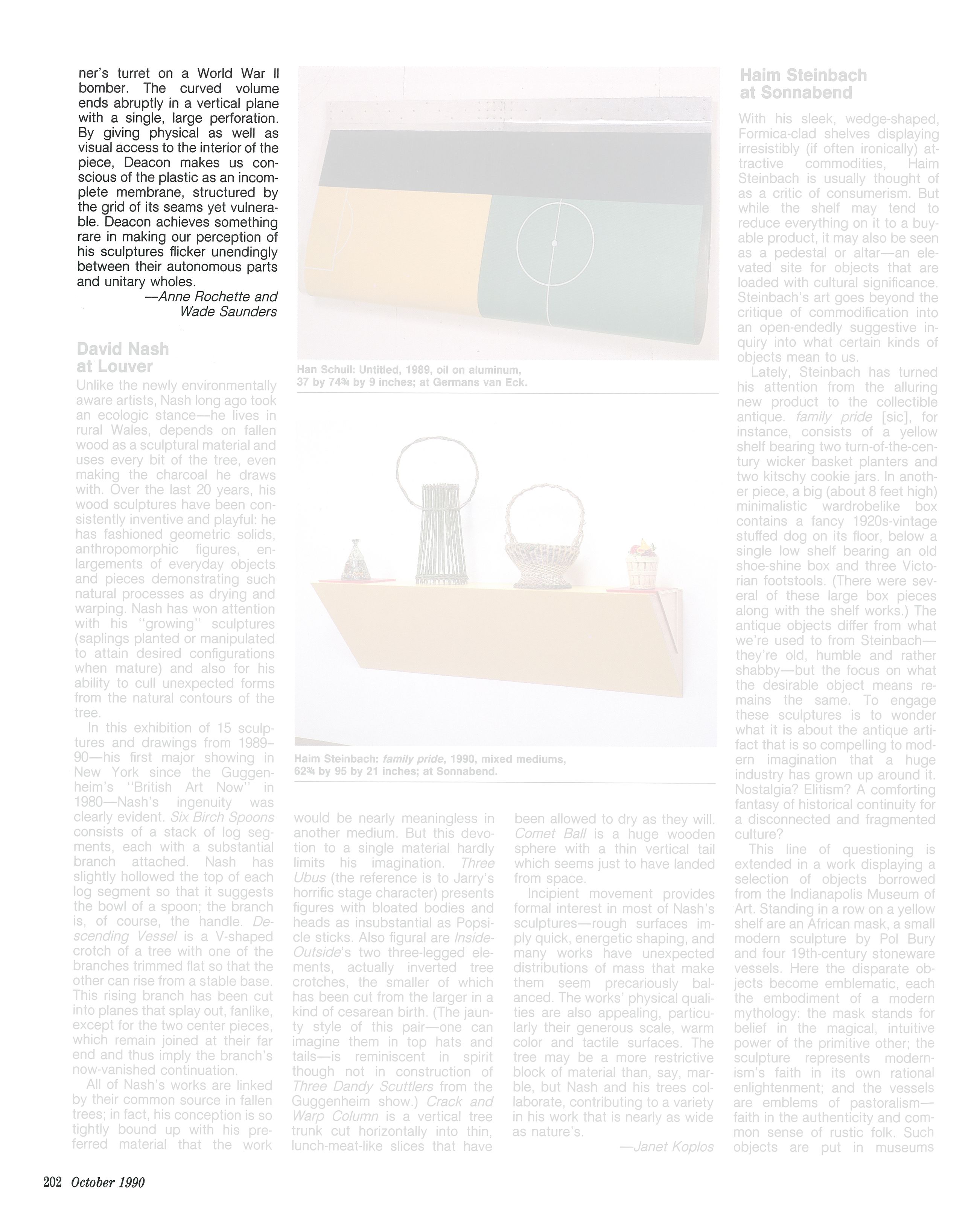 Richard Deacon is among the several British sculptors now making work consequential enough to influence others’ practice. His development of an existing tradition, his exploration of materials and construction methods, his sense of reference and of language have all been exemplary. While Deacon’s work is indebted to William Tucker’s and thus to Anthony Caro’s, he has freshened and extended their language of connected parts. In his best pieces Deacon seems to be both learning from the historical vocabulary of Constructivism and reinventing it.

A Deacon trademark is the assembling of repeated elements—of identical structure if of differing sizes—into fractious wholes. He favors hand tools over machines to laboriously fabricate and piece together compound curves and volumes from sheets of metal, masonite, plastic, cloth, linoleum and rubber. His obsessive recourse to glue and to near-humorous legions of rivets, screws, bolts and staples calls attention to his constructional methods, methods which function much as “touch” did in traditional sculpture to lessen the distance between viewer and maker.

His third solo show in New York consisted of four pieces, each fabricated very differently. Untitled, 1990, at first appears bulky and opaque, suggesting a wing taken off Mercury’s helmet and blown up to a public scale. Measuring 6 by 4 by 11 feet, it is a laminated particleboard form completely covered with small sheets of copper, each of which has been hammered to bulge out pillow like from its center and then stapled to the wooden structure. The copper swellings reiterate the puffiness of the whole. Deacon often keeps his pieces light, whatever their scale, by making them physically open. Here, instead, he uses the thinness of the copper skin and its suggestion of respiration to lift up the work. The sculpture is funny, a workman’s response to today’s overblown logotypes or to yesterday’s massive sculptured angels.

Characteristic of Deacon’s sculptures is how difficult they are to describe. Skirt, 1989, is an open semicircular duct, 32 inches high and 11 feet wide, made of 11 galvanized sheet steel modules and two end pieces identical to the others in cross section but much narrower. The 13 units are put together with rivets so numerous as to function visually like a zipper, making the seams both emphatic and provisional. Though composed of planes and simple curves, the sculpture is perceived as a sweeping compound surface. Skirt is larger than the body but not yet architectural. It is buoyant and looks portable, a trait of Deacon’s best works; it hovers above the floor without denying its own materiality.

A second large untitled piece is made out of clear plastic sheets that have been cut, heated, shaped over a pattern and welded together. The sculpture conflates the biomorphic and the engineered, calling forth both the head/ear/eye/mouth forms ubiquitous in Deacon’s work of the early ’80s and a gunner’s turret on a World War II bomber. The curved volume ends abruptly in a vertical plane with a single, large perforation. By giving physical as well as visual access to the interior of the piece, Deacon makes us conscious of the plastic as an incomplete membrane, structured by the grid of its seams yet vulnerable. Deacon achieves something rare in making our perception of his sculptures flicker unendingly between their autonomous parts and unitary wholes.