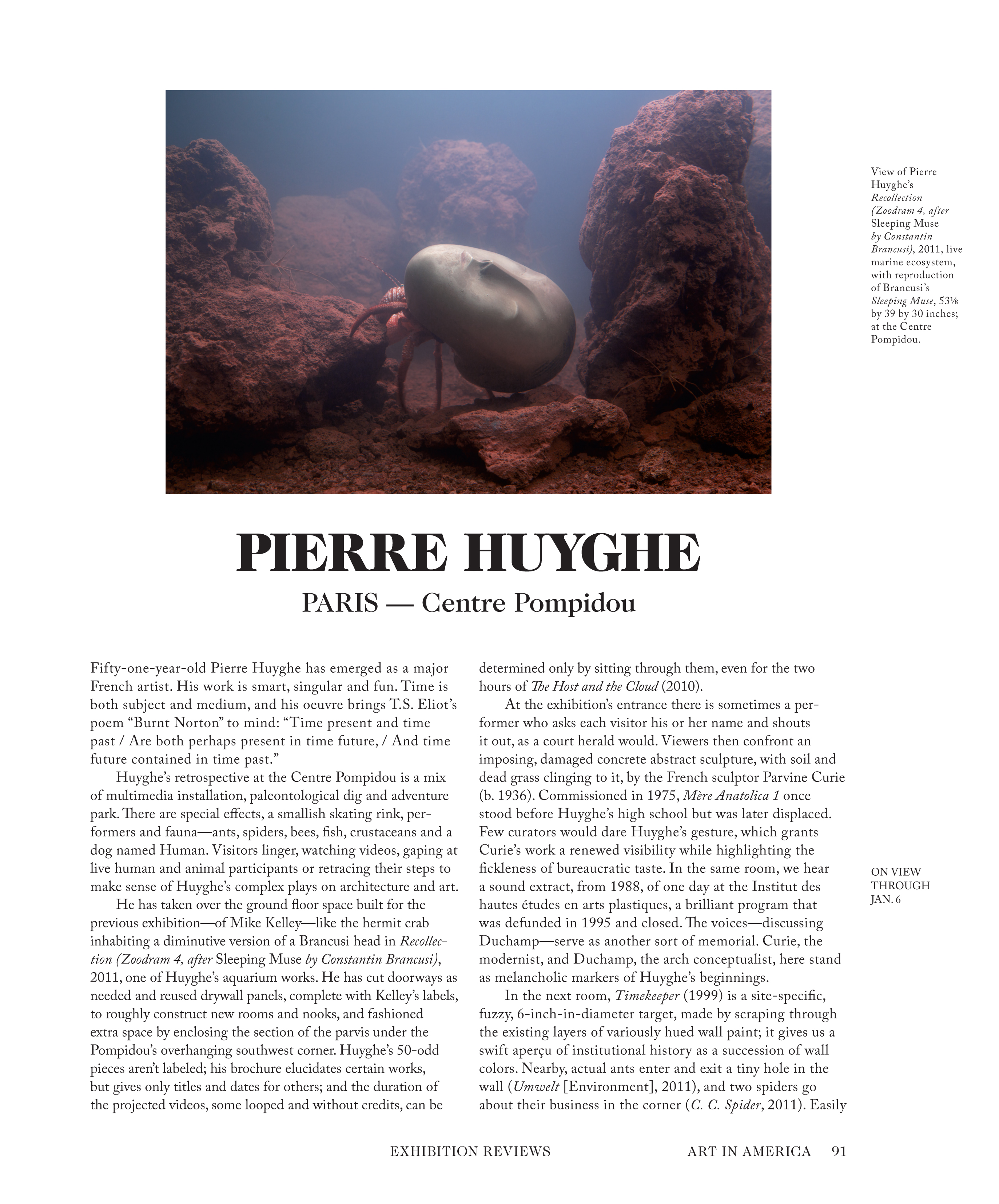 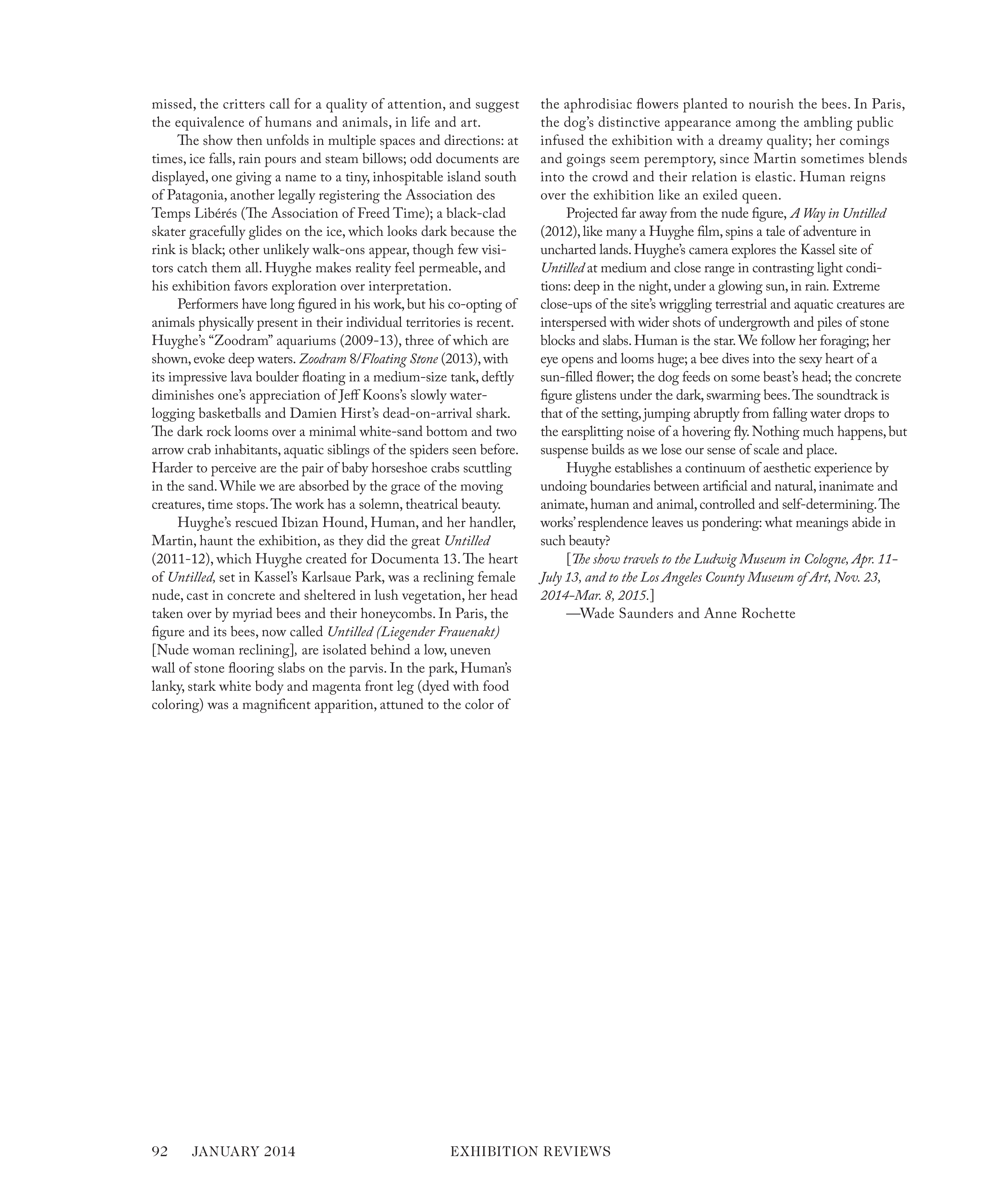 Fifty-one-year-old Pierre Huyghe has emerged as a major French artist. His work is smart, singular and fun. Time is both subject and medium, and his oeuvre brings T.S. Eliot’s poem “Burnt Norton” to mind: “Time present and time past / Are both perhaps present in time future, / And time future contained in time past.”

Huyghe’s retrospective at the Centre Pompidou is a mix of multimedia installation, paleontological dig and adventure park. There are special effects, a smallish skating rink, performers and fauna—ants, spiders, bees, fish, crustaceans and a dog named Human. Visitors linger, watching videos, gaping at live human and animal participants or retracing their steps to make sense of Huyghe’s complex plays on architecture and art.

He has taken over the ground floor space built for the previous exhibition—of Mike Kelley—like the hermit crab inhabiting a diminutive version of a Brancusi head in Recollection (Zoodram 4, after Sleeping Muse by Constantin Brancusi), 2011, one of Huyghe’s aquarium works. He has cut doorways as needed and reused drywall panels, complete with Kelley’s labels, to roughly construct new rooms and nooks, and fashioned extra space by enclosing the section of the parvis under the Pompidou’s overhanging southwest corner. Huyghe’s 50-odd pieces aren’t labeled; his brochure elucidates certain works, but gives only titles and dates for others; and the duration of the projected videos, some looped and without credits, can be determined only by sitting through them, even for the two hours of The Host and the Cloud (2010).

At the exhibition’s entrance there is sometimes a performer who asks each visitor his or her name and shouts it out, as a court herald would. Viewers then confront an imposing, damaged concrete abstract sculpture, with soil and dead grass clinging to it, by the French sculptor Parvine Curie (b. 1936). Commissioned in 1975, Mère Anatolica 1 once stood before Huyghe’s high school but was later displaced. Few curators would dare Huyghe’s gesture, which grants Curie’s work a renewed visibility while highlighting the fickleness of bureaucratic taste. In the same room, we hear a sound extract, from 1988, of one day at the Institut des hautes études en arts plastiques, a brilliant program that was defunded in 1995 and closed. The voices—discussing Duchamp—serve as another sort of memorial. Curie, the modernist, and Duchamp, the arch conceptualist, here stand as melancholic markers of Huyghe’s beginnings.

In the next room, Timekeeper (1999) is a site-specific, fuzzy, 6-inch-in-diameter target, made by scraping through the existing layers of variously hued wall paint; it gives us a swift aperçu of institutional history as a succession of wall colors. Nearby, actual ants enter and exit a tiny hole in the wall (Umwelt [Environment], 2011), and two spiders go about their business in the corner (C. C. Spider, 2011). Easily missed, the critters call for a quality of attention, and suggest the equivalence of humans and animals, in life and art.

The show then unfolds in multiple spaces and directions: at times, ice falls, rain pours and steam billows; odd documents are displayed, one giving a name to a tiny, inhospitable island south of Patagonia, another legally registering the Association des Temps Libérés (The Association of Freed Time); a black-clad skater gracefully glides on the ice, which looks dark because the rink is black; other unlikely walk-ons appear, though few visitors catch them all. Huyghe makes reality feel permeable, and his exhibition favors exploration over interpretation.

Performers have long figured in his work, but his co-opting of animals physically present in their individual territories is recent. Huyghe’s “Zoodram” aquariums (2009-13), three of which are shown, evoke deep waters. Zoodram 8/Floating Stone (2013), with its impressive lava boulder floating in a medium-size tank, deftly diminishes one’s appreciation of Jeff Koons’s slowly water-logging basketballs and Damien Hirst’s dead-on-arrival shark. The dark rock looms over a minimal white-sand bottom and two arrow crab inhabitants, aquatic siblings of the spiders seen before. Harder to perceive are the pair of baby horseshoe crabs scuttling in the sand. While we are absorbed by the grace of the moving creatures, time stops. The work has a solemn, theatrical beauty.

Huyghe’s rescued Ibizan Hound, Human, and her handler, Marlon, haunt the exhibition, as they did the great Untilled (2011-12), which Huyghe created for Documenta 13. The heart of Untilled, set in Kassel’s Karlsaue Park, was a reclining female nude, cast in concrete and sheltered in lush vegetation, her head taken over by myriad bees and their honeycombs. In Paris, the figure and its bees, now called Untilled (Liegender Frauenakt) [Nude woman reclining], are isolated behind a low, uneven wall of stone flooring slabs on the parvis. In the park, Human’s lanky, stark white body and magenta front leg (dyed with food coloring) was a magnificent apparition, attuned to the color of the aphrodisiac flowers planted to nourish the bees. In Paris, the dog’s distinctive appearance among the ambling public infused the exhibition with a dreamy quality; her comings and goings seem peremptory, since Marlon sometimes blends into the crowd and their relation is elastic. Human reigns over the exhibition like an exiled queen.

Projected far away from the nude figure, A Way in Untilled (2012), like many a Huyghe film, spins a tale of adventure in uncharted lands. Huyghe’s camera explores the Kassel site of Untilled at medium and close range in contrasting light conditions: deep in the night, under a glowing sun, in rain. Extreme close-ups of the site’s wriggling terrestrial and aquatic creatures are interspersed with wider shots of undergrowth and piles of stone blocks and slabs. Human is the star. We follow her foraging; her eye opens and looms huge; a bee dives into the sexy heart of a sun-filled flower; the dog feeds on some beast’s head; the concrete figure glistens under the dark, swarming bees. The soundtrack is that of the setting, jumping abruptly from falling water drops to the earsplitting noise of a hovering fly. Nothing much happens, but suspense builds as we lose our sense of scale and place.

Huyghe establishes a continuum of aesthetic experience by undoing boundaries between artificial and natural, inanimate and animate, human and animal, controlled and self-determining. The works’ resplendence leaves us pondering: what meanings abide in such beauty?