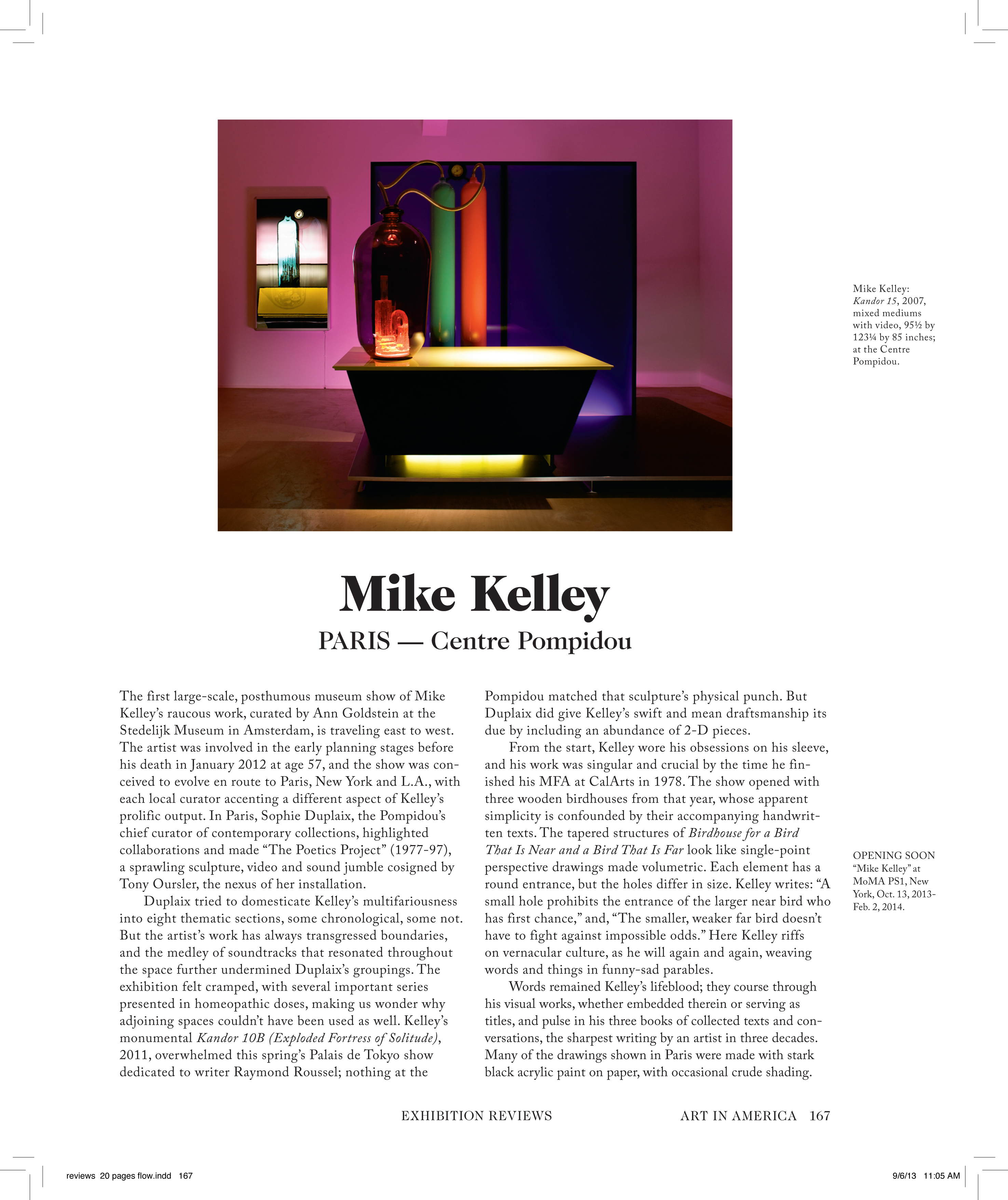 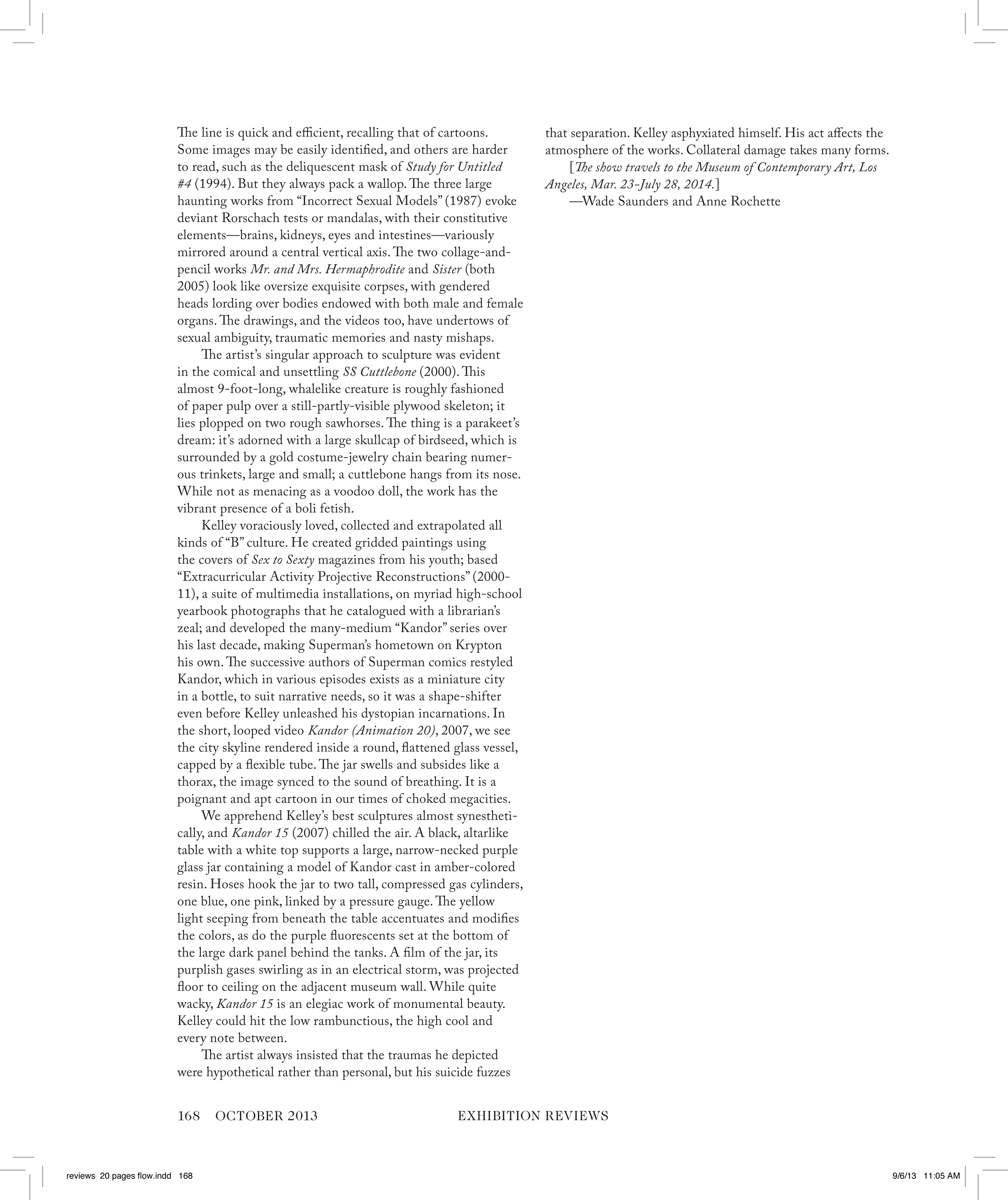 The first large-scale, posthumous museum show of Mike Kelley’s raucous work, curated by Ann Goldstein at the Stedelijk Museum in Amsterdam, is traveling east to west. The artist was involved in the early planning stages before his death in January 2012 at age 57, and the show was conceived to evolve en route to Paris, New York and L.A., with each local curator accenting a different aspect of Kelley’s prolific output. In Paris, Sophie Duplaix, the Pompidou’s chief curator of contemporary collections, highlighted collaborations and made “The Poetics Project” (1977-97), a sprawling sculpture, video and sound jumble cosigned by Tony Oursler, the nexus of her installation.

Duplaix tried to domesticate Kelley’s multifariousness into eight thematic sections, some chronological, some not. But the artist’s work has always transgressed boundaries, and the medley of soundtracks that resonated throughout the space further undermined Duplaix’s groupings. The exhibition felt cramped, with several important series presented in homeopathic doses, making us wonder why adjoining spaces couldn’t have been used as well. Kelley’s monumental Kandor 10B (Exploded Fortress of Solitude), 2011, overwhelmed this spring’s Palais de Tokyo show dedicated to writer Raymond Roussel; nothing at the Pompidou matched that sculpture’s physical punch. But Duplaix did give Kelley’s swift and mean draftsmanship its due by including an abundance of 2-D pieces.

From the start, Kelley wore his obsessions on his sleeve, and his work was singular and crucial by the time he finished his MFA at CalArts in 1978. The show opened with three wooden birdhouses from that year, whose apparent simplicity is confounded by their accompanying handwritten texts. The tapered structures of Birdhouse for a Bird That Is Near and a Bird That Is Far look like single-point perspective drawings made volumetric. Each element has a round entrance, but the holes differ in size. Kelley writes: “A small hole prohibits the entrance of the larger near bird who has first chance,” and, “The smaller, weaker far bird doesn’t have to fight against impossible odds.” Here Kelley riffs on vernacular culture, as he will again and again, weaving words and things in funny-sad parables.

Words remained Kelley’s lifeblood; they course through his visual works, whether embedded therein or serving as titles, and pulse in his three books of collected texts and conversations, the sharpest writing by an artist in three decades. Many of the drawings shown in Paris were made with stark black acrylic paint on paper, with occasional crude shading. The line is quick and efficient, recalling that of cartoons. Some images may be easily identified, and others are harder to read, such as the deliquescent mask of Study for Untitled #4 (1994). But they always pack a wallop. The three large haunting works from “Incorrect Sexual Models” (1987) evoke deviant Rorschach tests or mandalas, with their constitutive elements—brains, kidneys, eyes and intestines—variously mirrored around a central vertical axis. The two collage-and-pencil works Mr. and Mrs. Hermaphrodite and Sister (both 2005) look like oversize exquisite corpses, with gendered heads lording over bodies endowed with both male and female organs. The drawings, and the videos too, have undertows of sexual ambiguity, traumatic memories and nasty mishaps.

The artist’s singular approach to sculpture was evident in the comical and unsettling SS Cuttlebone (2000). This almost 9-foot-long, whalelike creature is roughly fashioned of paper pulp over a still-partly-visible plywood skeleton; it lies plopped on two rough sawhorses. The thing is a parakeet’s dream: it’s adorned with a large skullcap of birdseed, which is surrounded by a gold costume-jewelry chain bearing numerous trinkets, large and small; a cuttlebone hangs from its nose. While not as menacing as a voodoo doll, the work has the vibrant presence of a boli fetish.

Kelley voraciously loved, collected and extrapolated all kinds of “B” culture. He created gridded paintings using the covers of Sex to Sexty magazines from his youth; based “Extracurricular Activity Projective Reconstructions” (2000-11), a suite of multimedia installations, on myriad high-school yearbook photographs that he catalogued with a librarian’s zeal; and developed the many-medium “Kandor” series over his last decade, making Superman’s hometown on Krypton his own. The successive authors of Superman comics restyled Kandor, which in various episodes exists as a miniature city in a bottle, to suit narrative needs, so it was a shape-shifter even before Kelley unleashed his dystopian incarnations. In the short, looped video Kandor (Animation 20), 2007, we see the city skyline rendered inside a round, flattened glass vessel, capped by a flexible tube. The jar swells and subsides like a thorax, the image synced to the sound of breathing. It is a poignant and apt cartoon in our times of choked megacities.

We apprehend Kelley’s best sculptures almost synesthetically, and Kandor 15 (2007) chilled the air. A black, altarlike table with a white top supports a large, narrow-necked purple glass jar containing a model of Kandor cast in amber-colored resin. Hoses hook the jar to two tall, compressed gas cylinders, one blue, one pink, linked by a pressure gauge. The yellow light seeping from beneath the table accentuates and modifies the colors, as do the purple fluorescents set at the bottom of the large dark panel behind the tanks. A film of the jar, its purplish gases swirling as in an electrical storm, was projected floor to ceiling on the adjacent museum wall. While quite wacky, Kandor 15 is an elegiac work of monumental beauty. Kelley could hit the low rambunctious, the high cool and every note between.

The artist always insisted that the traumas he depicted were hypothetical rather than personal, but his suicide fuzzes that separation. Kelley asphyxiated himself. His act affects the atmosphere of the works. Collateral damage takes many forms.