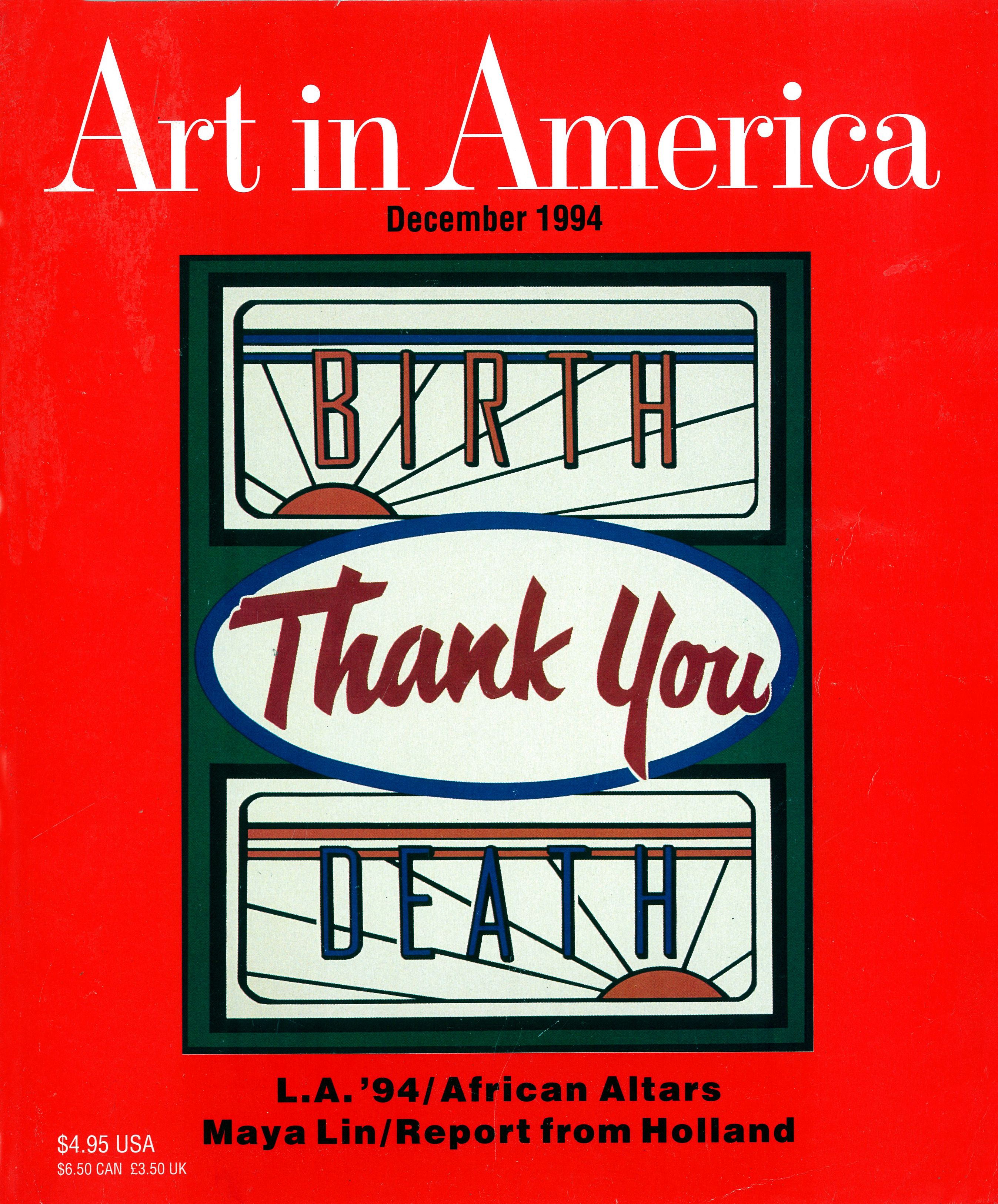 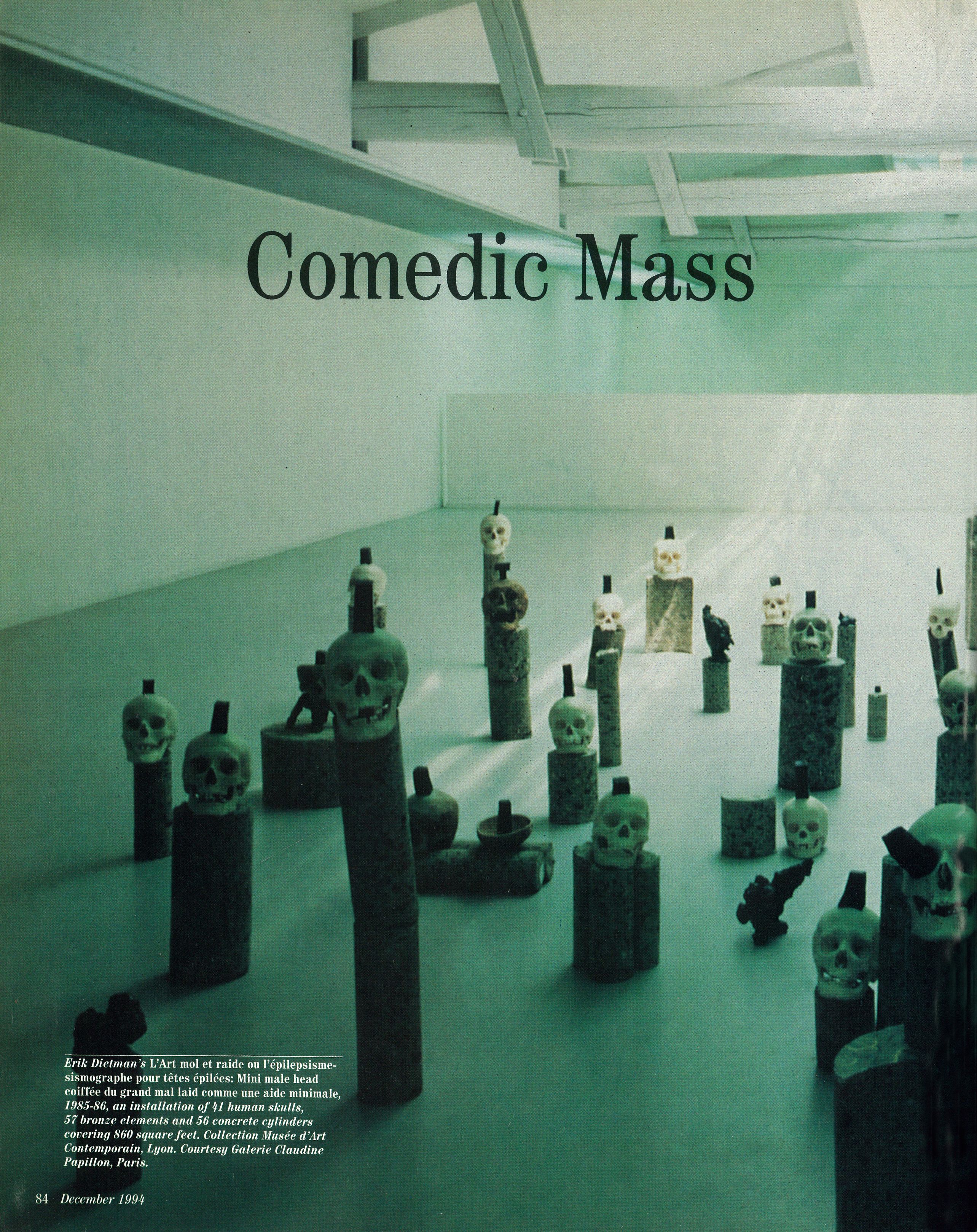 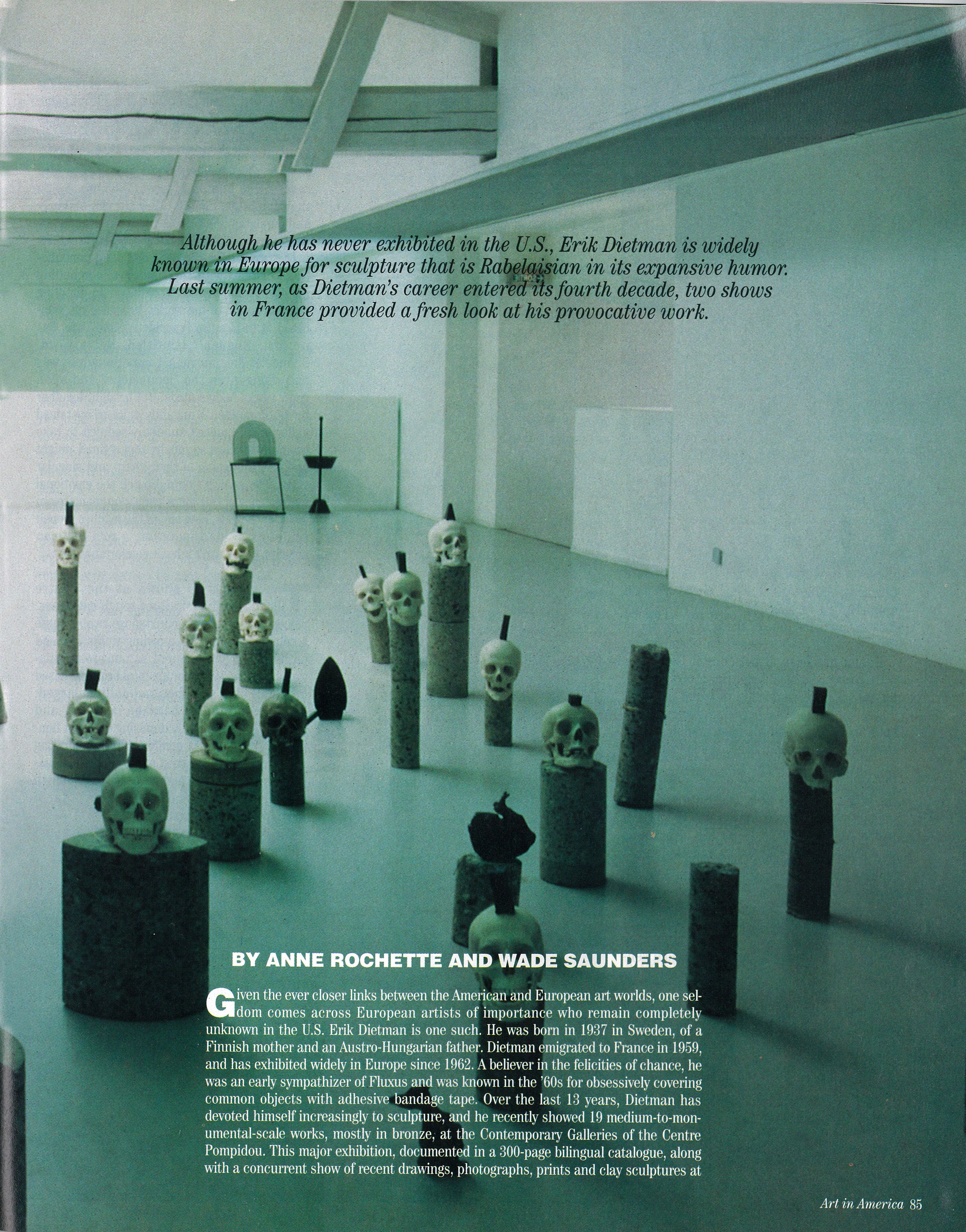 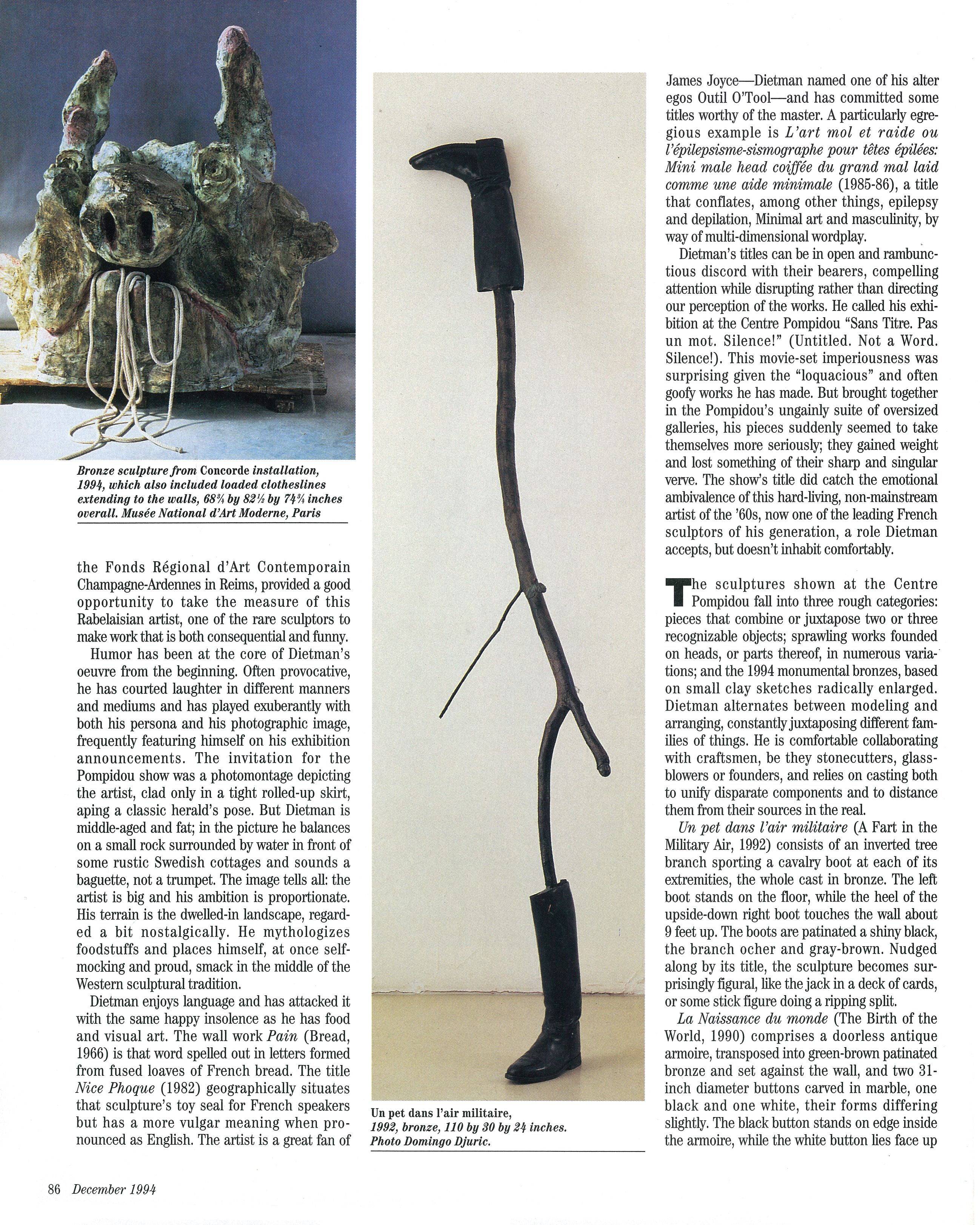 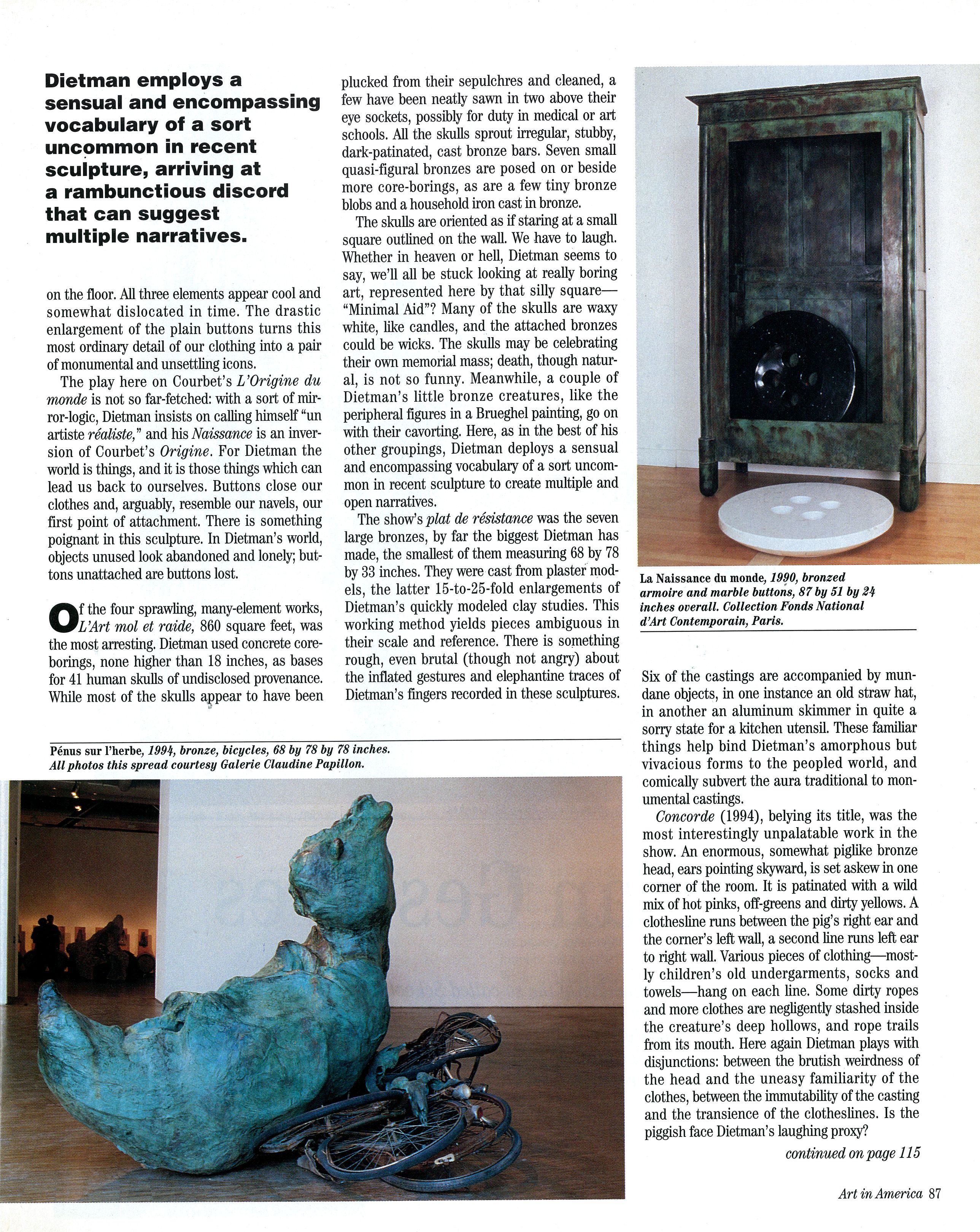 Although he has never exhibited in the US., Erik Dietman is widely known in Europe for sculpture that is Rabelaisian in its expansive humor. Last summer, as Dietman’s career entered its fourth decade, two shows in France provided a fresh look at his provocative work.

Given the ever closer links between the American and European art worlds, one seldom comes across European artists of importance who remain completely unknown in the U.S. Erik Dietman is one such. He was bom in 1937 in Sweden, of a Finnish mother and an Austro-Hungarian father. Dietman emigrated to France in 1959, and has exhibited widely in Europe since 1962. A believer in the felicities of chance, he was an early sympathizer of Fluxus and was known in the ’60s for obsessively covering common objects with adhesive bandage tape. Over the last 13 years, Dietman has devoted himself increasingly to sculpture, and he recently showed 19 medium-to-monumental-scale works, mostly in bronze, at the Contemporary Galleries of the Centre Pompidou. This major exhibition, documented in a 300-page bilingual catalogue, along with a concurrent show of recent drawings, photographs, prints and clay sculptures at the Fonds Regional d’Art Contemporain Champagne-Ardennes in Reims, provided a good opportunity to take the measure of this Rabelaisian artist, one of the rare sculptors to make work that is both consequential and funny.

Humor has been at the core of Dietman’s oeuvre from the beginning. Often provocative, he has courted laughter in different manners and mediums and has played exuberantly with both his persona and his photographic image, frequently featuring himself on his exhibition announcements. The invitation for the Pompidou show was a photomontage depicting the artist, clad only in a tight rolled-up skirt, aping a classic herald’s pose. But Dietman is middle-aged and fat; in the picture he balances on a small rock surrounded by water in front of some rustic Swedish cottages and sounds a baguette, not a trumpet. The image tells all: the artist is big and his ambition is proportionate. His terrain is the dwelled-in landscape, regarded a bit nostalgically. He mythologizes foodstuffs and places himself, at once self- mocking and proud, smack in the middle of the Western sculptural tradition.

Dietman enjoys language and has attacked it with the same happy insolence as he has food and visual art. The wall work Pain (Bread, 1966) is that word spelled out in letters formed from fused loaves of French bread. The title Nice Phoque (1982) geographically situates that sculpture’s toy seal for French speakers but has a more vulgar meaning when pronounced as English. The artist is a great fan of James Joyce—Dietman named one of his alter egos Outil O’Tool—and has committed some titles worthy of the master. A particularly egregious example is L’art mol et raide ou l’épilepsisme-sismographe pour têtes épilées: Mini male head coiffée du grand mal laid comme une aide minimale (1985-86), a title that conflates, among other things, epilepsy and depilation, Minimal art and masculinity, by way of multi-dimensional wordplay.

Dietman’s titles can be in open and rambunctious discord with their bearers, compelling attention while disrupting rather than directing our perception of the works. He called his exhibition at the Centre Pompidou “Sans Titre. Pas un mot. Silence!” (Untitled. Not a Word. Silence!). This movie-set imperiousness was surprising given the “loquacious” and often goofy works he has made. But brought together in the Pompidou’s ungainly suite of oversized galleries, his pieces suddenly seemed to take themselves more seriously; they gained weight and lost something of their sharp and singular verve. The show’s title did catch the emotional ambivalence of this hard-living, non-mainstream artist of the ’60s, now one of the leading French sculptors of his generation, a role Dietman accepts, but doesn’t inhabit comfortably.

The sculptures shown at the Centre Pompidou fall into three rough categories: pieces that combine or juxtapose two or three recognizable objects; sprawling works founded on heads, or parts thereof, in numerous variations; and the 1994 monumental bronzes, based on small clay sketches radically enlarged. Dietman alternates between modeling and arranging, constantly juxtaposing different families of things. He is comfortable collaborating with craftsmen, be they stonecutters, glassblowers or founders, and relies on casting both to unify disparate components and to distance them from their sources in the real.

Un pet dans l’air militaire (A Fart in the Military Air, 1992) consists of an inverted tree branch sporting a cavalry boot at each of its extremities, the whole cast in bronze. The left boot stands on the floor, while the heel of the upside-down right boot touches the wall about 9 feet up. The boots are patinated a shiny black, the branch ocher and gray-brown. Nudged along by its title, the sculpture becomes surprisingly figural, like the jack in a deck of cards, or some stick figure doing a ripping split.

La Naissance du monde (The Birth of the World, 1990) comprises a doorless antique armoire, transposed into green-brown patinated bronze and set against the wall, and two 31- inch diameter buttons carved in marble, one black and one white, their forms differing slightly. The black button stands on edge inside the armoire, while the white button lies face up on the floor. All three elements appear cool and somewhat dislocated in time. The drastic enlargement of the plain buttons turns this most ordinary detail of our clothing into a pair of monumental and unsettling icons.

The play here on Courbet’s L’Origine du monde is not so far-fetched: with a sort of mirror-logic, Dietman insists on calling himself “un artiste réaliste” and his Naissance is an inversion of Courbet’s Origine. For Dietman the world is things, and it is those things which can lead us back to ourselves. Buttons close our clothes and, arguably, resemble our navels, our first point of attachment. There is something poignant in this sculpture. In Dietman’s world, objects unused look abandoned and lonely; buttons unattached are buttons lost.

Of the four sprawling, many-element works, L’Art mol et raide, 860 square feet, was the most arresting. Dietman used concrete coreborings, none higher than 18 inches, as bases for 41 human skulls of undisclosed provenance. While most of the skulls appear to have been plucked from their sepulchres and cleaned, a few have been neatly sawn in two above their eye sockets, possibly for duty in medical or art schools. All the skulls sprout irregular, stubby, dark-patinated, cast bronze bars. Seven small quasi-figural bronzes are posed on or beside more core-borings, as are a few tiny bronze blobs and a household iron cast in bronze.

The skulls are oriented as if staring at a small square outlined on the wall. We have to laugh. Whether in heaven or hell, Dietman seems to say, we’ll all be stuck looking at really boring art, represented here by that silly square— “Minimal Aid”? Many of the skulls are waxy white, like candles, and the attached bronzes could be wicks. The skulls may be celebrating their own memorial mass; death, though natural, is not so funny. Meanwhile, a couple of Dietman’s little bronze creatures, like the peripheral figures in a Brueghel painting, go on with their cavorting. Here, as in the best of his other groupings, Dietman deploys a sensual and encompassing vocabulary of a sort uncommon in recent sculpture to create multiple and open narratives.

The show’s plat de resistance was the seven large bronzes, by far the biggest Dietman has made, the smallest of them measuring 68 by 78 by 33 inches. They were cast from plaster models, the latter 15-to-25-fold enlargements of Dietman’s quickly modeled clay studies. This working method yields pieces ambiguous in their scale and reference. There is something rough, even brutal (though not angry) about the inflated gestures and elephantine traces of Dietman’s fingers recorded in these sculptures. Six of the castings are accompanied by mundane objects, in one instance an old straw hat, in another an aluminum skimmer in quite a sorry state for a kitchen utensil. These familiar things help bind Dietman’s amorphous but vivacious forms to the peopled world, and comically subvert the aura traditional to monumental castings.

Concorde (1994), belying its title, was the most interestingly unpalatable work in the show. An enormous, somewhat piglike bronze head, ears pointing skyward, is set askew in one comer of the room. It is patinated with a wild mix of hot pinks, off-greens and dirty yellows. A clothesline runs between the pig’s right ear and the corner’s left wall, a second line runs left ear to right wall. Various pieces of clothing—mostly children’s old undergarments, socks and towels—hang on each line. Some dirty ropes and more clothes are negligently stashed inside the creature’s deep hollows, and rope trails from its mouth. Here again Dietman plays with disjunctions: between the brutish weirdness of the head and the uneasy familiarity of the clothes, between the immutability of the casting and the transience of the clotheslines. Is the piggish face Dietman’s laughing proxy?

Pénus sur l’herbe (1994) is a 6-foot-long lump of bronze, patinated green, lying atop a jumbled pile of five old bicycles and four cast ram’s skulls. Seen from one angle, the sculpture rises and twists like the torso of a classical Venus; from another it could be a rabbit; from a third it resembles a shelled mollusk. Or is it an incubus? Despite the implied violence of the accumulated gestures and the memento mori of the skulls, the piece also conveys the happy abandon of an animal wriggling on its back in the grass. It is the only one of the large bronzes where the “props” approach the casting in importance, and it is a real beauty.

In an interview in the catalogue, Dietman locates himself among that handful of painters “who sculpt better than the sculptors—for example, Daumier, Degas, Gauguin, Matisse, Picasso, Barnett Newman, de Kooning and myself.” (Miro is the surprising omission, since it is his sculpture to which Dietman’s is most closely akin.) Most of these painters were consummate modelers and generally worked life-size or smaller. While Dietman is wonderfully nimble with visual and verbal associations and has a sure sense of the resonance of objects and their combinatory possibilities, he is more a squisher, and a poet, than a great modeler.

A number of Dietman’s sculptures exhibited at the Centre Pompidou are both very good and funny. But several of his larger pieces point to the risks that ever increasing scale presents for him, relying as he does on the rapid and apt gesture. In Le Char de I’armée de cul, La Grand’mère colombe and Le Dernier cri the sheer physical bulk of the works is incommensurate with the perceptual rewards they offer. These three sculptures are best looked at from afar, since regarded closely their forms and surfaces lack tension. Only a very few sculptors are able to work well from palm-to plaza-size. For now, Dietman lunches in that elect company. We’ll have to see about dinner later.